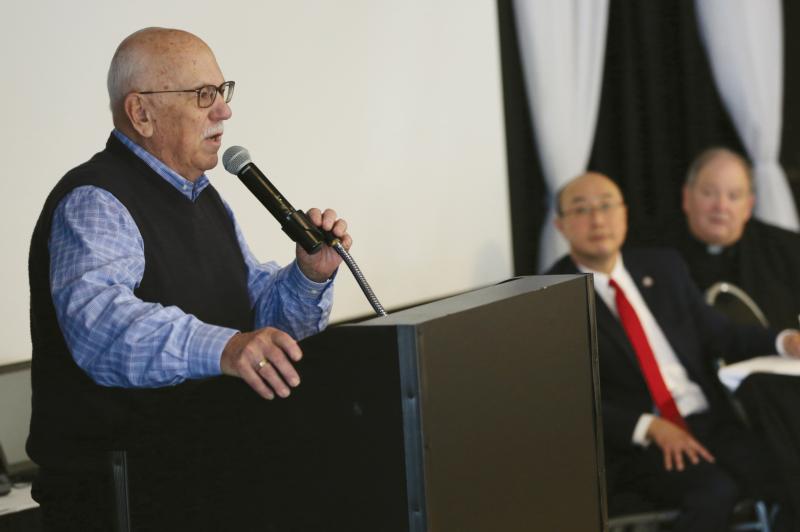 Frank Meuers, a victim-survivor of clergy sexual abuse, speaks about his experiences during a Jan. 23, 2020, conference organized by the Archdiocese of St. Paul and Minneapolis and the Ramsey County Attorney's Office. (CNS photo/Dave Hrbacek, The Catholic Spirit)

LAKE ELMO, Minn. (CNS) — For Frank Meuers, a victim-survivor of clergy sexual abuse, the impact is far-reaching and never-ending.

“It’s like a stone in a pond,” he said, “the hole disappears, but the ripple effects go on and on.”

The director of the southwest Minnesota chapter of Survivors Network of those Abused by Priests, or SNAP, Meuers described the anger he lived with for years — and the help he received through therapy.

He shared that and more as part of a five-person panel of victim-survivors at a recent conference organized by the Archdiocese of St. Paul and Minneapolis and the Ramsey County Attorney’s Office.

More than 60 people listened — most of them also victim-survivors gathered for a day especially set aside for them. They nodded in recognition or teared up in empathy and understanding as Meuers and others on the panel discussed broken but healing families, difficulties forging lasting relationships and struggles with their faith.

The Jan. 23 conference held in Lake Elmo, near the Twin Cities, was remarkable for many reasons. It brought together victim-survivors, church officials and Ramsey County officials, including Archbishop Bernard A. Hebda of St. Paul and Minneapolis, Ramsey County Attorney John Choi and Tim O’Malley, archdiocesan director of Ministerial Standards and Safe Environment.

It was one of several final steps taken in January toward the archdiocese satisfying terms of its settlement agreement over civil charges that the county filed in 2015 alleging the archdiocese was negligent in the case of an abusive priest.

Rather than marking an end, the conference marked a beginning toward wider healing in the archdiocese and continued safe environments for children in its parishes, schools and ministries. It included Ramsey County and church officials tag-teaming a detailed account of what transpired in the county’s investigation of the archdiocese and four years of court-monitored oversight.

Archbishop Hebda apologized, as he has in the past, for what the church had done and what it had failed to do in its history of clergy sexual abuse, and he promised to continue doing better. Choi recognized the good-faith work of the archdiocese and his confidence that under current leadership, that work will not end.

“I had an immense sense of peace and joy coming over here,” Choi said in his opening remarks at the Conference for Restorative Justice and Reconciliation. “Because this truly is about the journey we all have been on.”

Victim-survivors, parish and diocesan officials came from as far away as Virginia, South Dakota and Wisconsin, and as close as the Diocese of St. Cloud, Minnesota, and parishes in the Twin Cities.

Deacon Bernie Nojadera, executive director of the U.S. Conference of Catholic Bishops’ Secretariat for Child and Youth Protection, spent the day and planned to share what he learned with bishops around the country.

“We can learn a lot from your relationship with Ramsey County,” Deacon Nojadera said. “You can sense the Holy Spirit moving in all of this.”

The journey will not end for the archdiocese or victim-survivors, who carry with them the pain and weight of abuse, participants said. But Meuers and victim-survivors Jim Richter, Ben Hoffman and his mother, Joy, and Gina Barthel also talked as panelists about the healing they have found through various avenues, including the Catholic Church.

“As I look around this room, I know people here, and in that regard, I think I’m a more human person than I would have been,” Richter said after describing how the abuse he suffered makes it difficult for him to build and hold onto relationships.

A member of St. Joan of Arc Parish in Minneapolis, Richter said his struggles influenced his decision to work behind a microscope as a pathologist rather than directly with patients in internal medicine.

“Most days I struggle with ‘this is what I have,'” Richter said, “and occasionally with ‘what could have been.'”

She helped lead a session of small-group sharing known as healing circles. Geske also encouraged parishes to be part of the solution by welcoming victim-survivors and including them in the prayers of the faithful, perhaps even having a therapist on staff. Such prayers might seem like a little thing, she said, but they can be meaningful to victim-survivors and they can open doors to greater understanding among the faithful.

Paula Kaempffer, a victim-survivor of clergy sexual abuse and the archdiocese’s outreach coordinator for restorative justice and abuse prevention, acted as moderator for the day. She thanked victim-survivors for sharing their experiences and said efforts to help people harmed by the church will continue.

Barthel, a parishioner at St. Michael in St. Michael, Minnesota, said it was empowering, humbling and freeing to talk openly about her experiences while having the support of other victim-survivors. She understands that some who have been hurt would not set foot again into a Catholic church, Barthel said, but for her, it’s important to find healing there and let others know it is possible.

PREVIOUS: After struggle to cope, abuse survivor finds ‘healing in heart of church’

NEXT: All parishioners urged to bring new people into church