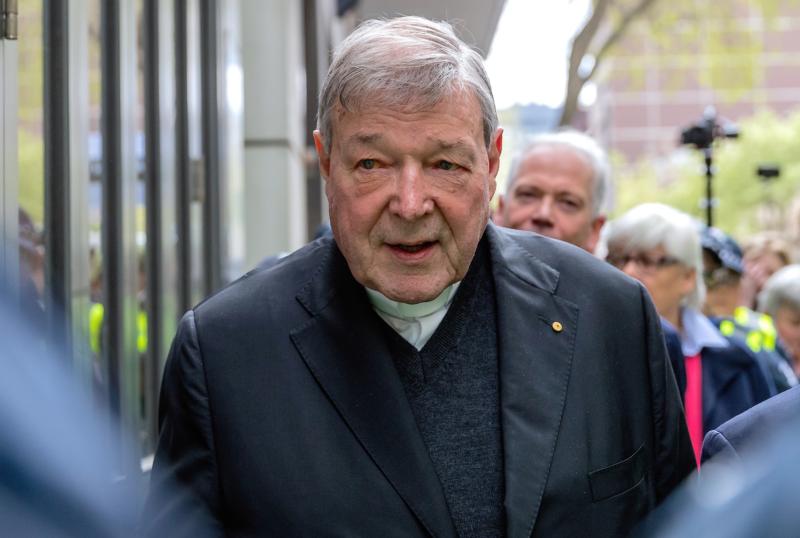 Australian Cardinal George Pell is surrounded by police as he leaves the Melbourne Magistrates Court in Australia, Oct. 6, 2017. His lawyers will present an appeal of his conviction for sexually abusing two 13-year-old choirboys to the High Court of Australia March 11-12. (CNS photo/Mark Dadswell, Reuters)

YANGON, Myanmar (CNS) — Cardinal George Pell will have his last chance to have his conviction for sexually abusing two 13-year old choirboys overturned when his lawyers plead his case to the High Court of Australia March 11-12.

But the full bench of Australia’s highest court — either five or all seven justices — will take several months, at least, to determine the fate of the former senior adviser to Pope Francis.

In the meantime, Australia’s most senior Catholic will remain, as he has been since his March 2019 sentencing, in virtual solitary confinement in a provincial prison.

If the High Court fails to overturn the verdict of a 12-person jury that found him guilty of four counts of sexual assault and one count of child rape, Pell, 78, will spend at least 32 more months in prison.

That’s the remainder of his minimum three years and eight months, of a six-year sentence, handed down by Chief Justice Peter Kidd of the Victorian Supreme Court, who described Pell’s offenses as “a brazen and forcible sexual attack on the victims.”

The first appeal by Cardinal Pell was dismissed 2-1 by a panel of judges of the Victorian Supreme Court in August.

Once the court proceedings conclude, Vatican officials have said they will proceed with an investigation of the prelate who has been the most powerful figure in the Australian Catholic Church for more than two decades.

Senior Australian lawyers, who asked not to be identified because of the sensitive nature of the case, told Catholic News Service that the High Court has rarely overturned jury convictions. The historical rate of overturning jury decisions by the top court is 13%.

Cardinal Pell’s case has generated global publicity and particularly in Australia where a landmark Royal Commission into Institutional Child Sexual Abuse was critical of the Catholic Church in its findings.

Critics of Pell’s convictions, including outspoken senior Catholic lawyers, politicians and conservative commentators, claim he is the victim of a witch hunt against the church

Regardless of the High Court’s decision, Cardinal Pell is facing at least three civil lawsuits brought against him for historical sexual abuse by people claiming to be victims or their families if they are deceased.