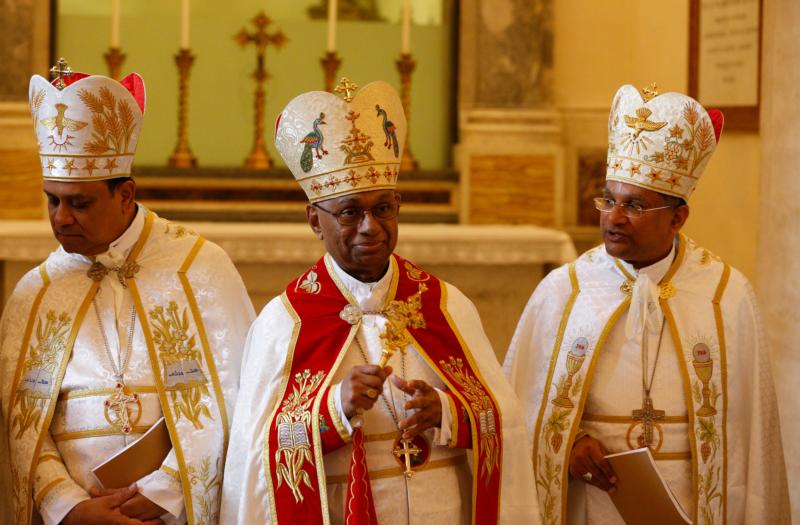 Bishop Jacob Angadiath of the Syro-Malabar Catholic Eparchy of St. Thomas of Chicago, center, prepares to concelebrate a Divine Liturgy with bishops of the Eastern Catholic churches in the United States at the Basilica of St. Paul Outside the Walls in Rome Feb. 17, 2020. The bishops were making their "ad limina" visits to the Vatican to report on the status of their dioceses to Pope Francis and Vatican officials. (CNS photo/Paul Haring)

ROME (CNS) — While the Eastern Catholic churches have different liturgies that highlight centuries-old cultural and religious traditions, they all remain united in their commitment to serve Christ and his church, said Bishop Jacob Angadiath of the Syro-Malabar Catholic Eparchy of St. Thomas of Chicago.

Bishop Angadiath told Catholic News Service Feb. 17 that celebrating the Divine Liturgy at the Basilica of St. Paul Outside the Walls in Rome with other Eastern Catholic bishops from the United States “is something very special that shows the beauty of the church in its different cultural customs and religious vestments.”

“We are pleased to be joined (together), to be of one body and mind, to pray together, work together and build the kingdom of God here on earth,” he said.

Celebrating the Divine Liturgy at the basilica, the bishops of the Ukrainian, Ruthenian, Maronite, Melkite, Syriac, Syro-Malabar, Armenian and Romanian Catholic Churches began the first day of their “ad limina” visits to report on the status of their dioceses.

Surrounded by centuries old mosaics, the bishops solemnly processed toward the altar several feet away from the tomb of St. Paul.

In his homily, Bishop Angadiath reflected on the day’s reading from the Second Letter of St. Peter, in which the disciple urges Christians to prepare for the second coming of the Lord.

Christ, he told the bishops, “reminds us to be watchful” and is a calling for the bishops of the Eastern Catholic churches to be united and “to serve the Lord with all our heart and mind.”

“As we pay homage to the apostles Peter and Paul, and the successor of St. Peter, we are one in faith, one in commitment to God and one in love for the church,” he said.

Bishop Angadiath told CNS that he was “really pleased” to be in Rome to visit “the threshold of the apostles, Sts. Peter and Paul,” and to meet with Pope Francis, who he regarded as “a charismatic leader of the whole world, not only of the Catholic Church.”

“Every time, the Holy Spirit provides proper leaders for the church,” the bishop said.

Pope Francis’ “approach, the generosity, the kindness, the mercy of God is being revealed through his words, through his actions, and we all appreciate him, and we ask God to bless him to lead the holy mother church,” he said.