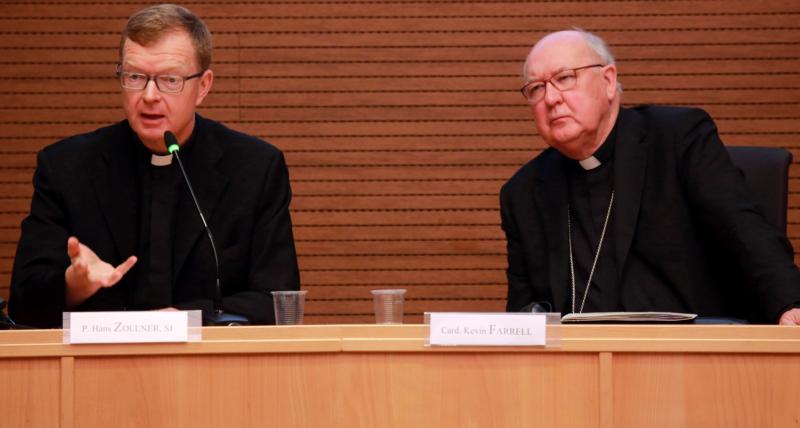 Jesuit Father Hans Zollner, president of the Centre for Child Protection at the Pontifical Gregorian University in Rome, and Cardinal Kevin J. Farrell, prefect of the Vatican's Dicastery for Laity, the Family and Life, participate in a meeting sponsored by the dicastery in Rome June 13, 2019. The dicastery brought together representatives of lay movements and associations to review child protection policies. (CNS photo/courtesy Dicastery for Laity, Family and Life)

VATICAN CITY (CNS) — Organizations, Catholic or not, led by a charismatic leader who is followed uncritically and commands or demands control over members are at risk for cases of physical, sexual and psychological abuse, said Jesuit Father Hans Zollner.

The Vatican office that grants official recognition to international Catholic lay movements and organizations ordered the groups to develop detailed child-protection guidelines and norms for handling allegations of the abuse of minors and vulnerable adults.

The international organizations include hundreds of thousands of Catholics around the world, so “this is an important step,” said Father Zollner, a professor of psychology and president of the Centre for Child Protection at the Pontifical Gregorian University in Rome.

By the December deadline, “90-something percent sent in their guidelines,” Cardinal Kevin Farrell, prefect of the Dicastery for Laity, the Family and Life, told Catholic News Service Feb. 28.

L’Arche, the international federation of communities of people with and without intellectual disabilities founded by Jean Vanier, is not an organization that falls under the dicastery because it is not exclusively Catholic.

However, L’Arche has worked with the Vatican and it informed the dicastery of the allegations against Vanier and the subsequent finding that Vanier “engaged in manipulative sexual relationships” with at least six adult women; the report released Feb. 22 said the investigation found no evidence that he abused people with disabilities.

The Dicastery for Laity, the Family and Life has a juridical section led by a canon lawyer and is reviewing the guidelines from the organizations required to file them. The staff of the Pontifical Commission for the Protection of Minors is assisting with the process, Cardinal Farrell said.

Several large international Catholic groups already have published their Vatican-approved guidelines online, including Communion and Liberation, Focolare and Chemin Neuf. They promise safe-environment training for members, contain detailed rules for activities with minors and clearly outline the responsibility of a person who is told about or suspects a case of abuse, including the obligation in most cases to report allegations to local police.

Of course, victims always are free to report allegations to their local police and local bishops, Cardinal Farrell said. And if members of one of the groups want to work in a parish or diocesan program, they also must fulfill local requirements for safeguarding training and background checks.

From now on, Catholic movements and organizations of mostly laity who want official recognition as “international associations of the faithful” will have to include safeguarding and reporting guidelines when they apply for Vatican recognition, the cardinal said.

First under Pope Benedict XVI and now under Pope Francis, several small, newer communities — both religious orders and mixed groups of lay and religious — have been disbanded or placed under Vatican-mandated outside control because of sexual, physical or psychological abuse of members.

Cardinal Farrell said that looking back, many of the groups “were approved at too young an age” and lacked maturity, experience in governance and oversight.

Today, for both lay and religious communities, the Vatican would “examine much more carefully the constitutions and the bylaws,” he said. And “they would have to have all these policies in place” for preventing abuse.

Father Zollner said several of the communities that have been disbanded or placed under direct Vatican control declare themselves to be “heralds of tradition,” but in fact ignore forms of governance and rules for community life developed in Catholic religious orders over the course of centuries.

With or without a charismatic leader, he said, Catholic tradition shows a strong preference for term limits on community leadership — in most religious orders, a superior serves for six years and can be re-elected only once — and explicit systems of “checks and balances” on the superior’s power. Also important, he said, is a “clear separation” between institutional leadership and spiritual direction.

Sexual abuse occurs in a situation where an imbalance of power between two people is exploited, Father Zollner said. It’s the antithesis of healthy spiritual guidance, which encourages freedom, including freedom from the guide.

“What is really needed is what Jesus does” in the Gospel of Luke after healing the “Gadarene Demoniac,” he said. Luke 8 says, “The man from whom the demons had come out begged to remain with him, but he sent him away, saying, ‘Return home and recount what God has done for you.’ The man went off and proclaimed throughout the whole town what Jesus had done for him.”

The news about Vanier was shocking, he said, although “not in the sense that I could not imagine that somebody, even if he is considered a holy man, has other sides” to his life and personality. “We need to come to grips with the reality that our expectations, our longing, our desire for holy models is so strong that we forget that all of us are human, weak beings.”

NEXT: Humanity, ethics must be at center of AI technology, pope says