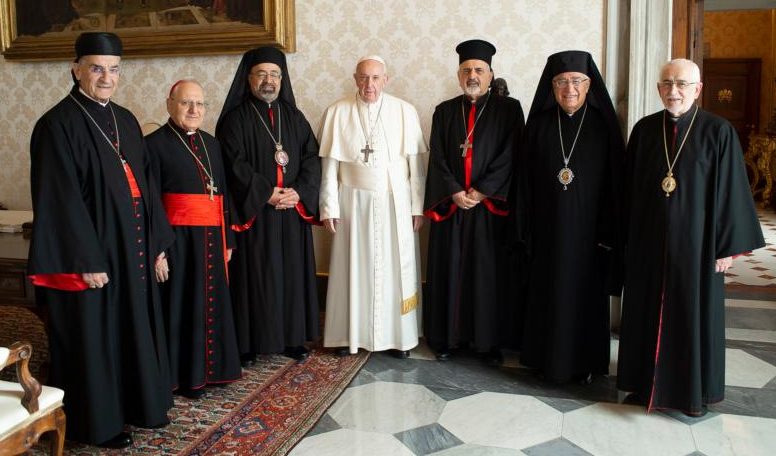 BEIRUT (CNS) — In a private meeting with Pope Francis, Catholic patriarchs of the Middle East had an opportunity to sound the alarm regarding the survival of Christians in the region as a result of persecution, extremism, economic insecurity and immigration to the West.

They provided Pope Francis with an overview of the general conditions of their countries and regions — Lebanon, Syria, Iraq and Egypt and the Holy Land — particularly wars and crises that have led to the emigration of Christians and the need to follow the faithful pastorally in their adopted Western countries.

They also presented the pope with a more detailed memorandum at the Feb. 8 meeting at the Vatican.

The Vatican did not comment on the meeting, but, in a statement, Cardinal Rai said he was “very happy” about the Holy Father’s awareness and concern regarding the churches’ affairs in the Middle East and the issues they face as well as “the importance of the presence of Christians, their role and mission” in coexisting with Muslims.

Cardinal Rai said the meeting “was an occasion to emphasize the importance of the word and stance” of the pope “to our Christian peoples and our region, which live a model of coexistence with Muslims to build our homelands and preserve their rich heritage” as well as to stress the role of the Holy See “and its diplomatic relations with the international family in order to put an end to the wars and conflicts that our Arab world suffers from.”

Syriac Patriarch Ignace Joseph III Younan noted that “in an atmosphere of frankness, respect, and appreciation,” Pope Francis reassured the patriarchs “that he was closely concerned with the situation in the Middle East, and he endeavored with all his strength to stop the powerful of this world from interfering in the affairs of the Middle East region.”

Patriarch Younan reported the pope also feels people have legitimate rights to have honest governments that respect citizens and seek the good of the homeland.

The patriarch added that Pope Francis said he would continue to defend Syria, “which is always in his heart and mind.” He said the pope reiterated his desire to visit Iraq but noted he cannot at this time.

Their meeting with the pope Feb. 8 was followed by a working meeting with Cardinal Pietro Parolin, Vatican secretary of state.

NEXT: Pope names critic of war on drugs to head Manila Archdiocese