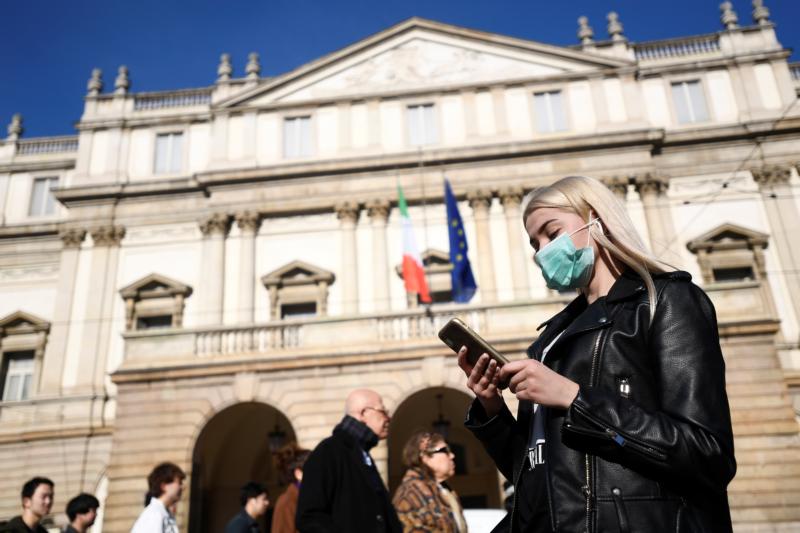 A woman wearing a face mask checks her phone outside the Teatro alla Scala opera house, closed by authorities due to a coronavirus outbreak in Milan Feb. 24, 2020. The Archdiocese of Milan issued a notice Feb. 23 suspending all public celebrations of Mass until further notice in compliance with Italian Ministry of Health precautions to prevent the further spread of the coronavirus. (CNS photo/Flavio Lo Scalzo, Reuters)

VATICAN CITY (CNS) — With the biggest two days of celebration and costume parades left, the famous pre-Lenten “Carnevale” of Venice was canceled as were Ash Wednesday services and even funeral Masses throughout the diocese.

The Archdiocese of Milan also issued a notice Feb. 23 suspending all public celebrations of the Mass until further notice in compliance with Italian Ministry of Health precautions to prevent the further spread of the coronavirus.

Angelo Borrelli, head of Italy’s civil protection service, announced Feb. 24 that the number of confirmed cases of coronavirus in the country had risen to 219, including five people who died. The majority of cases — 167 — were in the northern Italian region of Lombardy, whose capital is Milan. The Veneto region, whose capital is Venice, had 27 confirmed cases, he said.

Schools and museums in the two regions were closed, and school trips were suspended for all students throughout Italy.

Lazio, the region surrounding the Vatican, has had three confirmed cases, including a married couple from Wuhan, China, the epicenter of the outbreak. Neither Lazio nor the Vatican had issued special precautions as of Feb. 24.

Auxiliary Bishop Franco Agnesi, vicar general of the Milan archdiocese, issued further instructions Feb. 24 saying that churches would remain open for private prayer and, although there should be no public celebration of the Mass, “funerals and matrimonies can be celebrated, but with the presence only of close relatives.”

Milan’s famed cathedral announced it would be closed to tourists Feb. 24-25 while awaiting further instructions from the health ministry and the archdiocese. However, it said, “the area reserved for prayer” would remain open, although no public Mass would be celebrated.

In a statement Feb. 23, Archbishop Francesco Moraglia of Venice announced that all public Masses and gatherings of the faithful were being suspended at least until midnight March 1. The ban included Ash Wednesday services and funeral Masses, although a priest would still be available to bless the body of the deceased in the presence of the person’s closest family members.

The archdiocesan Lenten priests’ retreat, which was to begin Feb. 27, also was postponed.

Archbishop Moraglia said pastors should try to keep churches open so that a few faithful at a time could make a quick visit for prayer. Within the historic center of Venice that probably would not be possible, he said, and he announced that the city’s famed St. Mark’s Basilica would remain closed.

At the same time, he said, the archdiocese’s charitable activities would continue. Soup kitchens were to continue distributing free meals, but they would be packaged to go to avoid the risk of large numbers of people gathering in a dining hall. Public health officials will assist at dormitories for the homeless to ensure they remain open, he said.

The Basilica of St. Anthony of Padua, also in the Veneto region, announced the suspension of Masses and public prayer services through March 1. The Franciscans who care for the basilica, which includes the tomb of St. Anthony, said they would keep the church open, but they asked pilgrims and tourists not to congregate in large numbers.

The Archdiocese of Turin, in Italy’s Piedmont region, canceled all catechism classes and other public gatherings except for Masses. However, it ordered priests to empty all holy water fonts and distribute Communion only in the hand. As for the distribution of ashes Feb. 26, it said, “ashes will be placed directly on the head of the faithful without any physical contact and there will be no celebrations for children in order to safeguard their health.”

NEXT: Pope clears way for beatification of Salvadoran Jesuit, companions