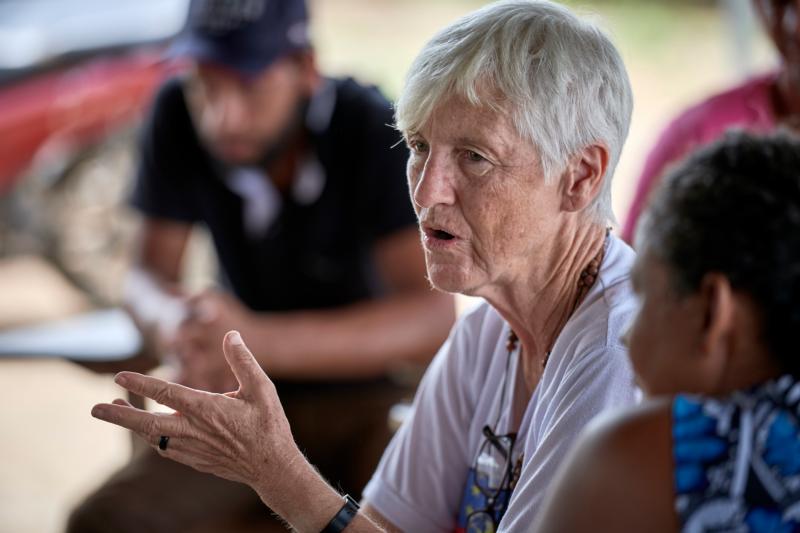 U.S. Sister Kathryn "Katy" Webster, a member of the Sisters of Notre Dame de Namur from the United States, talks with farmers in the countryside near Anapu, in Brazil's northern Para state. (CNS photo/Paul Jeffrey)

VATICAN CITY (CNS) — Pope Francis released his document on the Amazon region on the 15th anniversary of the assassination in Brazil of U.S. Notre Dame Sister Dorothy Stang, a missionary who defended the poor and the environment.

Her life and sacrifice are emblematic of what many participants at the October Synod of Bishops for the Amazon had said: Women in the region are leaders of both community and religious life; their defense of the poor and the natural environment is consistent and consistently results in threats to their lives.

In his postsynodal apostolic exhortation, “Querida Amazonia” (Beloved Amazonia), which was published Feb. 12, Pope Francis said consecrated men and women in the Amazon are “closest to those who are most impoverished and excluded.”

The pope devoted an entire section of the document to praising the way women — lay and religious — have kept the faith alive in the Amazon region. But he flatly rejects a request made by several synod participants to consider ordaining women deacons; the request did not receive enough support to be included in the synod’s final document.

At the end of the Synod of Bishops for the Amazon, and on numerous other occasions, Pope Francis has said Catholics still have not understood how and why women are important in the church.

“We have not yet realized what women mean in the church,” but instead “we focus on the functional aspect” — what offices they are permitted to hold — “which is important,” but is not everything, he said at the end of the synod in October.

Throughout his pontificate, Pope Francis has acknowledged the essential and irreplaceable contribution of women to the church, their equal dignity and the importance of having their voices and talents contribute to decision-making.

But the pope also understands that in the way the Catholic Church operates in most places today, the traditional Catholic tie between ordination and power has meant that sometimes women are consulted and sometimes they aren’t.

In his exhortation, Pope Francis tried again to lay out his vision for a church in which priesthood is equated with service, not power.

But clearly, until that vision becomes more of a reality, it will be up to priests and bishops to determine the extent to which the contributions and expertise of women — and laypeople, in general — will be welcomed.

Cardinal Michael Czerny, who served as secretary of the Synod of Bishops for the Amazon, said Pope Francis’ caution in the apostolic exhortation about thinking women will be valued only if they can be ordained must read within his “extensive magisterium” stressing “the need to separate power from the priestly ministry, since this combination is at the origin of clericalism.”

“This relationship between ministry and power is what leaves women without a voice, without rights and often without the possibility to decide,” the cardinal told Vatican Media. “So, it is not a question of giving them access to an ordained ministry in order to have them gain a voice and a vote, but of separating power from ministry.”

Pope Francis frequently has told people that ordination and the offices that go with it are not a measure of a person’s importance in the church; in fact, he often insists “Mary is more important than the apostles.”

In the exhortation, Pope Francis said, “In the Amazon region, there are communities that have long preserved and handed on the faith even though no priest has come their way, even for decades.”

That happened, he said, “because of the presence of strong and generous women who, undoubtedly called and prompted by the Holy Spirit, baptized, catechized, prayed and acted as missionaries. For centuries, women have kept the church alive in those places through their remarkable devotion and deep faith.”

Their example, the pope said, “summons us to broaden our vision” beyond seeing ordination as the best way to encourage and recognize women leaders in Catholic communities.

Still, while warning about the temptation “to clericalize” women or focus solely on functions, Pope Francis did say in the document that women “should have access to positions, including ecclesial services, that do not entail Holy Orders and that can better signify the role that is theirs.”

Those positions, he said, should be established in a stable manner, be publicly recognized and include a formal “commission from the bishop.”

While the positions should make it possible for women to have “a real and effective impact” on decision-making, he said, it should be done “in a way that reflects their womanhood.”

Pope Francis does not explain in the document what he means by that other than by saying, “Women make their contribution to the church in a way that is properly theirs, by making present the tender strength of Mary, the Mother.”

Reparatrix Sister Augusta de Oliveira, a Brazilian and vicar general of her order, was the only woman chosen by the Vatican to present the pope’s document to the press Feb. 12.

Throughout the Amazon and in Amazonian Catholic communities, she said, women are “conquering and occupying spaces for decision making, reflection and service in defense of threatened life.”

In the most difficult areas of the Amazon basin, she said, “we find the female presence” in religious communities “animating, supporting and serving.”

Pope Francis, in his document, urged Catholics to trust that the Holy Spirit is alive and active in the Catholic communities of the Amazon. “For wherever there is a particular need, he has already poured out the charisms that can meet it.”

The church, the pope wrote, simply must “be open to the Spirit’s boldness, to trust in, and concretely to permit, the growth of a specific ecclesial culture that is distinctively lay.”