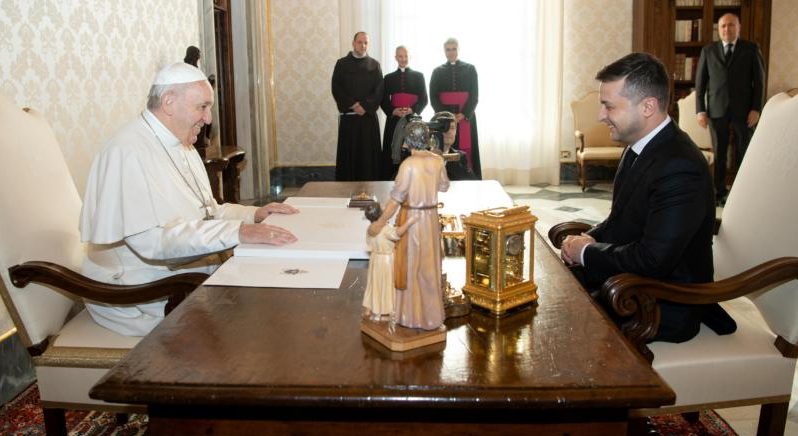 VATICAN CITY (CNS) — After meeting Pope Francis, Ukrainian President Volodymyr Zelenskiy tweeted that he was inspired by their discussions about peace.

The pope, he said in the Feb. 8 tweet, “does everything possible to bring peace and harmony to the whole world.”

Pope Francis and Zelenskiy spent about half an hour meeting privately before the Ukrainian president met with Cardinal Pietro Parolin, Vatican secretary of state.

Zelenskiy said he asked the pope’s help “to liberate the Ukrainians imprisoned in Donbass, Crimea and Russia.”

A Vatican statement about Zelenskiy’s visit did not mention what the pope and president spoke about; however, journalists present in the room said Pope Francis gave him a medal of St. Martin of Tours, telling him the saint “helped people who were needy and in difficulty.”

The pope added that “in a difficult situation like war, I hope St. Martin will protect your people,” the journalists reported.

With Cardinal Parolin, the Vatican statement said, the conversation was “dedicated principally to the humanitarian situation and the search for peace in the context of the conflict which, since 2014, is still afflicting the country. In that regard, there was a shared hope that all the parties involved would show maximum sensitivity to the needs of the population, who are the first victims of violence” and that they would commit to continued dialogue.