Students show they know their faith at religion bee

Students, family, teachers and spectators gathered for the championship round of the inaugural Philadelphia Archdiocesan Elementary School Religion Bee on March 2 at the Archdiocesan Pastoral Center in Philadelphia.

The religion bee was open to Catholic school students in grades five through eight and sponsored by Archdiocese of Philadelphia Schools (AOPS) and the archdiocesan Missionary Childhood Association (MCA).

The road to the championship round stretched back weeks. Forty-four participating schools in the archdiocese held their own religion bee. A study packet was available to all students who wished to utilize it. The winner from each school bee advanced to a preliminary bee at either at Archbishop Ryan High School in Northeast Philadelphia on Feb. 10 or Cardinal O’Hara High School in Springfield on Feb. 12. 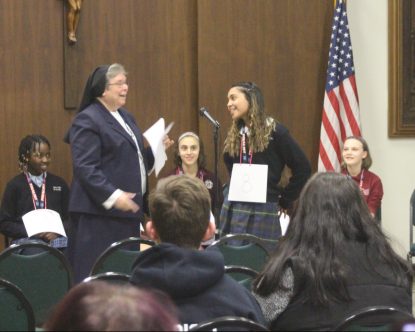 The final four from these two bees advanced to the championship round, for eight total contestants competing on March 2 at the Archdiocesan Pastoral Center.

Families, teachers and students came out to support their contestants, including the entire eighth grade class from St. Cornelius School. Those unable to attend could watch the archdiocesan religion bee via live stream video on the AOPS Facebook page.

St. Anastasia School counted itself among over 1,300 live stream views. The entire student body rallied behind schoolmate Theresa Stolarczyk from their classrooms in Newtown Square.

Auxiliary Bishop Michael Fitzgerald, who oversees Catholic education for the archdiocese, led the opening prayer. He thanked the participants and all who studied for their hard work, adding that the bee was an opportunity for students to “learn more about our great Catholic faith and the great variety of cultures and ministries and many things we have in our Catholic Church.”

The topics for the religion bee certainly showcased this variety, ranging from information about the sacraments to the saints to church history, to name a few.

A lively Sister Margaret Rose Adams, I.H.M., the assistant superintendent of elementary schools, proceeded over the archdiocesan religion bee. She said she has wanted to have a religion bee for 10 years, and finally she saw this dream become a reality.

Catholic schools are firstly about religion, she said, and with geography bees, spelling bees and science fairs, it makes sense to have a religion bee too. In her opening remarks, she made sure to thank the Diocese of Harrisburg and Diocese of Brooklyn. The two dioceses have their own religion bees, and offered great assistance in helping the Archdiocese of Philadelphia create questions for its religion bee.

The Philadelphia Archdiocesan Elementary School Religion Bee generated lots of excitement, according to Sister Margaret Rose, who noted that some students who didn’t excel in other academic areas excelled in religion. She also noted the diversity of students who competed, including some who are not Catholic and some who learned English just two years ago. 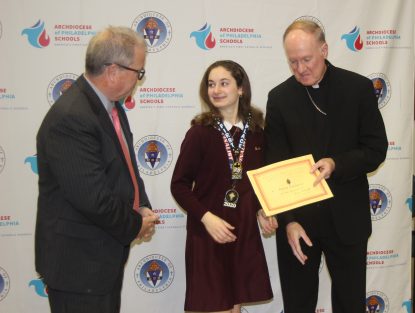 At the start of the competition, Sister Margaret Rose explained the religion bee rules. Contestants had 15 seconds to answer each question. Three judges and a time keeper monitored the competition.

The initial 10 rounds sped by with seven of the eight contestants still standing. Moderator Alixandra Holden of the Missionary Childhood Association joked that the group might be there for a long time. The remaining rounds increased in difficulty until just four contestants remained.

She was joined by her mother Karen, religion teacher Joanna Fabii and St. Anastasia principal Beth Doyle. The religion bee champion said she went over the study packet with her mom and then studied questions she didn’t know using Quizlet.

Fabii, Theresa’s religion teacher, did not take credit for her student’s win but said Stolarczyk’s success really came from her home, and that each teacher had a little piece in her formation. Theresa’s mother was quick to add, “it takes a village.”

A village certainly welcomed Theresa as she returned to St. Anastasia School. Congratulatory signs, handmade by the eighth grade class, decorated the school’s windows with messages like “Congratulations Theresa!” and “Good Work!”

Theresa is also a Neumann Scholar. The competitive four-year-tuition scholarship comes from the Connelly Foundation. She can now add “archdiocesan religion bee champion” to her impressive and growing resume. 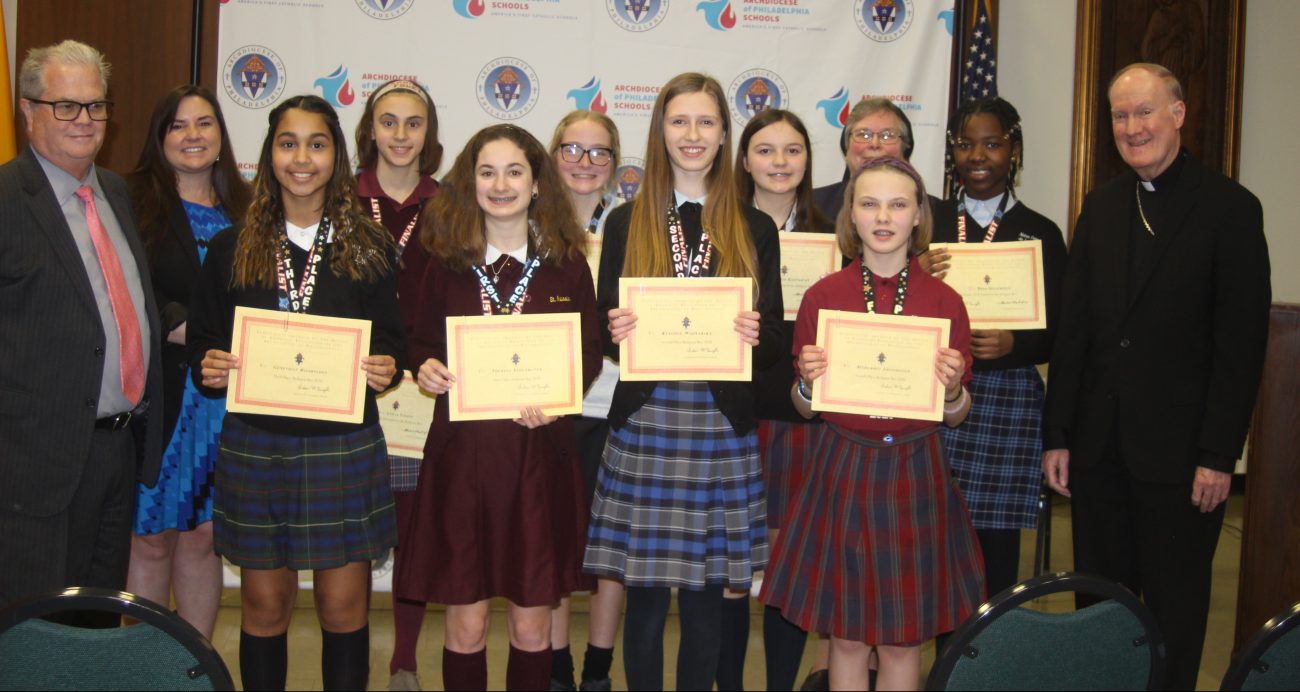 PREVIOUS: Conspiracy theories, truth and the power of a story

NEXT: A good trade: Welding is solid fit for Father Judge students