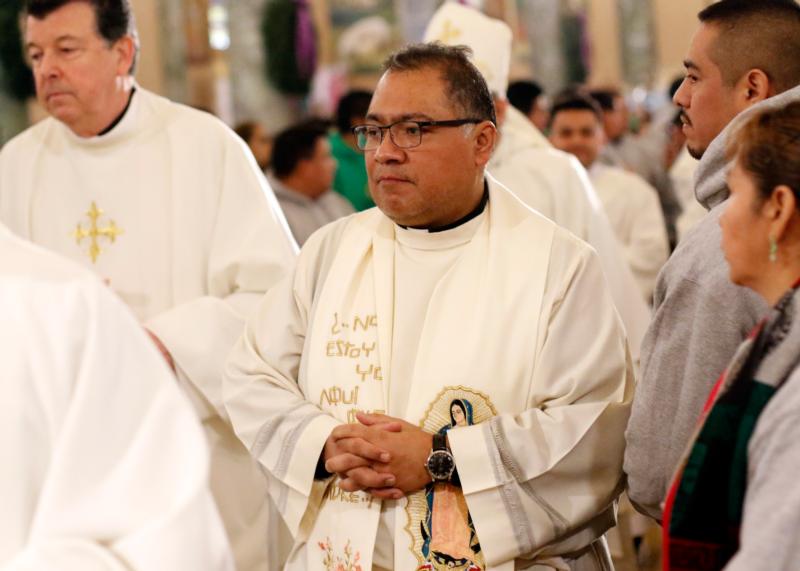 Father Jorge Ortiz-Garay, coordinator of ministry to Mexican immigrants in the Diocese of Brooklyn, N.Y., is seen processing at the beginning of Mass marking the feast of Our Lady of Guadalupe Dec. 12, 2018, at the Co-Cathedral of St. Joseph in Brooklyn. He died March 27, 2020, from complications related to the coronavirus. (CNS photo/Gregory A. Shemitz)

He was pastor of St. Brigid’s Church in the Wyckoff Heights area of the New York borough of Brooklyn and he also was diocesan coordinator of the ministry to Mexican immigrants.

He died at Wyckoff Hospital Medical Center in Brooklyn from complications related to the coronavirus and is believed to be the first Catholic priest in the United States to die as a result of COVID-19.

“This is a sad day and a tremendous loss for the Diocese of Brooklyn. Father Jorge was a great priest, beloved by the Mexican people and a tireless worker for all of the faithful in Brooklyn and Queens,” said Bishop DiMarzio, who issued a video statement in English and Spanish.

He said Father Jorge, as he was called, had “underlying complications” which made him more vulnerable to the coronavirus.

The bishop called the late priest “a great missionary among us,” especially in establishing the diocese’s Mexican apostolate.

Bishop DiMarzio noted that it was Father Jorge who coordinated “the magnificent Our Lady of Guadalupe feast day traditions” in the Diocese of Brooklyn, which include a Mass attended by thousands of pilgrims followed by a torch-lit pilgrimage through the streets of Brooklyn and Queens, the two New York boroughs that make up the diocese.

He recalled the crowd of 3,000 that gathered for the feast last Dec. 12 at Brooklyn’s Co-Cathedral of St. Joseph and in his video message made a special plea to those who attended to think about a vocation , as “someone must replace Father Jorge. We need vocations to care for Hispanic community, we need vocations from the Spanish speaking.”

If you feel God is calling you, please pray and when the coronavirus epidemic is over please go to see one of your priests” about a possible vocation, Bishop DiMarzio added.

Father Jorge was born Oct. 16, 1970, in Mexico City. He was ordained to the priesthood in the Archdiocese of Newark, New Jersey, as a member of the Neocatechumenal Way May 29, 2004.

He came to the Brooklyn Diocese in 2009 and first ministered at the Co-Cathedral of St. Joseph, in Prospect Heights, while also serving as the Chaplain for “missio ad gentes” in Brooklyn. In 2014, he began serving as administrator at St. Brigid’s Church and on July 13, 2019, was installed as the Pastor July 13, 2019.

On Dec. 10, 2019, he was incardinated into the diocese, officially becoming a priest of the Diocese of Brooklyn. He also became a naturalized citizen recently.

A memorial Mass for father Jorge will be celebrated at a later date. He is survived by his parents, Jorge and Estella Ortiz, and siblings, and nieces and nephews.

“God bless all of you in this difficult time,” Bishop DiMarzio said in his message. “We mourn the passing of our own father Jorge, pray for the intercession of Our Lady of Guadalupe for him and his family and for all that we may surpass and conquer this terrible virus.”

NEXT: Sisters’ work during 1918 flu seen as model for crisis today