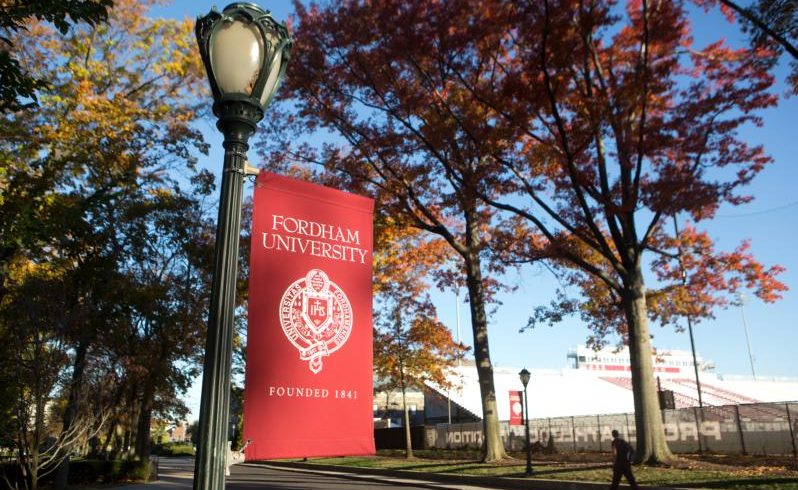 Amid coronavirus concerns, Fordham University in New York announced March 9, 2020, that it was suspending public classes on all of its New York-area campuses and would continue these courses online March 11. (CNS photo/Michael Falco, Fordham University)

WASHINGTON (CNS) — By March 10, a handful of Catholic universities joined more than 40 U.S. colleges and universities that canceled in-person classes because of the coronavirus threat.

Fordham University in New York announced March 9 that it was suspending public classes on all of its New York-area campuses and would continue these courses online starting March 11.

“All residential students are encouraged to return home immediately,” said a letter to the university community by Jesuit Father Joseph McShane, the university’s president. The online classes will continue until further notice.

As of the morning of March 9, the campus did not have any confirmed cases of COVID-19, the disease caused by the coronavirus. The school announcement said the decision to switch to online and electronic instruction was meant to “reduce potential pathways for community spread of COVID-19 on campus.”

The announcement also said the university’s actions were consistent with the governor’s declaration of a state of emergency in New York March 7. As of March 9, New York state was reporting 142 confirmed COVID-19 cases and 19 of those are in New York City.

During the weekend of March 7-8, campus officials learned that an undergraduate commuter student exhibited symptoms consistent with the coronavirus. The student has been tested for the virus and is self-isolating at home. If the student tests positive, Fordham officials and its health office will attempt to reach everyone with whom the student has had contact.

The university also reported March 6 that a parent of a prospective student fell ill in the campus library but tested negative for the coronavirus. It also had previously reported two faculty members and three students may have been exposed to the virus off campus. This group has been self-isolating at home for 14 days.

The university’s spring break will continue as scheduled March 14-22. Students are advised to take what they need from their rooms before leaving campus so they can continue their coursework online.

Students who are not able to return home will be allowed to remain in their residence halls, as planned, and one dining facility will remain open on each campus.

All university events are canceled at least through March 29.

“These measures are in force until further notice. We will restore campus operations to normal as soon as we, in consultation with local health authorities, believe it is wise to do so. We will be communicating as far in advance” about events like graduation, the announcement added.

Similarly, Seattle University, another Jesuit-run school, announced March 6 that it would no longer have public classes for the rest of the winter quarter, ending March 20.

The university was switching to online classes “to support efforts by public health agencies to slow the spread of COVID-19 in the region,” and planned to keep the campus open.

In a March 6 letter to the campus community, Jesuit Father Stephen Sundborg, said the university has been “addressing unprecedented challenges and rapidly changing circumstances in the past few weeks” with the spread of the coronavirus globally and locally.

“We have worked to act according to guidance from public health agencies and the most up-to-date information as the situation unfolds while recognizing the concerns and anxiety across our community. We have endeavored to operate in a manner that prioritizes the health and safety of our students, faculty and staff while allowing our students full opportunity to continue to engage in their academic studies,” his letter said.

Other Catholic universities to switch public classes to an online format as of March 10 included St. John’s University in Queens, New York, which said all students, if they are able, should return home until March 27; Sacred Heart University in Fairfield, Connecticut, where classes will be online March 11-29; and Santa Clara University in California, where classes would be in virtual format March 10-April 13. Students were advised to move home, if possible, during that time period.

None of these campuses had specific cases of the virus on campus but announced they were taking these steps as a precautionary measure.

Other public and private universities in Washington and the New York area have similarly announced that they were switching to online courses at least for the near future, including the University of Washington in Seattle, which announced March 6 it would be offering classes online for two weeks.

The law school at Jesuit-run University of San Francisco also will be conducting its courses remotely beginning March 11.

An announcement about the university’s evolving response to the coronavirus stressed that “these are challenging times” and thanked students and faculty for their flexibility and goodwill during this “unprecedented public health challenge.”

On March 5, the U.S. Department of Education released guidelines for colleges to quickly transition to online class formats. The Centers for Disease Control and Prevention has advised U.S. colleges and universities without any connection to the coronavirus on their campuses to take steps now, including updating emergency operations plans, promoting basic hygiene and stepping up cleaning and disinfection protocols.