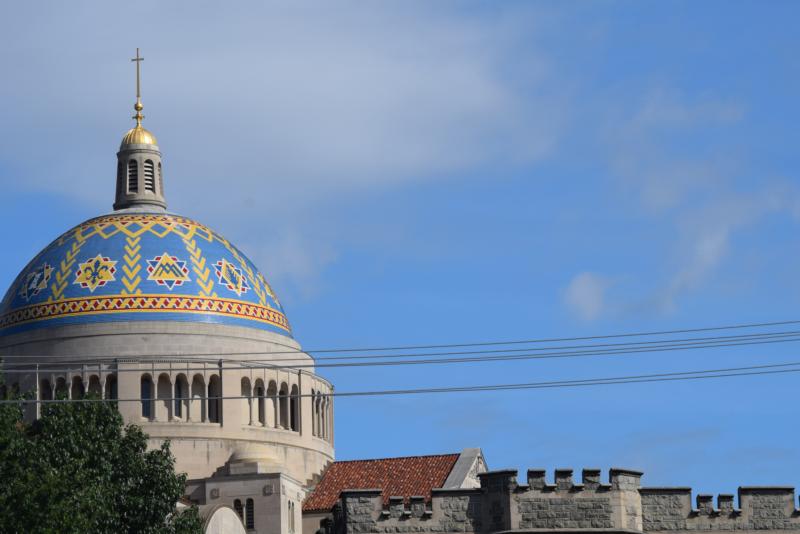 The Basilica of the National Shrine of the Immaculate Conception sits nestled next to The Catholic University of America campus in Washington July 18, 2019. The shrine announced March 17, 2020, it has closed its doors to the public in response to the Centers for Disease Control and District of Columbia guidelines "and to support the efforts of authorities to minimize the spread of COVID-19," the disease caused by the coronavirus. (CNS photo/Elizabeth Bachmann)

WASHINGTON (CNS) — The Basilica of the National Shrine of the Immaculate Conception in Washington announced March 17 it has closed its doors to the public in response to the Centers for Disease Control and District of Columbia’s guidelines “and to support the efforts of authorities to minimize the spread of COVID-19,” the disease caused by the coronavirus.

“This was a difficult decision because we know that the faithful rely on Mary’s Shrine for the peace and solace that is found in this sacred place. Still, we also recognize that we must listen to scientific and medical experts and do our part to help prevent the spread of this virus,” Msgr. Walter R. Rossi, rector of the national shrine, said in a statement announcing the closure.

The statement from the shrine — the largest Catholic church in North America and one of the largest churches in the world — noted the closure is believed to be the first time in the nearly 100 years since its founding that it has closed for a nonweather-related event.

“The decision to close the doors to Mary’s Shrine was made not out of fear, but out of concern, trusting that Our Lord and his Blessed Mother will use this action to protect shrine staff and visitors,” Msgr. Rossi said in his statement. “We encourage everyone to heed the advice of church and government authorities while placing our trust and hope in God.”

The national shrine will continue to celebrate its Sunday noon Mass and livestream it at www.nationalshrine.org/mass.

“We are committed to continuing the livestream for as long as possible while ensuring that the dedicated staff and volunteers here at Mary’s Shrine are kept safe,” Msgr. Rossi said. He did not indicate when the national shrine would reopen to the public, but said, “We look forward to the day when we can reopen our doors and resume our ministry, most especially the celebration of Mass and Reconciliation.”

At another venerable church in the nation’s capital, the Franciscan Monastery of the Holy Land, the doors also are closed to public Masses, like most U.S. churches during this pandemic. Even without a congregation, Mass was celebrated for St. Patrick’s Day by Father Jim Gardiner, a Franciscan Friar of the Atonement. The 11 a.m. Mass was broadcast live on vimeo.com.