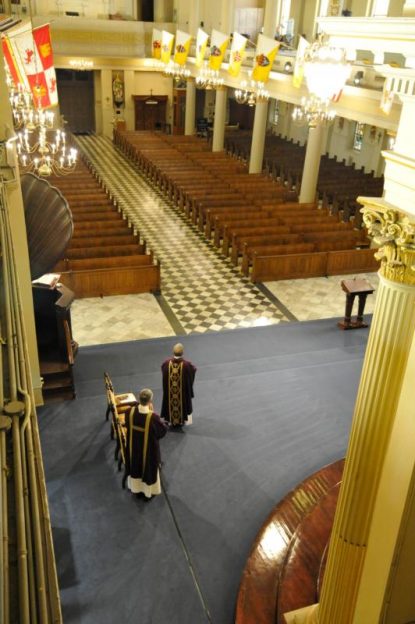 Inside the historic New Orleans cathedral, on the same spot where Mass has been celebrated since 1718, the Eucharist was being celebrated again, but this time without a single person sitting inside the 950-seat narthex.

It was called a “private” Mass — a liturgy celebrated with the day’s readings and the offering of the Eucharist — and it also marked the first time since Hurricane Katrina in 2005 that the cathedral had not hosted a public Mass, instead relying exclusively on a television station and a livestreaming service to proclaim the good news to people at home or work.

Because of precautions taken by the Archdiocese of New Orleans to slow the spread of the coronavirus, Archbishop Gregory M. Aymond announced March 16 that all public Masses in the archdiocese would be canceled indefinitely.

Not a single congregant was inside the cathedral as Deacon Brady proclaimed the Gospel from the 18th chapter of St. Matthew, in which Jesus teaches his disciples to forgive “not seven times but 77 times.”

As he spoke from the elevated pulpit to rows of empty pews, Deacon Brady looked left and right, as though he were making eye contact with the congregation.

“I was trying to act as if there was a congregation there, so I looked around,” he told the Clarion Herald, New Orleans’ archdiocesan newspaper.

With no public Masses being offered in the archdiocese for at least the next several weeks, Father Landry said the cathedral’s TV ministry would continue to grow in importance. The daily 12:05 p.m. Masses, Monday through Friday, and the 11 a.m. Sunday Mass will be aired live on WLAE-TV and livestreamed on TheDailyMass.org.

Both Father Landry and Deacon Brady have heard firsthand how important the TV Masses have been to people over many years.

“It’s extremely important, especially when you begin to hear the responses from people who say, ‘Oh, I saw you on the Mass when I was in the hospital and it gave me strength,'” Deacon Brady said.

“I’ve been at the hospital in an elevator and people will ask me, ‘Aren’t you the priest from TV?'” Father Landry said. “They watch the Mass and the remember it, too. We get numerous calls at the cathedral about the Mass.”

Father Landry said with coronavirus precautions ramped up, the cathedral has tried to increase awareness of the Mass through its bulletin and social media platforms. One possibility being discussed is to have priests from other parishes take turns celebrating the TV Masses at the cathedral on weekdays.

“Since they don’t have Masses in their own parishes, at least this would be a chance for them to come and celebrate if they choose,” Father Landry said.

Deacon Brady said he realizes history is happening right before his eyes.

“It reminds me of all the papers we’ve seen at the Old Ursuline Convent about the yellow fever epidemics (of the 19th century) and all the stories about the loss of life — children losing both of their parents,” Deacon Brady said. “Other generations have gone through this.”

Father Landry said the virus scare has affected the cathedral’s crowded wedding schedule. Every engaged couple who planned a wedding for March and April at the cathedral has called to reschedule its wedding for later this year, he said.

At the end of Mass, Deacon Brady and Father Landry offered a special prayer for victims of the virus.

“Today, as we struggle with these issues of the coronavirus, the worries that lay heavily on our hearts, might we know that God’s grace, his mercy and his love always surround us,” Deacon Brady said. “May he give us that peace that we need.” 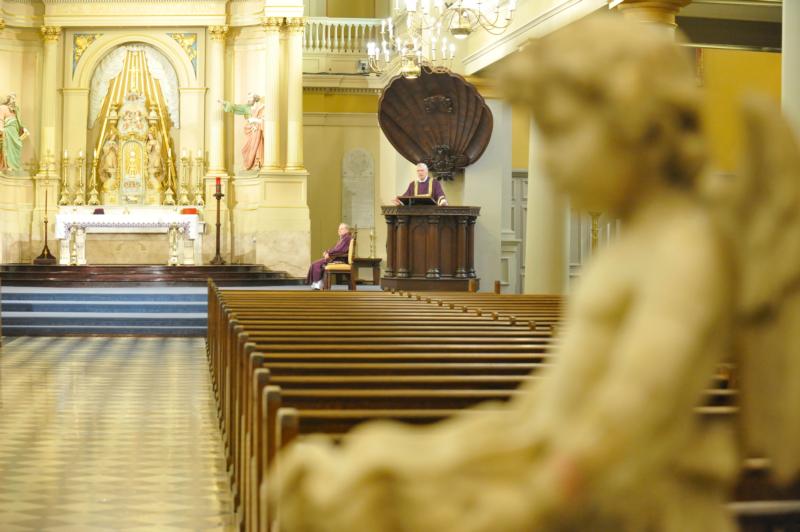