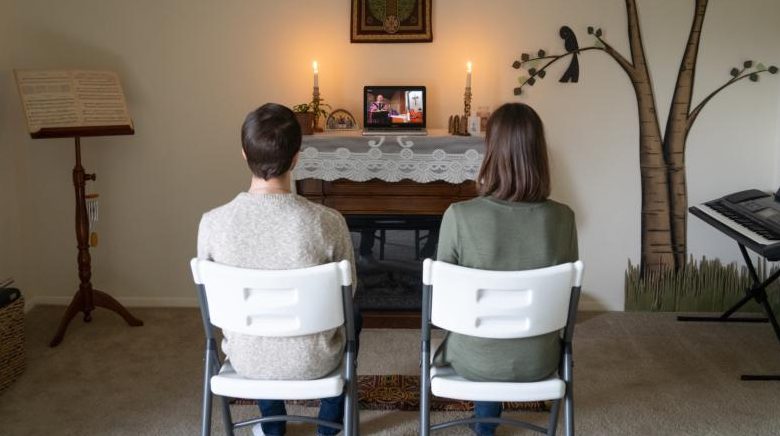 Brian and Katie Rutter watch a Mass that their pastor, Father Tom Kovatch, livestreamed from St. Charles Borromeo Catholic Church in Bloomington, Ind., March 28, 2020. Catholics have employed the internet to connect with their faith and communities during shutdowns caused by the rapid spread of the coronavirus. (CNS photo/Katie Rutter)

LOUISVILLE, Ky. (CNS) — As Catholics dutifully sit at home, doing their part to protect vulnerable people from COVID-19, the Holy Spirit has been busy inspiring creative ways to minister in the Archdiocese of Louisville and around the world.

Pastors are offering drive-through adoration and confession as well as livestreaming and on-demand liturgies online. Some parishes are ringing their church bells at 10 a.m. daily at Kentucky Gov. Andy Beshear’s invitation. The bell ringing is meant to be a reminder that people are not alone.

Parishioners are taking part in phone trees, calling to check on vulnerable members of the parish. Others are donating grocery store gift cards to help families in need.

It’s a time of sacrifice as well.

The consequences of social distancing have led to canceled public liturgies and prayer services throughout Lent, and upcoming Palm Sunday, Holy Week and Easter observances, leaving priests to pray these liturgies in solitude, or with just one or two attendants.

Catholics are participating as best they can from home through online livestreams in many dioceses around the world, including the U.S.

Clergy suggested there are at least two important things that Catholics can to do spiritually during their confinement, in addition to regular prayer:

— First, engage in spiritual Communion, a simple prayer expressing one’s ardent desire to be in communion with Christ.

— Second, make a perfect act of contrition. This act involves an examination of conscience, as well as a desire for forgiveness and the intention to make a confession when it’s safe to do so.

To help the faithful meet their spiritual needs during the church’s holiest week of the year, dioceses around the world are planning to livestream Palm Sunday Masses, chrism Masses, Holy Thursday liturgies, Good Friday’s celebration of the Passion, and Easter Vigil and Easter Masses.

Among those broadcasting the traditional church services are the dioceses of Trenton, New Jersey, Albany and Rochester, New York, and Corpus Christi, Texas. Catholics can check their diocesan website to learn of plans for livestreaming of liturgies in their locales.

Many other dioceses and parishes already are livestreaming Sunday Mass and while they may not have announced specific plans for Palm Sunday and Easter, diocesan and parish websites may contain new details.

(See a complete list of livestreamed daily and Sunday Masses and other devotions in parishes, shrines and schools of the Archdiocese of Philadelphia here.)

In the Archdiocese of Indianapolis, Father Tom Kovatch at St. Charles Borromeo Catholic Church in Bloomington, Indiana, has been livestreaming his celebration of Mass on Facebook from the church. Father Kovatch learned to livestream after all Catholic churches in the archdiocese were closed to stop the spread of the coronavirus, like the rest of the country’s churches.

In Hendersonville, Tennessee, in the Diocese of Nashville, Father Andrew Forsythe has been setting up his portable altar and cameras to record a private Mass he celebrates in the parking lot of Pope John Paul II High School. The students are confined to their homes because of the COVID-19 pandemic.

“Mass is the highest form of prayer,” said Father Forsythe, who is the chaplain and a theology teacher at the Catholic high school. “It’s our lifeline. It’s where community comes from.”

Bishop John O. Barres of Rockville Centre, New York, which has been rocked with a high number of COVID-19 cases, offered a pastoral letter for parishioners for reflection during the final weeks of Lent.

Titled “The Great Week: A Pilgrimage With the Lord in Holy Week,” the letter takes readers through the traditional observance throughout the days marking Jesus’ entry into Jerusalem on Palm Sunday to his resurrection at Easter.

While the pastoral letter was prepared in advance of the rapid advance of illness caused by the new coronavirus, it asks the faithful to reflect on how Lent can be a spiritual grace that carries them through the year.

Some parishes across the Louisville Archdiocese continue to offer the sacrament of reconciliation with either a carefully planned drive-through (that assures safe distance and confidentiality) or an interior room that is disinfected, large enough to keep a safe, six-foot distance between people and soundproof.

In general, though, Karen Shadle, director of the archdiocesan Office of Worship, suggested delaying the sacraments.

“We’re trying to get people to stay home as much as possible. That is the spirit governing everything. It’s about safety,” Shadle said.

“Unless you are in an emergency near-death situation, the sacraments should be delayed,” she said. In situations where someone is near death, families should call their pastor.

Father William Bowling, pastor of Holy Trinity and Holy Name parishes in Louisville, told The Record, the archdiocesan newspaper, that he is exploring ways to serve people who are dying and desire anointing.

He also has been leading prayer online — on Facebook live — several times a day. He said he is “bursting with pride” at the way Holy Trinity School and the parishes have handled the crisis.

He encouraged people to “look for the grace.”

“People can find in this an extraordinary opportunity for spiritual growth,” he said. “This is an opportunity for prayer, in communion with God, and to care for one another. I believe the church can emerge from this strengthened and purified.”

Deacon Dennis Nash, director of the Diaconate Office and a deacon at St. Raphael Church, also in Louisville, said ministries and parishes are in triage mode.

“So much of our ministry is face to face, so we’re having to reinvent the wheel,” he explained. “We have to assess the priorities and the need.”

Deacons of the archdiocese have an extensive prison ministry and, since prisons aren’t allowing visitors, the deacons have only been able to let them know, “They are in our prayers and we ask them to pray for all of us,” Deacon Nash said.

Hospitals, he said, have placed restrictions on ministers, though ministers have still been able to see Catholic patients in an emergency situation, after a health screening.

Father Charles D. Walker livestreams Mass at St. Bernard Church in Louisville and keeps a school yearbook and parish directory on the altar.

During a recent broadcast, he told viewers he keeps the books on the altar “just to remind me you’re with me in prayer, I’m with you in prayer. Every day I have been praying for you and I want you to know that.”

Within hours of school closing announcements made March 19, he said, parishioners had collected $500 in grocery gift cards for school families that have few resources. Within a few days, that fund had exceeded $2,000. Gift cards are being shared with families and elderly parishioners in need. Other volunteers are part of a phone tree, calling elderly and vulnerable parishioners, as well as delivering groceries and medicine to them.

“The creativity and especially the generosity of folks trying to be church and be helpful and loving — to me that’s an exciting and very holy, beautiful thing.”

Louisville-area nursing homes also are trying to find ways to keep residents engaged, since they can’t gather or have visitors. The Little Sisters of the Poor have held “hallway bingo and hallway rosary” for residents who stay in the doorways of their rooms. They also regularly have a dog who visits residents.