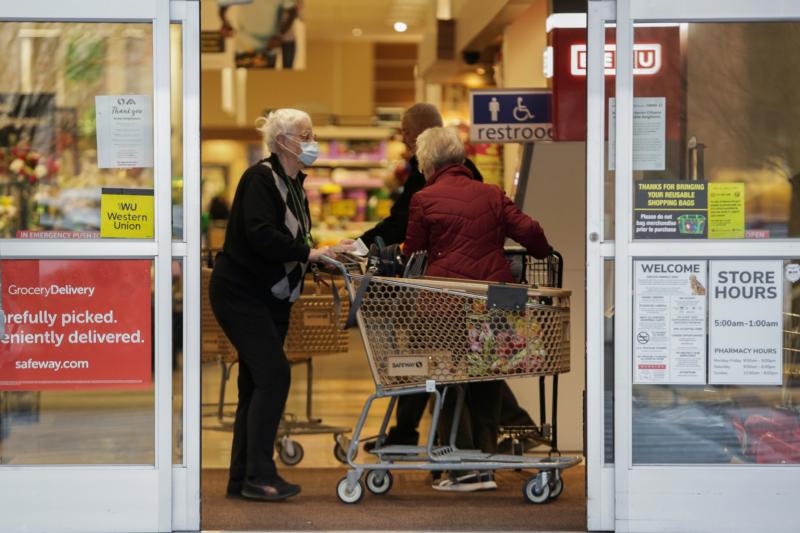 Seniors are shown shopping at a Seattle Safeway grocery store March 19, 2020, where customers have been asked to reserve the hours 7 to 9 a.m. on Tuesdays and Thursdays for seniors, pregnant women and people with compromised immune systems, during the coronavirus pandemic. (CNS photo/Jason Redmond, Reuters)

PORTLAND, Ore. (CNS) — In what he called “by far one of the most difficult communications I have ever written,” Portland Archbishop Alexander K. Sample announced March 16 that all Masses in the Archdiocese of Portland — including those for Holy Week and Easter — are canceled through April 14.

The governor’s decision was the latest set of drastic actions intended to curb the spread of the coronavirus. That same day, President Donald Trump made a similar recommendation that gatherings not exceed 10 people.

“I suspect that at some point, 10 people will become the law,” wrote Archbishop Sample in the letter. He said it would be impossible to manage the 10-to 25-person limit in Masses in the parishes and missions of western Oregon.

It was a choice made “with a very heavy heart,” he said.

As of March 19, 75 people in Oregon had tested positive for COVID-19, the disease caused by the coronavirus, and three people in the state have died.

With Archbishop Sample’s announcement, he dispensed all the faithful from the obligation to attend Mass on Sundays and holy days of obligation through April 14.

“This will be particularly hard because this will take us through Holy Week and Easter,” said the archbishop, noting that additional information, direction, suggestions and pastoral guidance will be forthcoming “as we navigate together these uncharted waters.”

Archbishop Sample said he would be reminding priests of the importance of offering daily Mass, though not publicly, for the good of the faithful and for an end to the crisis.

“I am sorry beyond words to have to make this decision,” he wrote. “It is very painful for me to do so. In the midst of this, we must remember that the holy Eucharist remains the source and summit of the Christian life. May our hunger for the Mass and the Body of Christ be a source of grace for us.”

Prior to the governor’s new orders, the archbishop had said March 12 that Masses would continue in western Oregon. He offered directives to keep the faithful safe, encouraging those 60 and older and those who are frail to stay home from Mass, since they are the most vulnerable.

This is a staff report from the Catholic Sentinel, newspaper of the Archdiocese of Portland.

NEXT: No Mass, no offertory: Church collections take a hit