What is the ‘Catholic vote’ in more diverse church? 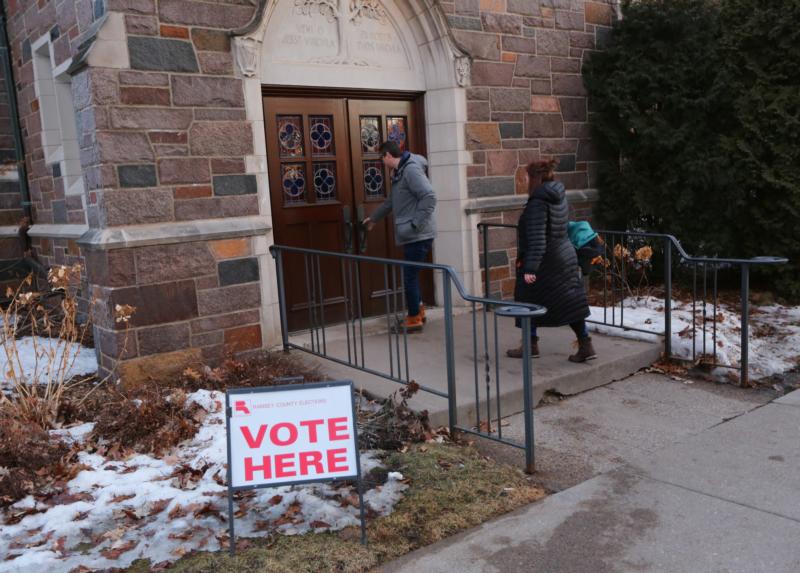 WASHINGTON (CNS) — In the last presidential election, some political pundits referred to the “Catholic vote,” one that predicted Donald Trump’s rise to the presidency, and one that aligned in 2016 with the voting constituency that landed him the White House: overwhelmingly white and politically conservative voters.

But what the vote also revealed was a demographic shift taking place among Catholic voters, one that depends more on the ethnic background of the person casting the vote than on a religious affiliation.

“When we don’t talk about the white Catholic vote vs. the Hispanic Catholic vote, we’re really missing a lot,” said Elizabeth Podrebarac Sciupac, senior researcher at the Pew Research Center and one of the panelists of “Faith and the Faithful in the 2020 Presidential Primaries” roundtable hosted March 4 by the Initiative on Catholic Social Thought and Public Life at Georgetown University.

“We know the entire U.S. is becoming far more politically polarized than ever before and religious groups are not immune to that,” she said.

Though 52% of Catholic voters cast ballots for Trump in the 2016 presidential election, the majority of Latino Catholics — which at 38% of the U.S. Catholic population is the second largest ethnic group in the church — overwhelmingly voted for Democratic candidate Hillary Clinton.

And in the recent Democratic primaries, Latinos carried progressive Bernie Sanders to victory on Super Tuesday in the delegate-rich state of California.

“I think that the really important Catholic vote in this primary election was the Hispanic Catholics,” said Jesuit Father Thomas Reese, who also spoke on the panel that examined the way religious values and voters are shaping the race for the White House in 2020.

The way a voter views and practices his or her faith, which in many ways is painted with the brush of their socioeconomic experience as well as ethnicity, seems to have a lot to do with how the person approaches the ballot box.

For political operative Donna Brazile, a former interim national chair of the Democratic National Committee, her beliefs have largely been shaped by her experience as a black Catholic from Louisiana. The third of nine children, she said she benefited from government programs as a child such as Head Start that helped not just with education but nutrition and health care — programs that have suffered amid political bickering, which has left a generation of children behind, she said.

Yet others voted for Republicans and in particular for Trump because they felt that they and their religious institutions were under attack by Democrats who did little to reach out to them, said panelist Timothy Carney, an editor at the Washington Examiner and author of “Alienated America: Why Some Places Thrive While Others Collapse.”

“The white evangelical looks around and says, ‘I’m a religious minority now.’ That’s the main thing that’s going on now,” Carney said, explaining that people who never would have defended the behavior of Trump in the past felt that “he’s what’s between me and the state that’s going to come after our institutions” and decided to support him.

They wanted a president to defend their beliefs against abortion, and Trump, along with Vice President Mike Pence, were ready to do that, Carney said, even if there were character issues.

“People who certainly are ashamed of a president who appeared in Playboy, poses with a Playboy cover behind him, brags about sexually assaulting women … they just say, ‘He’s the guy who gives us these results.'”

Panelist Eugene Scott, political reporter for The Washington Post, pointed out that there had been a lack of outreach to religious voters, particularly conservative Christians, by the Clinton campaign in the last election and any potential Democratic candidates should pay attention to those lessons from the past.

Most recently, Brazile said, “the Protestant black community put the Catholic in the driver’s seat. That’s where we are.” But she admitted that “while my faith has driven me and my politics … my party often doesn’t lead with faith, but with values,” and includes voters of other religions as well as of no religious beliefs.

Democratic presidential candidates Joe Biden and Elizabeth Warren agreed that there were a few conservative Christians out there who backed Trump in the last election, but “would be open to voting for them if that person (the candidate) was aware of them and was reaching out,” Scott said.

But some panelists called out the Democrats, saying that when it comes to the abortion issue, the party has not been welcoming to pro-life Democrats, and has gotten tangled up in responses for fear of how other Democratic constituencies might respond, as well as how others would react when you mention the word “Catholic.”

“I think anyone who mentions ‘Catholic’ is going to tick off some of the main constituencies in the main party,” said Father Reese.

And yet, the Pew center’s Podrebarac Sciupac said more than half of voters in a survey said that it was “very important or somewhat important” to have a president share their religious beliefs. In the Democratic camp, Biden is perceived as someone who is “very or somewhat religious,” while the rest of the Democrats weren’t perceived similarly.

But Father Reese pointed out that while Latino Catholics may have said they favored someone religious, they voted for Sanders, who, even though he has referred to how Judaism shaped his view, is not perceived to be religious.

“Don’t believe what voters tell you,” he said.

“The biggest story related to faith and politics in the context of identity that has come about in this election is people reflecting on what their faith means to them and what values shape their politics and their view of policy,” said Scott.

Father Reese said he feared that elections, of late, are run more on fear than love. Carney said religious voters in the last election and this election are looking for something to belong to, something that perhaps in the past was satiated by belonging to a church.

“The quintessential Trump (voter) in the early primaries was the white evangelical who does not go to church,” he said. “You can say that’s because they’re fake Christians. No. It’s because they’re disconnected. The people, what they’re seeking with Sanders, what they’re seeking with Trump, is what they would be getting if they were going to church. I, for one, argue they’d be better off going to church.”

For those like Brazile, being a religious voter means heeding the lessons of her Catholic grandmother who would open the Bible before her grandchildren and read her favorite Scripture from Galatians 6:9: “Do not grow weary in doing good for at the proper time we will reap a harvest if we do not give up.”

“That woman had so much faith, giving us that hope every day. Feeding that hope every day is what we should do in our lives to remove fear and doubt and hate because that is not of God. That is the devil we have to rebuke,” she said.