Caregiver for 53 years at Camilla Hall dies there at 82 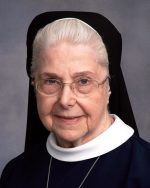 Sister Marie Paschal Penot, I.H.M., died Feb. 26 in Camilla Hall, Immaculata at age 82 and in the 64th year of her religious life.

Dolores Josephine Penot was born in Philadelphia as were her parents Daniel Joseph and Ann (Bergmark) Penot, all members of Most Blessed Sacrament Parish in Philadelphia.

Dolores attended St. Louis Elementary School in Yeadon and West Catholic High School, graduating in 1955. She entered the Sisters, Servants of the Immaculate Heart of Mary on Sept. 8, 1955 and received her habit and her religious name, Sister Marie Paschal, the following year. She pronounced first vows on Aug. 15, 1957.

Later she earned a degree from Immaculata University in theology and her certificate as a licensed physical therapist from the University of Pennsylvania.

From 1957 to 1966, Sister Paschal taught children in grades one, two and four, as well as music. She served children in St. Alice, St. Rose of Lima, St. Thomas, St. David, St. Richard, St. Cecilia, and Holy Name schools, all in the Philadelphia Archdiocese.

From 1966 through April 2019, Sister Marie Paschal served in Camilla Hall as a nurse and physical therapist. After serving there for 53 years Sister Paschal’s health deteriorated and she became a patient, a recipient of the service she rendered for so long and for so many, in April 2019.  She continued her apostolate of prayer as a patient until her death.

Sister Paschal is predeceased by parents, her brothers Daniel and Joseph, and her sister Patricia, and is survived by her sister-in-law Janet (Daniel), her loving nieces, nephews, grandnieces and grandnephews.