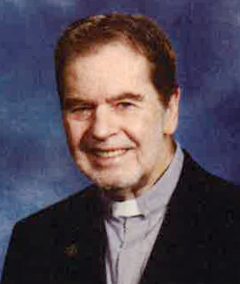 Born in Philadelphia, he was the son of the late Francis B. Burke Sr. and Martha (Aftanis) Burke. He was the husband of Phyllis (Howard) Burke. Deacon Burke was also previously married to Rita (Dugan) Burke who died in 1989.

Deacon Burke was a graduate of St. Thomas More High School and La Salle University. A former treasurer and controller of the Atlantic City Press, he later worked for the Archdiocese of Philadelphia as a business manager for several parishes.

A member of St. Bernadette of Lourdes Parish, he entered the diaconate program and was ordained by Cardinal Anthony Bevilacqua at the Cathedral Basilica of SS. Peter and Paul on June 6, 1999 and assigned to St. Bernadette, where he remained until his 2016 retirement.

“He was one of the kindest people you would have ever met,” said parish secretary Helen Kraus. “I worked with him when he was our business manager. He was very quiet with a good sense of humor.”

Deacon Thomas Fitzpatrick, who is now assigned to St. Bernadette, remembers Deacon Burke as someone who was a mentor to him.

“Most people in the parish would describe him as a saint,” Deacon Fitzpatrick said. “He was valued by everyone who ever met him, and he was never looking for praise. He took care of the people.”

The funeral Mass for Deacon Burke was celebrated March 17 at St. Bernadette Church by Father Shaun Mahoney. The Deacon of the Mass was Deacon Fitzpatrick.

In addition to his wife, Phyllis, Deacon Burke is survived by his daughter Patricia Dever and stepdaughters Catherine Brown and Ellen Croyleas well as 10 grandchildren, eight great-grandchildren and three siblings.

He is predeceased by his sons Frank, Charlie and Daniel; his first wife, Rita and his stepson Fred Jordan.

NEXT: Father Laurence Gleason, active in health ministry, dies at 67