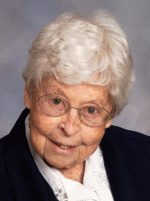 Mary Agnes was the daughter of Michael and Agnes (Bockius) Loftus, who raised their family in St. Raphael Parish, Philadelphia. Mary Agnes attended St. Raphael School then West Catholic Girls’ High School from which she graduated in 1942.

Later, as a sister, she earned her degree from Immaculata College.

She entered the Sisters, Servants of the Immaculate Heart of Mary on Aug. 16, 1944 and received her religious name, Sister Michael Raphael. She professed first vows on Aug. 15, 1946.

Sister Michael Raphael taught at St. Agnes School in Sellersville from 1945 to 1947.

During the course of her teaching ministry, spanning from September 1945 through June 1992, Sister Michael Raphael taught children from grades three through six, which included elementary music.

From 1992 to 2007, Sister Mary Agnes (who returned to using her baptismal name) rendered many acts of loving service at St. Louis Parish in Yeadon, St. Richard in Philadelphia, St. Joseph in Collingdale and St. Cyril in East Lansdowne.

In August 2007, Sister Mary Agnes continued her service at Camilla Hall as a member of the Apostolate of Prayer.

The funeral Mass was celebrated privately on March 25. A public memorial Mass will be celebrated at a later date.

NEXT: Deacon Francis Burke of St. Bernadette Parish dies at 80