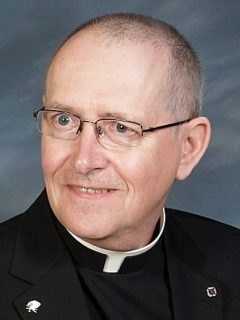 The youngest of the eight children of the late F. Edgar Gleason and the late Catherine (Pastorius) Gleason, he attended Visitation B.V.M. School, Norristown and Bishop Kenrick High School. He continued his education at Temple University and Northwestern University, earning bachelor’s and master’s degrees in voice.

Before discerning his religious vocation, as an operatic tenor he was pursuing a career in music, said his brother Robert.

“All through school he sang in the musicals,” he said. “He was a good kid and my little brother, and I always stuck up for him.”

As a young adult he pursued a career in music, especially grand opera, singing at various venues. He even sang in the chorus during an opera performance by Luciano Pavarotti.

As for the pull to religious life, Father Gleason’s brother attributes it to the training in faith by his parents, “especially my mother who was a saint,” and also at Visitation Parish under the influence of the late Father Henry Schuyler.

“My parents were surprised but delighted when he entered the seminary,” his brother said.

Father Gleason was ordained May 18, 1996 by Cardinal Anthony Bevilacqua at the Cathedral Basilica of SS. Peter and Paul. His first assignment was as parochial vicar at Our Lady of Ransom Parish, Philadelphia followed by St. Catherine of Siena Parish, Horsham; St. Luke the Evangelist Parish, Glenside and St. Agnes Parish, West Chester.

In 2016 he was appointed chaplain at Holy Redeemer Health System.

Because of the current restrictions on public assemblies, Archbishop Nelson Perez celebrated a private funeral Mass for Father Gleason at Visitation B.V.M. Church on Friday, March 20.

In addition to his five brothers and two sisters, Father Gleason is survived by many nieces and nephews.