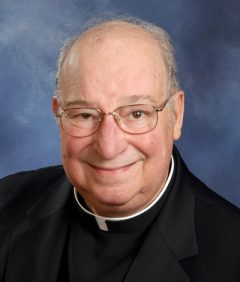 Born in Philadelphia the son of the late Joseph A. Farry and Jean (Kumbat) Farry, he attended Our Lady of Grace School, Penndel and Roman Catholic High School before entering St. Charles Borromeo Seminary.

He was ordained May 20, 1967 by Archbishop John J. Krol at the Cathedral of SS. Peter and Paul and his first assignment was as parochial vicar at St. Anthony of Padua Parish in Philadelphia.

Father Farry was appointed pastor of St. Leo Parish in 1991 and was named pastor emeritus in 2009.

Pat Lardon, who served as parish services director for 10 years under Father Farry, remembers him as “a friend to all of us who worked for him and a very generous man. He had a wry sense of humor which needed getting used to, but even up until Sunday (before he died) he was making jokes.”

Sister of St. Joseph Marianna Baranoski, who served as principal of St. Leo School while he was pastor, remembers, “We were opposite personalities, but he always supported me. He was a good friend and a great priest.”

After leaving St. Leo, Father Farry served as a senior priest at Queen of the Universe Parish, Levittown and even after his 2015 retirement stayed connected as a weekend assistant.

“He loved being a priest, and he was well loved here. He could make you laugh,” said Father John Wackerman, pastor of Queen of the Universe. “I remember on his 50th anniversary, he said, ‘Of all the 50 years, the good and the struggle, if I had to do it again I would do it all over.’”

“He was the kind of guy, if you did something for him, he would return the favor a hundred fold,” Father Wackerman said. “He would go out of his way to do good things for people. He was a man of charity.”

Archbishop Nelson J. Perez celebrated a funeral Mass for Father Farry at Queen of the Universe Church on Wednesday, March 11.

Among the concelebrants were Msgr. Daniel Sullivan, Father Wackerman, members of the St. Charles Seminary class of 1967 and Father Michael Hennelly, who was the homilist.

Interment was at Resurrection Cemetery, Bensalem.