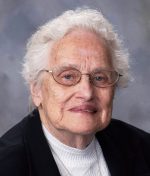 Sister Marie St. Anne McClung, I.H.M., died Feb. 26 in Camilla Hall, Immaculata at age 90 and in the 70th year of her religious life.

From 1992 to 2004, Sister Marie St. Anne assisted children and faculty at Holy Name School in Philadelphia. She then assisted in St. Gabriel Convent until 2014.

Sister Marie St. Anne’s service to the children, families, and Sisters never wavered throughout her religious life. In August 2014, her service continued at Camilla Hall where she engaged in the Apostolate of Prayer.