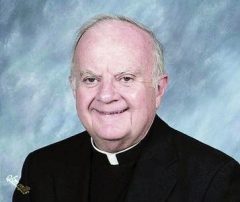 The son of the late Edward V. McGroarty and the late Margaret M. (McBride) McGroarty, he attended St. Joseph School in Collingdale and St. James High School then entered St. Joseph’s College where he studied for a bachelor’s degree in science.

It was while in college that his mother died. This, he said in an interview, was one factor in his consideration of the priesthood, along with encouragement from his pastor, Father Andrew Lavin. However, his father talked him out of applying to the seminary before he completed his degree.

Back then seminaries were somewhat different. Because he did not have Latin or Greek, St. Charles Borromeo Seminary insisted he start college all over again, which he did. After his studies there he was sent to Rome where he earned his license in sacred theology.

He was ordained a priest by Archbishop Martin O’Conner, rector of the North American College, in December 1962.

That was followed by studies at the Catholic University of America in Washington for a degree in sociology and marriage counseling.

This was followed by assignments to the former Catholic Information Center and the Family Life Office.

“There was a real emphasis in the church on family life in the 1970s and 1980s,” he later explained.

That was just one of the many programs focusing on marriage begun during his tenure at the Family Life Office that continue in some form today.

In an interview for his 50th anniversary as a priest, he suggested too much attention is paid today on families’ negatives circumstances.

The challenge, he said, “is to meet the needs of present day Catholics,” and “we should publicize the good things that are being done, not putting our light under a basket.”

Because of the current coronavirus crisis no funeral arrangements have been released. There will be a memorial Mass for Msgr. McGroarty at St. Matthew Church at a future date.

Msgr. McGroarty is survived by many nieces and nephews.