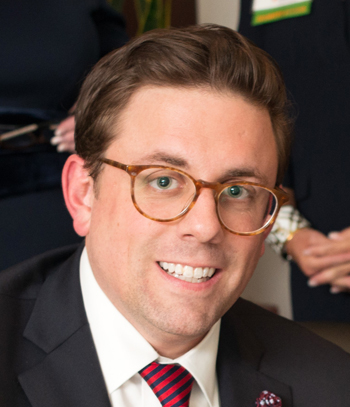 William J. (Bill) Phelan IV, president of the Board of Directors of the Catholic Charities Appeal.

The Catholic Charities Appeal (CCA) has appointed William J. (Bill) Phelan IV as president of its Board of Directors.

A venerable Philadelphia institution tracing back to its foundation by Cardinal John F. O’Hara in 1952, the CCA — now administered by the independent Catholic Foundation of Greater Philadelphia — has assisted with the funding of the many charitable outreach programs of the archdiocese since that time.

This was followed by his master’s degree in congressional and presidential studies, and his law degree from Catholic University’s Columbus School of Law.

During his time in law school he worked as a summer intern with Catholic Charities U.S.A. on a team studying a congressional bipartisan bill on immigration reform led by Sens. Ted Kennedy and John McCain, “at a time when bipartisanship was actually happening,” Phelan said.

The task of the team was to determine if the bill conformed to Catholic social teaching, which they determined it did.

After receiving his law degree he worked in Washington until 2014 when he returned to the Philadelphia area. He and his wife Megan are raising two preschool-age children, Benjamin and Patrick, in Sacred Heart Parish, Havertown where he is an active member.

A practicing attorney in family law, Phelan became the lead litigator at the Philadelphia office of Cordell and Cordell.

While family law provides opportunities to help people at some of the most difficult and painful that points in their lives, Bill Phelan was looking for something more.

A buddy from Catholic University who was a board member of CCA urged him also to apply for board membership and he did so in 2016. Now, at age 37, he is the youngest board president in CCA history.

“It’s a nonprofit that helps so many families in the archdiocese,” Phelan said. “Through my Catholic education I have been open to opportunities to assist others.

With the recent installation of Archbishop Nelson Perez, it is “such an exciting time in Philadelphia,” Phelan said. “I couldn’t be more grateful for this opportunity to lead the Catholic Charities Appeal Board of Directors as their new president. The Catholic Charities Appeal is truly the backbone to so many amazing organizations and programs in this archdiocese, supporting thousands of our neighbors in need.

“I look forward to working with Appeal supporters and beneficiaries to give hope to those who need it the most and to help bring the CCA to our younger generations.”

The challenges are many. The Appeal itself, which raised approximately $2 million in its founding year, has increased many times over the years since but has not kept up with the rate of inflation. One reason for this, Phelan points out, are recent changes in the federal tax code, which provide less of an incentive for people to donate to charities.

But he is optimistic for the future, and this year’s goal is $12.5 million. “We are built to weather these circumstances,” Phelan said. “This goes toward advancing Catholic social teaching, helping others whether in a secular or non-secular setting.”

Archbishop Perez has already met with the CCA board, Phelan noted. “His energy is so captivating and encouraging,” he said.

In its early years, the main fundraising outreach for the Catholic Charities Appeal was parish based through direct house-to-house solicitation by committee members who were parishioners themselves.

Now the effort is much more centralized, with appeals to major donors and use of church envelopes and mail solicitation.

“I would like to continue our relationship with the parishes and engage the younger generation wherever they are,” Phelan said.

However it’s done, charity remains a core tenet of Christianity. Jesus, in the Gospel of Matthew 25:40, made it very clear: “Whatever you did for one of these least brothers of mine you did for me.”