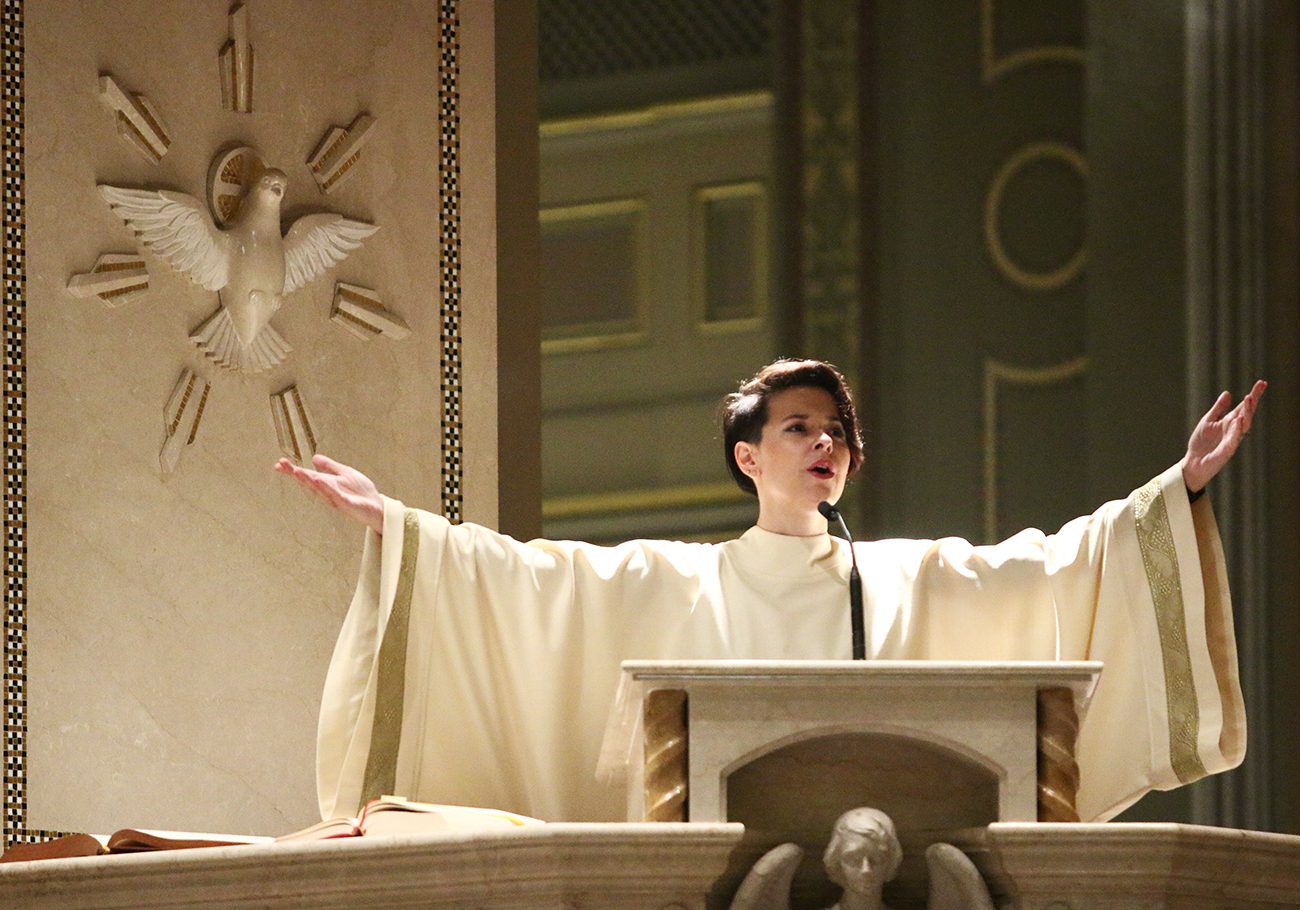 Marcelle McGuirk leads a virtual congregation in song during the Chrism Mass Monday, April 6 at the nearly empty Cathedral Basilica of SS. Peter and Paul, Philadelphia, which was closed to the public due to restrictions from the coronavirus pandemic. McGuirk served as cantor for all the liturgies of Holy Week and Easter Sunday, reaching an online audience of hundreds of thousands. (Photo by Sarah Webb)

Marcelle McGuirk’s Twitter handle is @soaringsoprano and that is not bragging, she is the real deal.

If you watched Archbishop Nelson Perez’s Easter Sunday Mass celebrated without a congregation at the Cathedral Basilica of SS. Peter and Paul, either on television at WHYY channel 12 or online, McGuirk was the cantor who opened with a joyous rendition of “I Know that My Redeemer Liveth” and kept going from there with a number of beloved hymns, including “Jesus Christ Is Risen Today,” “Gloria” and “The Strife Is O’er.”

Normally the full Cathedral Choir, of which she is a member, would have been singing for Easter Sunday Mass. But in the era of coronavirus and its restrictions that was impossible. Only a two-member schola in the choir loft along with organist Mark Loria and director Charlene Angelini, and McGuirk serving as cantor in the sanctuary, provided music for the liturgy.

On the other hand had it not been for the emergency situation, many viewers of the Mass would have missed viewing this outstanding liturgy.

“It was hard without the choir,” she said in an interview later. “It was very odd singing in an empty church. ” The choir, she said, “is an important part of the cathedral community. I was singing for them and to help people through these difficult times.”

McGuirk offered her gift as cantor not only for Easter Sunday, but for all the livestreamed liturgies in the preceding Holy Week. And because of the large online audiences, she made an impression on many.

Singing is really in her DNA. Back in her hometown of Scranton, Pa., her grandmother, Ann McGuirk, was the choir director at St. Michael Church and had Marcelle singing when she was just a toddler. Her dad, Rob McGuirk, also had a great tenor voice.

McGuirk studied music at Marywood University in Scranton with the dream of singing grand opera. As a matter of fact she has sung in various operatic venues around the country and she also does a bit of music teaching. 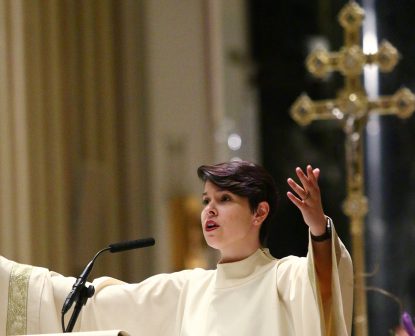 Marcelle McGuirk serves as cantor for the Chrism Mass April 6 at the Cathedral Basilica of SS. Peter and Paul, Philadelphia. The Scranton native and professional singer is also a member of the Cathedral Choir. (Sarah Webb)

Her own musical taste lies in classical music and church music. If she has favorite composers, they would be Mozart and Puccini. But she also relaxes with Debussy, Chopin and Rachmaninov along with such Broadway favorites as Rodgers and Hammerstein’s “Sound of Music.”

She and her husband Chris Fletcher settled in Philadelphia in 2011 and she became part of the music family at the cathedral almost immediately.

The quality of music at the cathedral, first under music director John Romeri and now Charlene Angelini, “has been very high,” McGuirk said. “It helps people get through these very difficult times. We are always keeping in mind the liturgical meaning of the music, reaching the hearts and minds of the people who are gathered there and bringing them closer to God and I am grateful we can do it. It is really what we do every year, although I don’t think we will be together as a choir for some time.

“Church music has been part of my life from the very beginning and I think it will always be so.”

From a Philadelphia perspective, one hopes she will always be at the cathedral, both as a soloist and as a member of its magnificent choir, in happier times to come.

NEXT: The living tell the story of God’s goodness in pandemic’s wake