Catholic Church in Germany to increase payments to abuse survivors 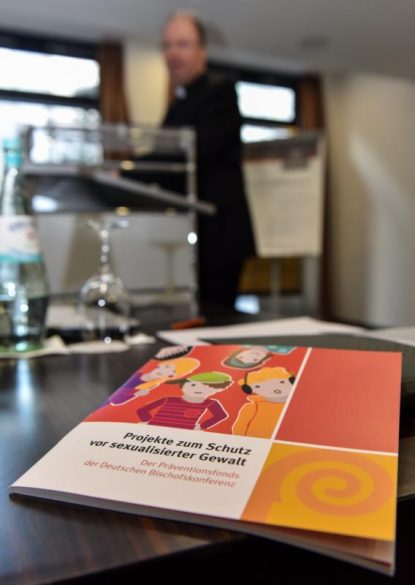 A booklet is seen as Bishop Stephan Ackermann, abuse commissioner of the German bIshops’ conference, speaks at a training course for abuse and prevention commissioners in Cologne March 2, 2016. (CNS photo/Harald Oppitz, KNA)

Bishop Stephan Ackermann of Trier said the Catholic Church in Germany will orient itself to compensation tables and the corresponding court rulings applied in civil law cases.

Those payments currently range between 5,000 euros ($5,650) and 50,000 euros per case. The bishop said the church will always pay sums “at the higher end of the margin of discretion.”

If the courts raise the sums, then the church payments will increase as well.

Since 2011, the church had offered a lump sum of 5,000 euros per case “in recognition of the suffering” of the victims, KNA reported.

Bishop Ackermann said the procedure for compensation would avoid bureaucracy.

An independent experts’ commission will estimate the severity of each reported case, then make a recommendation.

This also would apply to cases which under the statute of limitations has expired.

In accordance with the number of cases and their financial strength, dioceses and religious orders implicated will pay money into a central account from which the compensation will be made, KNA reported.

Those dioceses and religious orders that would be financially overburdened will receive support from wealthier dioceses.

The victims’ association “Eckiger Tisch” has been pushing for a fundamentally different model and higher compensation sums. Its spokesman, Matthias Katsch, has called on the bishops to choose a compensation model that would provide for as much as 400,000 euros per case.

This demand caused criticism and fears in less-affluent dioceses as well as in Protestant churches in Germany. Some voices also warned that if the church paid sums of such size, the Catholic Church would be creating an exclusive privilege that would not be available to abuse victims elsewhere in society.

NEXT: Pope urges priests to tend to sick during epidemic