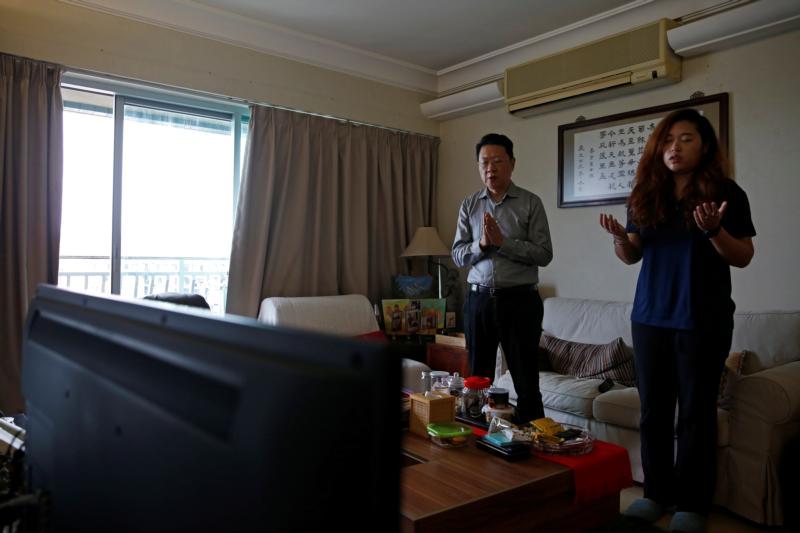 Stephen Wong and his daughter, Amanda, participate in an online Mass at their home March 8, 2020, after the Diocese of Hong Kong temporarily suspended public Masses at churches, following the COVID-19 outbreak. (CNS photo/Tyrone Siu, Reuters)

HONG KONG (CNS) — A Catholic diocese in China’s Shaanxi province has donated thousands of face masks to communities in the Vatican and Italy to help them fight the coronavirus.

Ucanews.com reported Xi’an Diocese has donated 24,000 disposable medical masks to the Vatican and religious communities and dioceses in Italy such as Milan and Bologna.

“When mainland China experienced the epidemic, the Holy See and the Italian church group helped by sending medical masks. We have now effectively contained the virus, but Italy is now suffering. It is our turn to help them,” Father Chen Ruixue of Xi’an told ucanews.com.

The coronavirus, he said, “is the public enemy of humanity. Only when all people work together to fight the disease can we overcome the pandemic.”

The virus was first reported in the central Chinese city of Wuhan in December, slowly spreading across the globe.

In China, the “people’s economic life is returning to normal” as the infections have come down, Father Chen said.

As of March 19, China had reported 81,139 COVID-19 cases with 3,253 deaths. However, the number of newly diagnosed cases on March 18 was only 34, all of which were overseas cases. The death toll also came down on March 18, with only eight fatalities.

After China, Italy has become the worst-affected country, with hundreds of deaths and infections in the past few weeks, killing nearly 3,000 people. At least 475 people died in Italy on March 18 alone.

The Vatican has donated masks to China since January.

Father Chen said he was told the masks the Vatican receives in a donation would be distributed to “the needy people on the streets, which is admirable and an urgency.”

The Archdiocese of Milan covers the hardest-hit area of Italy, and some groups and families in Milan have supported the students of the Shaanxi Theological Institute for many years, he said.

“Italy needs help now. We will continue to do our best to raise more materials to donate to them to fight the epidemic,” he said. “We sincerely hope that these donations, however small they are, will help some people. It will also help promote the friendship between China and the Vatican, and China and Italy.”

NEXT: Across Europe, shrines close in coronavirus fight