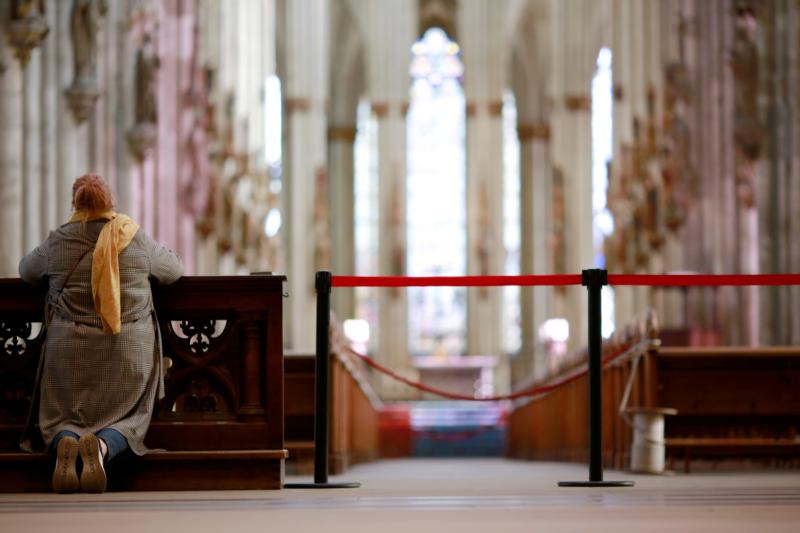 WASHINGTON (CNS) — In an effort to stem the pandemic of COVID-19, bishops’ conferences and dioceses around the world began suspending public Masses.

Europe became the continent where the disease was spreading fastest. Italy was the worst-hit; despite the country being on lockdown, in the 24-hour period ending at 6 p.m. March 15, coronavirus deaths in Italy peaked at 368, bringing the total number of deaths to 1,809 out of 24,747 cases.

As the virus spread, the Catholic Church in France suspended all public Sunday Masses, weddings and baptisms. Funerals could only be celebrated if there were fewer than 100 people in the congregation, and if people were spaced from each other by at least one empty pew or chair; no one over 70 years of age could attend, according to guidance issued March 14 by the French bishops’ conference.

Spain, the worst-affected country in Europe after Italy, with more than 7,800 people known to have the virus and nearly 300 deaths, was under quarantine enforced by the police and the army.

The bishops responded by publishing on their website links to 11 television channels and four radio stations that were livestreaming or broadcasting Masses, along with the times when the Masses could be followed.

Netherlands, Belgium, Germany, Slovakia, Malta and Austria also suspended public Masses for at least two weeks. On March 16, the Diocese of Haarlem-Amsterdam began a nine-day novena to pray for an end to the pandemic.

In Ireland, churches were to sound their bells on St. Patrick’s Day, March 17, as Masses remained suspended because of the coronavirus.

In North America, the number of dioceses canceling Masses increased as the March 13-15 weekend progressed. Along with the suspension of Masses came a dispensation of the Sunday obligation. Some dioceses continued to offer Masses but encouraged anyone with a compromised immune system, especially the elderly, to remain home.

On March 12, the bishops of Quebec became the first in Canada to cancel all weekend Masses across the province until further notice. The step was taken in response to measures announced by the Quebec government, including limiting public assemblies to fewer than 250 people.

In a letter published March 15, Bishop Christian Rodembourg of Saint-Hyacinthe, president of the assembly of Quebec bishops, said the decision was not made lightly.

“By canceling all Sunday gatherings, even small ones, we take care of each other and protect our most fragile brothers and sisters,” he wrote. “In a certain way, by depriving ourselves of the celebrations of the Eucharist, we are still living the Eucharist: We are losing something precious, certainly, but out of love, for the sake of the smallest and weakest among us. On the cross, Christ gave his life, so that we may receive salvation and life in abundance.”

In Peru, the government declared a state of emergency effective March 16, closing the country’s borders and restricting freedom of movement and assembly, including religious services. Several dioceses in Peru had already suspended the Sunday obligation or announced Mass cancellation, but the decree made cancellations mandatory. Peru reported its first confirmed case of COVID-19 March 6; by March 15, that figure had risen to 71.

On March 12, Father Luis Nunez Del Prado Reynoso, 47, pastor of a parish in a low-income neighborhood in southern Lima, became the first person in Peru hospitalized for COVID-19. Because the priest had not traveled outside of Peru recently, he apparently had caught the virus from another person, making his one of the earliest reported cases of community transmission in the country. He remained in serious condition March 16.

In, Philippines, after the government canceled all gatherings March 15-April 14, the bishops canceled all Holy Week celebrations.

Instead of conducting public liturgies or celebrations, the bishops were encouraging Catholics to stay at home and follow activities on TV, radio or online, reported ucanews.com. They also asked them to “pray the rosary, as it is a good prayer to meditate on the mysteries of the life of the Lord that we intensely celebrate in the universal church during the Holy Week.”

Some dioceses in Vietnam canceled public Masses and encouraged people to watch livestream.

In China, where the number of COVID-19 cases was decreasing, a bishop asked Catholics to continue to avoid public gatherings and cautioned against a new wave of unacceptable online prayer programs, ucanews.com reported.

Bishop Peter Fang Jianping of Tangshan particularly warned against the preaching of one priest, Father Fei Zhisheng, who maintains that illness is a result of sin.

“Some of the teachings of Father Fei are not in line with the Catholic faith, and everyone is reminded to stop sharing information about Father Fei,” Bishop Fang said.

Bishop Serverus Jjumba of Masaka, Uganda, told people God sent the coronavirus to show he is still in command.

”God is angry with mankind because people no longer respect him, and they behave in (an) unbecoming manner,” he said. He also asked the Catholic community to pray to God through the 22 Ugandan martyrs so that COVID-19 ended throughout the world.

In mid-March, Kenyan bishops issued guidelines — most bordering on hygiene — similar to those issued by countries as the COVID-19 outbreak began. Holy water fonts were emptied, and soap and water were placed at strategic places. Worshippers were instructed to wash hands before Mass. But on March 15, the Kenyan government moved closer to closing places of worship, warning people not to congregate for wedding and funerals. It is also shut down all schools and learning institutions indefinitely.

The Ghana Catholic Bishops’ Conference took stronger measures. On March 16, it suspended all public Masses, retreats and pilgrimages for four weeks and closed schools indefinitely. It suspended weddings and funerals, and said burials could have no more than 25 people in attendance.

PREVIOUS: Text of pope’s prayer to Mary during coronavirus pandemic

NEXT: Public won’t be admitted to papal Holy Week liturgies