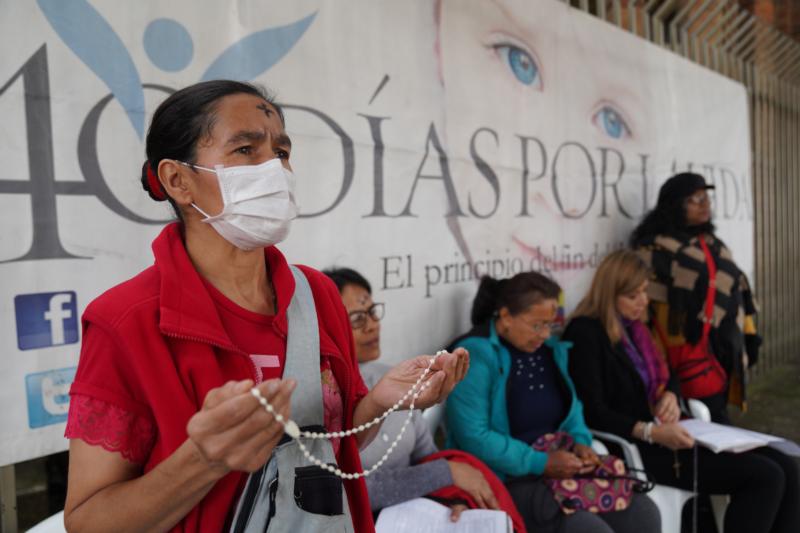 Women pray outside an abortion clinic in Bogota, Colombia, Feb. 26, 2020. The vigil was organized by 40 Days for Life, a U.S. pro-life group that now has branches in more than 60 countries. (CNS photo/Manuel Rueda)

BOGOTA, Colombia (CNS) — Jenny Prada showed up at a pro-life protest holding a rosary and wearing a T-shirt stamped with a picture of the Virgin Mary.

She was among hundreds of Catholics who gathered outside of Colombia’s Constitutional Court.

“I aborted my child when I was 19,” said Prada, who is now 38 and part of a church group called the Pastoral for Life.

“Abortion is a tragic experience. And it’s something that we don’t want any woman to go through,” she said. “What we need is support, to get education, to get jobs so that we can sustain our children.”

Catholic groups in Colombia took to the streets in February to voice their discontent with a proposal that sought to drastically expand access to abortion in the South American country. But although official Catholic teaching condemns the intentional killing of the unborn at any time after the ovum is fertilized, some Catholics also backed the proposal.

Following a flood of legal complaints from pro-life groups and groups favoring abortion, a judge in Colombia’s Constitutional Court proposed that abortion be permitted on request until the 16th week of pregnancy.

On March 2, a majority of judges on the court said they could not vote on that proposal because the complaint that had begun the debate on abortion had been inadequately formulated. That means that abortion is still legal in Colombia, but only under special circumstances, such as rape, or when carrying out a pregnancy is detrimental to the mother’s health.

While access to abortion has been widespread in the United States for decades, only a small number of countries in Latin America allow abortion on demand, including Cuba, Uruguay and Guyana. Six countries in the region, including El Salvador, Honduras and Haiti, ban abortion under any circumstances and have imprisoned women for illegally terminating pregnancies.

But some countries are moving toward liberalizing abortion laws and allowing women the right to request the procedure without any special permits from legal and medical authorities. Argentine President Alberto Fernandez said March 1 that within 10 days he would send a bill to congress that seeks to legalize abortion “at early stages of pregnancy.”

In Colombia, a smattering of Catholic groups and conservative politicians have protested the possible liberalization of abortion laws. The Colombian bishops’ conference responded to the recent court proposal with a video that describes abortion as “a death penalty on unborn children.”

“The truth is that women don’t need abortion, what they need is companionship and support,” Archbishop Luis Rueda Aparicio of Popayan wrote in a statement following the court proposal. “Women have the right to be informed of alternatives to terminating pregnancy, like for example giving their children up for adoption.”

But some Catholics in Colombia also came out in support of the proposal to lift most restrictions on abortion, reflecting changing views on the complicated subject.

Sandra Mazo coordinates a women’s group called Catholics for the Right to Choose. She said it was “regrettable” that the church’s hierarchy is “stuck in antiquated positions.”

Mazo said the current restrictions on abortion in Colombia lead thousands of young women to terminate their pregnancies in underground clinics that have poor sanitation standards.

“Maternity should not be an obligation,” Mazo said. “You can’t just give women one option. You need to consider that everyone has a unique story.”

Carmina Navia, a Catholic theologian based in the city of Cali, told Catholic News Service: “I think there is broad consensus (among Catholics) that there is a need to avoid unwanted pregnancies, but there are different views on what to do in the face of this massive and undeniable reality.”

“Women will seek abortions, whether the church wants it or not, so some of us think that the state should guarantee them the right to do it in a secure setting with proper medical attention. We must separate the obligations of the state from the beliefs of religious groups,” Navia wrote in an email.

Colombian Catholics who oppose proposals to increase access to abortion say unborn babies have rights that are above public health concerns.

“We are talking about a human being who is in the womb,” said Father Harold Guarnizo, director of the Pastoral for Life in the Diocese of Fontibon. “This person may not yet be a citizen. But he is a human who has the right to live.”

Father Guarnizo founded the Pastoral for Life five years ago, after members of his parish asked him if anything could be done to defend unborn children. The group participates in protests and prayer vigils outside abortion clinics but also has mobilized to help vulnerable pregnant women.

Father Guarnizo said his group has raised funds for young mothers who have thought about aborting because they do not know how they will sustain their children. It also directs these mothers toward foundations and Catholic agencies that teach them job skills.

One of these groups is 40 Days for Life, which was founded in Texas more than a decade ago, but now has branches in more than 60 countries.

The Colombia branch, run by activist Pamela Delgado, has participated in the recent wave of protests, but also does weekly workshops for vulnerable pregnant women to learn skills like sewing, which can lead to future work. It also collects toys, clothes and furniture that are sold to these women at low prices.

“Our goal is to embrace women who are in crisis and need help,” Delgado said. “We want to show them that they can transition from a state of crisis to a tranquil and happy motherhood.”