Italian priests, religious women are among victims of COVID-19 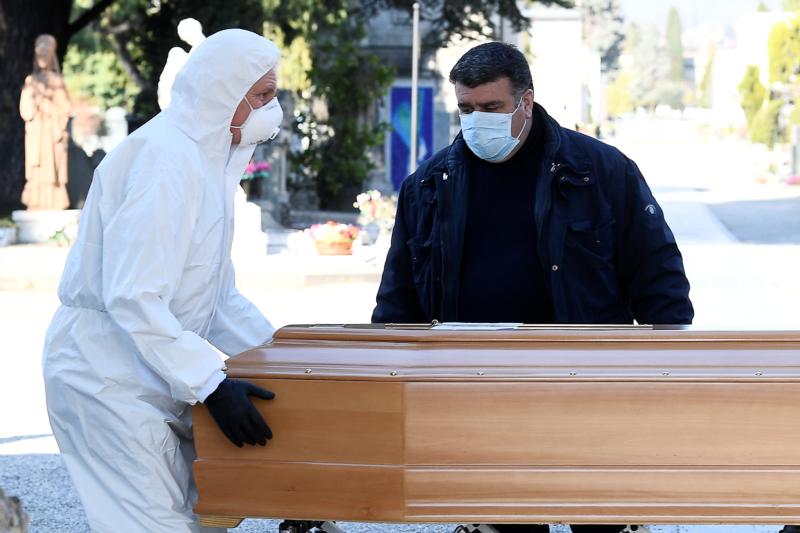 Men in Bergamo, Italy, transport a coffin of a person who died from the coronavirus disease in this photo shot March 16, 2020. A number of priests and religious women have been among the nearly 2,000 people who have died in Italy because of illness connected with COVID-19. (CNS photo/Flavio Lo Scalzo, Reuters)

ROME (CNS) — A number of priests and religious women have been among the nearly 2,000 people who have died in Italy because of illness connected with COVID-19.

One member of the Little Missionary Sisters of Charity died March 15 at the age of 88 after she and 23 members of her community in Tortona, near Milan, were evacuated by helicopter March 13 and hospitalized for fever and trouble breathing. Another unidentified nun was said to be in critical condition, ANSA, the Italian news agency, reported March 15.

In the hard-hit Diocese of Bergamo, Bishop Francesco Beschi said March 16 that many of his priests have been exposed to the virus. Twenty have had symptoms serious enough to be hospitalized while six have died in the past week.

In another part of northern Italy, Father Guido Mortari, 83, died March 13 of pneumonia; his test results for COVID-19 had not come back at the time of his death. He had served as a parish priest in his hometown of Reggio Emilia for more than 40 years.

In Cremona, Msgr. Vincenzo Rini, 75, died March 14 after being hospitalized because of COVID-19. He was a journalist and directed the diocesan weekly, “Catholic Life,” for more than 30 years. He also served as president of SIR, the news agency of the Italian bishops’ conference.

The bishop there, 62-year-old Bishop Antonio Napolioni, was still recovering in the city’s public hospital from coronavirus March 16.

In an interview with Vatican News March 14, he said his condition was improving and he urged people to take seriously all precautions and mandates.

Because of the risks associated with the coronavirus, there was no such thing as being too cautious, the bishop said.

“If the situation forces us to take a step back” from all the hustle and bustle or a frenetic lifestyle, then this was an opportune moment, he said.

He had been in Rome in early March with other French bishops for their “ad limina” visit. They met for two and a half hours with Pope Francis March 9 in a closed-door meeting in which each individual was seated at least three feet from each other, as per health safety guidelines at the time.

While he was in Rome, Bishop Delmas felt the first symptoms, which continue to be mild, the diocese said in a communique. He and the other 28 bishops who made the trip to Rome were currently in isolation, it added.

NEXT: Public Mass ban in Italy leads to new focus on ‘spiritual Communion’