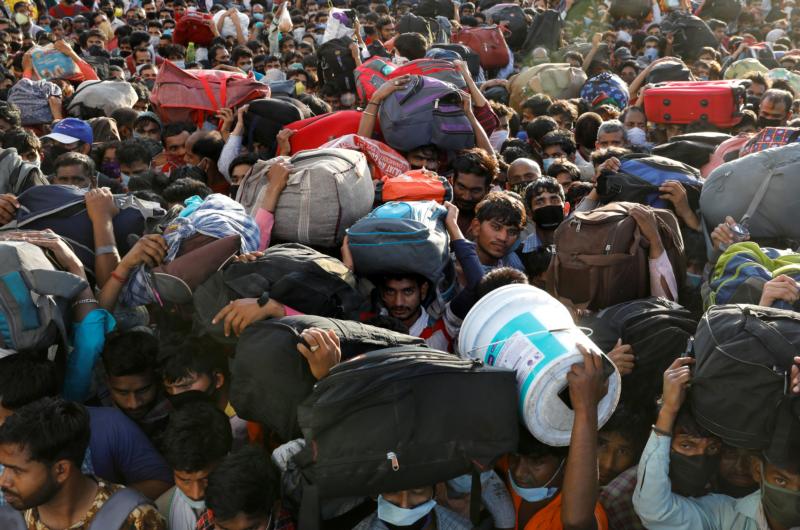 Migrant workers crowd outside a bus station in Ghaziabad, India, March 28, 2020, as they wait to board buses to return to their villages during a 21-day nationwide lockdown to limit the spread of COVID-19. (CNS photo/Anushree Fadnavis, Reuters)

The three-week COVID-19 lockdown of India’s 1.37 billion people has stranded millions of domestic migrant workers and left people scrambling for food and other basics amid the ensuing harsh and often violent crackdown by police.

“Especially when I look at my poor brothers and sisters, I definitely feel that they must be thinking, what kind of prime minister is this who has placed us in this difficulty?” Indian Prime Minister Narendra Modi said in his weekly broadcast address to the nation March 29. He ordered the lockdown five days earlier.

“I especially seek their forgiveness. I understand your troubles, but there was no other way to wage war against (the) coronavirus. … It is a battle of life and death, and we have to win it.”

Clive Fernandes, a Catholic who manages a hotel in the western coastal state of Goa, said: “The local government has handled the situation very poorly. The availability of basic food items, fruit, vegetables and food stocks in our state was not maintained.”

Fernandes, whose hotel has been closed under lockdown rules, added that the home delivery system is a complete failure in most villages in the area, and no arrangements were made to feed migrant laborers, who often sleep where they work.

“This will lead to spreading the virus, as they are out on the streets in search of food. As well, there is no proper infrastructure in the hospitals, God forbid this virus spreads,” he said.

Goa is about 45% Christian, and most of the Christians are Catholic. Some Catholics in the state told Catholic News Service that police had been caning people in the street and forcing them to do pushups and squats, despite the lack of food.

Father Jaison Vadassery, secretary of the Conference of Catholic Bishops of India’s commission for migrants, told ucanews.com: “Whenever there is a pandemic, rioting or a political crisis, the first to suffer the most are migrant workers, and even this time there is no exception, and we are helpless to support the poor workers.”

He added that if people had been informed earlier by the government or higher authorities, many organizations, including the church, would have been able to help migrants, “but, unfortunately, that did not happen. We are still trying to help them by urging the government to implement mechanisms to reach them.”

But some Goan Catholics appeared supportive of Modi’s measures.

Jason Dias, 39, an airline worker in self-isolation, noted the country was on lockdown until April 15.

“We have to wait until then to say if it worked. At this point, looking at the present scenario of Goa and India, I feel it’s working. My family and I definitely feel safer, because who knows who is carrying the virus,” he told CNS.

And many Catholics were unhappy with the cancellation of Masses, Dias noted that most Catholic were participating in livestreamed Masses.

“We are certainly feeling spiritually low. We miss our church,” he said. “But we certainly understand that the lockdown is absolutely necessary.”

“This crisis has brought my family and me closer to God,” he said. “We are shocked at what is happening around the world, and we are praying fervently for God’s hand of protection on our lives,” he added.

NEXT: Vatican publishes document on right to water access