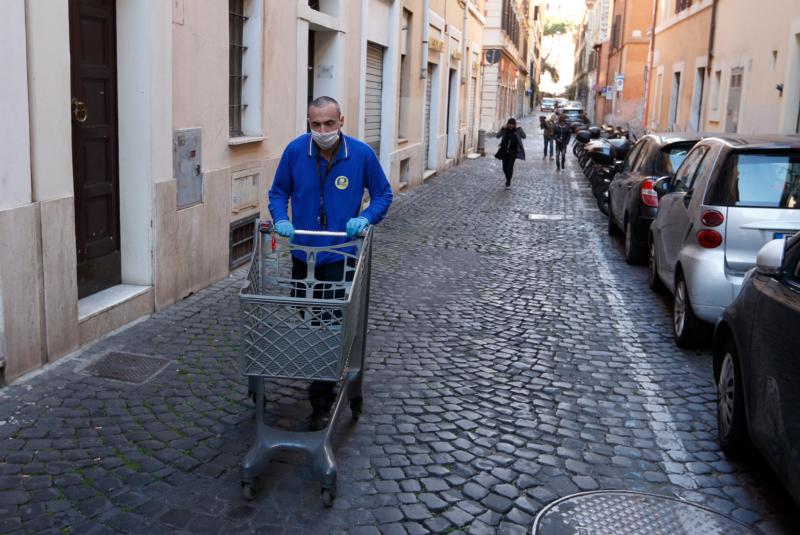 A supermarket employee wearing a mask for protection from the coronavirus pushes an empty grocery cart near the Vatican in Rome March 11, 2020. Many aspects of daily life are going on as normal, despite a lockdown in all of Italy to prevent further spread of COVID-19. (CNS photo/Paul Haring)

VATICAN CITY (CNS) — Pope Francis entrusted to Jesus’ mother the suffering and anguish of millions of people affected by the coronavirus pandemic.

In a video message broadcast March 11, the pope prayed before a portrait of Our Lady of Divine Love, beseeching her to “not disdain the entreaties of we who are in trial” but to “deliver us from every danger.”

“We entrust ourselves to you, Health of the Sick, who at the cross took part in Jesus’ pain, keeping your faith firm,” the pope prayed. “You, Salvation of the Roman People, know what we need, and we are sure you will provide so that, as in Cana of Galilee, we may return to joy and to feasting after this time of trial.”

The pope’s video message was aired on TV2000, the television channel of the Italian bishops’ conference, and the Diocese of Rome’s Facebook page. Cardinal Angelo De Donatis, papal vicar of Rome, celebrated a Mass at Rome’s Shrine of Divine Love that was aired live after the pope’s message.

The Mass, according to the Diocese of Rome, capped a day of prayer and fasting for the city and for Italy, which has been under a government-mandated lockdown to contain the spread of the coronavirus.

The image of Our Lady of Divine Love is of particular significance for Catholics in the city of Rome, especially during troubling times.

It was before the original image of Mary and the child Jesus at the shrine where Pope Pius XII prayed in 1944, imploring the Mother of God to protect the Roman people during the final battle for the city’s liberation from Nazi occupation.

Over seven decades later, his successor once again implored Mary’s protection for the city of Rome, Italy and the whole world now threatened by the pandemic.

“Help us, Mother of Divine Love, to conform to the will of the Father and to do as we are told by Jesus, who has taken upon himself our sufferings and carried our sorrows to lead us, through the cross, to the joy of the resurrection,” Pope Francis prayed.

In his homily during the Mass, Cardinal De Donatis echoed the pope’s prayer to Mary.

“We are here to cry out: ‘Save us, Lord, by your mercy,” he said. “Mary is here with us, and we pray for her powerful intercession to be freed by the evil of the virus.”

The cardinal said the faces of many Christians today, despite their faith, reflect the same anguish experienced by Christ in the Garden of Gethsemane.

Nevertheless, Christians must trust in their heavenly father, like Jesus, who “had the permanent awareness that no one had the power to tear him away from God’s hands.”

“It is an awareness that each one of us must guard in these difficult times,” Cardinal De Donatis said. “The antidote, the therapy for the anguish of the present moment is to entrust yourselves to God’s hands. We are in his hands, and no one can tear us away from him.”

NEXT: Text of pope’s prayer to Mary during coronavirus pandemic