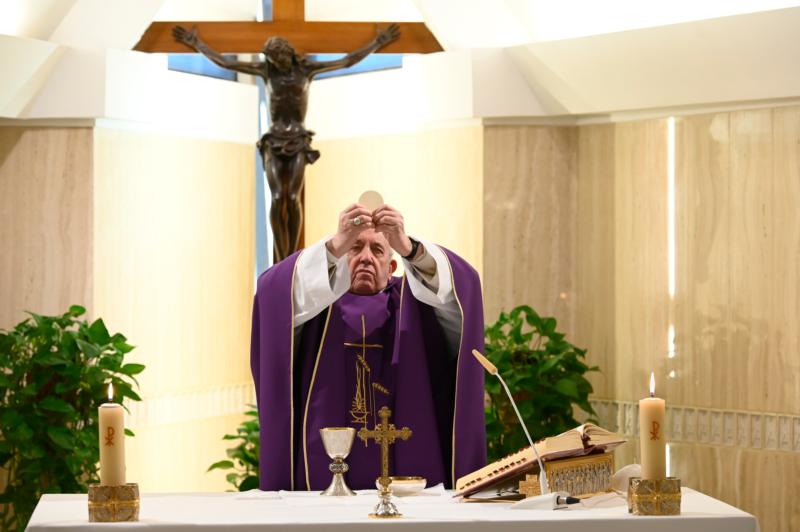 Pope Francis celebrates Mass in the chapel of his Vatican residence, the Domus Sanctae Marthae, March 30, 2020. The pope offered the Mass for "the many people who cannot cope, who remain frightened by this pandemic." (CNS photo/Vatican Media)

VATICAN CITY (CNS) — Pope Francis offered his daily morning Mass for those who find themselves living in fear of the coronavirus pandemic sweeping the world.

“Let us pray today for the many people who cannot cope, who remain frightened by this pandemic. May the Lord help them to stand up, to react for the good of all society and the entire community,” the pope said March 30 at the start of his livestreamed Mass.

In his homily, the pope reflected on the day’s first reading and Gospel, which recalled the stories of two women — one falsely accused and the other caught in the act of sin — who faced death sentences.

The first reading from the Book of Daniel, recounted the story of Susanna, a just woman falsely accused of adultery by two corrupt judges. The Gospel reading from St. John, however, recalled a woman caught in the act of adultery and sentenced to be stoned by the doctors of the law who “were not corrupt, but hypocrites,” the pope said.

“These women, one fell into the hands of hypocrites and the other into the hands of the corrupt; there was no way out,” he said. “The first explicitly trusts God and the Lord intervened. The second, poor thing, knows that she is guilty, exposed before all the people. The Gospel doesn’t say it, but surely she was praying inside, asking for some kind of help.”

Nevertheless, the pope said that in both instances God intervened, and while he helped the hypocrites convert, he does not forgive the corrupt ones “simply because a corrupt person is incapable of asking for forgiveness.”

Corrupt people “are sure of themselves, they destroy and continue to exploit people,” the pope said. “They put themselves in the place of God.”

Pope Francis said that like the witnesses in both cases, who were able to praise God and discover his mercy, Christians should also reflect on their own lives and how the Lord has intervened.

“Each one of us has our own story, our own sins. And if you don’t remember them, think about it, you’ll find it. Thank God if you find them because, if not, you are corrupt,” the pope said. “Let us look to the Lord who does justice but is also very merciful. Let us not be ashamed of being in the church; let us be ashamed of being sinners.”