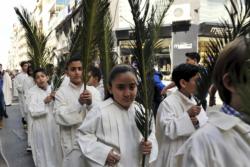 VATICAN CITY (CNS) — The Vatican has asked Catholic bishops around the world, both in the Latin rite and the Eastern Catholic Churches, to provide their faithful with resources to support personal and family prayer during Holy Week and at Easter, especially where COVID-19 restrictions prevent them from going to church.

The Congregation for Eastern Churches, publishing “indications” March 25 for the Paschal celebrations in the churches it supports, urged the heads of the churches to issue concrete, specific norms for the celebrations “in accordance with the measures established by the civil authorities for the containment of the contagion.”

The statement was signed by Cardinal Leonardo Sandri, congregation prefect, and asked the Eastern churches to “arrange, and distribute through the means of social communication, aids that allow an adult of the family to explain to the little ones the ‘mystagogy’ (religious meaning) of the rites that under normal conditions would be celebrated in the church with the assembly present.”

The Congregation for Divine Worship and the Sacraments, updating a note originally published March 20, also asked that bishops’ conferences and dioceses “see to it that resources are provided to support family and personal prayer” during Holy Week and Easter where they cannot go to Mass.

The Congregation for Eastern Churches’ suggestions for celebrating the liturgies in the midst of the pandemic were not as specific as those issued for Latin-rite Catholics because the Eastern Catholic churches have a variety of liturgical traditions and may follow the Julian calendar, with Palm Sunday and Easter a week later this year than on the Gregorian calendar used by most Catholics.

Still, the congregation said, in the Eastern Catholic churches “the feasts are strictly to be kept on the days foreseen by the liturgical calendar, broadcasting or streaming those celebrations that are possible, so that they can be followed by the faithful in their homes.”

The one exception is the liturgy at which the “holy myron,” or sacramental oils, are blessed. While it has become the custom to bless the oil the morning of Holy Thursday, “this celebration, not being linked in the East to this day, can be moved to another date,” the statement said.

Cardinal Sandri asked the heads of the Eastern Catholic churches to consider ways to adapt their liturgies particularly because “the participation of the choir and ministers expected by some ritual traditions is not possible at the present time when prudence advises avoiding gathering in significant numbers.”

The congregation asked the churches to omit rites usually held outside the church building and to postpone any baptisms scheduled for Easter.

Eastern Christianity has a wealth of ancient prayers, hymns and sermons that the faithful should be encouraged to read around the cross on Good Friday, the statement said.

Where going to the nighttime celebration of Easter liturgy is not possible, Cardinal Sandri suggested “families may be invited, where possible through the festive sound of the bells, to gather to read the Gospel of the Resurrection, lighting a lamp and singing some troparion or songs typical of their tradition that the faithful often know by memory.”

And, he said, many Eastern Catholics will be disappointed that they cannot go to confession before Easter. In line with a decree issued March 19 by the Apostolic Penitentiary, “let pastors indicate to the faithful the recitation of some of the rich penitential prayers from the Oriental tradition to be recited with a spirit of contrition.”

The decree from the Apostolic Penitentiary, a church tribunal dealing with matters of conscience, asked priests to remind Catholics facing “the painful impossibility of receiving sacramental absolution,” that they can make an act of contrition directly to God in prayer.

If they are sincere and promise to go to confession as soon as possible, they “obtain the forgiveness of sins, even mortal sins,” the decree said.

Bishop Kenneth Nowakowski, the new head of the Ukrainian Catholic Eparchy of the Holy Family of London, told Catholic News Service March 25 that a group of Ukrainian bishops already is working on guidelines for their church.

One popular Easter tradition, followed especially among Ukrainians living abroad without their families, he said, is to have the bishop or priest bless a basket of their Easter foods, including decorated eggs, bread, butter, meat and cheese.

“We want to find ways to livestream the liturgies and help our faithful understand that it is Christ who blesses,” not the priest, Bishop Nowakowski said.

In addition, he said, “Our Lord is not restricted by the sacraments; he can come into our lives in these very trying circumstances in many ways.”

PREVIOUS: Pope invites all to join him in prayer at same time March 25