Need for food grows in one of America’s wealthiest counties 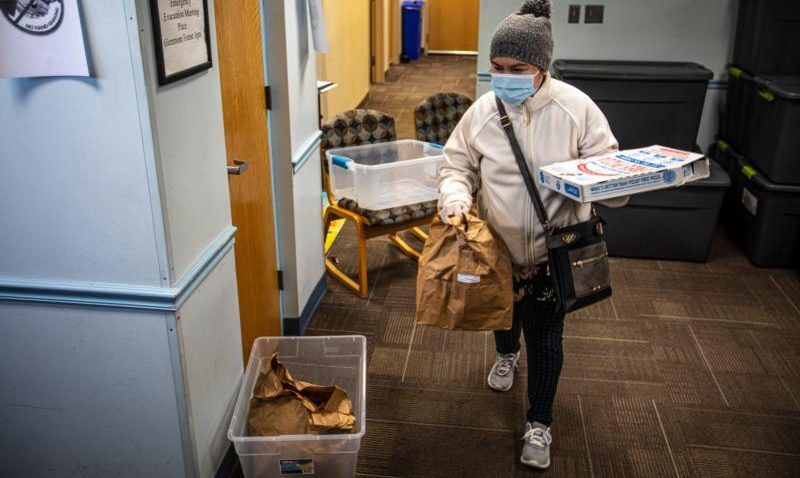 A masked Maryland resident leaves the Catholic Charities Family Center in Wheaton, Md., April 22, 2020, with a donated pizza and other food staples for members of her household, all in need since the start of the coronavirus pandemic. Ed Treacy, a Domino's Pizza franchise owner in Potomac, Md., gave 250 pizzas to Maryland families as part of the Catholic Charities center's weekly food distribution for the needy. (CNS photo/Chaz Muth)

WHEATON, Md. (CNS) — Even in a county long acknowledged as one of the 20 wealthiest in the United States, there are people at risk of going hungry.

Only now there are more of them.

It used to be that the Catholic Charities Family Center in Montgomery County, Maryland, would help about 150 people each week acquire enough food to feed their household.

Since the economic upheavals induced by the coronavirus pandemic in mid-March, that many are coming each day, three days a week.

Signs outside the family center, inside a Catholic mission church, say there will be food for only 100. The others will get grocery gift cards.

The social distancing that has become part and parcel of daily life is no different at the family center. Clients in need of food stay roughly 6 feet apart, although that was a tough task to take on during a chilly morning made worse with constant breezes of 10-15 mph.

In the prepandemic days, clients could “shop” for the food items they wanted from a room inside the family center. Now, only two clients can be served at a time, and they don’t go anywhere near the pantry; a third can wait in the hallway.

But there was a treat on this particular morning. Ed Treacy, who owns five Domino’s Pizza locations in the county — and additional shops elsewhere in Maryland and in Pennsylvania — came with other Domino’s workers to deliver 50 large pizzas, half of them cheese pizzas and half of them pepperoni, for surprised and grateful clients.

Treacy and his crew had delivered 50 pizzas the day before, and had plans to deliver another 50 in two days, with still more the following week. He also had made arrangements with a Domino’s franchise owner in the southern Maryland counties of the Washington Archdiocese to deliver a big batch of pizzas to a Catholic Charities food bank in Waldorf, Maryland.

For Treacy, who has been with Domino’s since 1988, a 9:30 a.m. delivery wasn’t his earliest ever — he remembered a call from the White House for multiple pizzas to be brought by 7 a.m. the day of the annual Easter egg roll — but this is something he is glad to do, he and his wife have helped Catholic Charities initiatives in the past. “You can’t say no to Father John” Enzler, the monsignor who heads up Catholic Charities in the archdiocese.

With 32 years in the pizza business, “there’s never been anything like this,” Treacy said, as he is striving to keep his shops open yet also keep both his workers and customers safe. He added Domino’s was rolling out nationwide a new system where pizzas would be delivered to the customer’s cars once they’re in the Domino’s parking lot.

It’s much the same situation for Catholic Charities DC, except that not all of its clients have cars — or even masks. An employee periodically goes out to the line and gives masks to those without one.

Tara Arras, chief development officer for Catholic Charities DC, told Catholic News Service that “crisis mode” for food distribution went into effect “almost immediately. We had a meeting March 13 where we recognized we were going to have to change things, and the next week we did,” stepping up efforts and redirecting resources to meet real-time needs.

About those resources: The demand has outstripped contributions. SHARE Food has contributed food, and Arras remarked that relationship will continue, but that hasn’t filled all the gaps. “We’ve been sending our people to Costco, BJ’s Wholesale Club, Giant and Safeway (the two major grocery chains in the Washington area) — Walmart when we have to — to buy groceries,” she said.

Catholic Charities donors, Arras added, have also been directed to an Amazon “wish list” to buy foodstuffs that can be delivered to the food bank. The link is https://amzn.to/356uW96.

Well into the second month of the World Health Organization’s pandemic declaration, the need has not abated.

Arras talked about going into one district in a neighboring county where 70% of the adults are not U.S. citizens. “The people there work hourly, daily, and that work has been drying up,” she said, adding that a strategy had not yet been finalized to provide food aid. “But we will be there.”

NEXT: Religious education continues in different format during pandemic