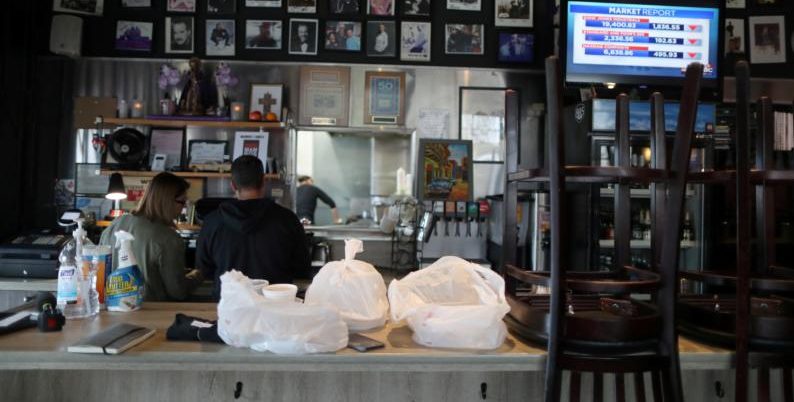 A restaurant in Glendale, Calif., is seen March 18, 2020, during the coronavirus pandemic. (CNS photo/Lucy Nicholson, Reuters)

WASHINGTON (CNS) — After 11 years of U.S. economic growth, the statistics are staggering.

All of the jobs added in the U.S. economy since Donald Trump assumed the presidency in 2017 are now effectively gone. And, depending on whether there’s another round of bad news or some thread of hope to cling to by Wall Street traders, all of the stock market gains since January 2017 are gone, too. And fast.

The March unemployment figures released April 3 go through only March 12 — the day after the National Basketball Association suspended its season, with pro hockey and baseball following suit — at that time the most shocking signal yet that these were new and highly uncertain times.

Even so, the climb from a 3.5% unemployment rate in February to 4.4% in March, representing a loss of 701,000 jobs, does not reflect all that has happened in the following weeks: spiking COVID-19 positive tests results — and death rates; restrictions on public gatherings and the issuance of “stay at home” orders; the closure of shops, stores and restaurants, throwing as-yet-untold numbers of people out of work; and people who do have money having far fewer places, and inclinations, to spend it.

The May jobs report, due May 8, will take into account all that has happened with jobs and the economy into mid-April, said Elise Gould, a senior economist with the Economic Policy Institute.

It also will show which sectors of the economy were hit hardest, as well as the demographic groups affected most severely by the pandemic-related economic stall.

Figures from Washington state, the first epicenter of the coronavirus outbreak, while themselves preliminary, give a clue to what the rest of the nation could expect. Three job categories suffered month-to-month double-digit job losses: accommodation and food services, 16.5%; arts, entertainment and recreation, 11.3%; and “other services” outside of public administration, 10.9%.

The $2 trillion stimulus package hammered out by Congress and signed into law by Trump in late March is “not stimulus so much as relief and recovery,” Gould said. “What we need to do right now is ease people’s pain … ease people’s pain from these job losses.”

She added, “People are losing their job and they’re not going to be able to put food on the table, this CARES (Coronavirus Aid, Relief and Economic Security) Act, what it does, it expands unemployment insurance so that more people can get it for a more expansive number of reasons related to COVID-19.”

Gould said more action will need to be taken in Washington to get the country through and past the pandemic.

Clayton Sinyai, executive director of the Catholic Labor Network, said: “It’s probably a good generalization” that those who have the least have thus far been hurt the most by the sudden economic upheavals.

For Sinyai, it’s personal. “My brother-in-law is a cab driver in Honolulu and is an immigrant. He is trying to figure out how to navigate the system,” he said. “It’s really challenging for someone who does not have a lot of experience accessing benefits or things like that.”

The Catholic Labor Network has been working with food service workers at the airports serving the Washington area. “They’ve all been furloughed or something similar to that. Restaurants are in the same category,” Sinyai said. “Those of us who are able to continue working are disproportionately in white-collar jobs and able to work online and not working with our hands — and not sitting on our hands and hoping to get the relief Congress and the taxpayers have just offered.”

At Georgetown University in Washington, the contractor that employs food service workers sent them home without pay when Georgetown closed the campus. After complaints to university leadership by the union representing those workers and by students, a deal was worked out that paid workers until the end of the term.

“That was at some expense to Georgetown itself,” said Sinyai, noting the university also had rebated dorm-dwelling students the unused portion of their dorm charges.

In the Archdiocese of Los Angeles, the nation’s largest diocese, “where we can, we will continue to have folks working,” said Annabelle Baltierra, senior director of human resources. “As this continues to go on, we don’t have donations coming in, although our bishop (Archbishop Jose H. Gomez) is encouraging, for example, our parishes talking with their donors about continuing, our parents continuing to pay their tuition. Resources will make it doable.”

Next steps? “Then we start thinking about reducing staff hours across the board. The bishop encouraged the clergy to set an example and consider taking a cut in their salary,” Baltierra said, although they should not go below the minimum wage in doing so.

“A last resort,” she added, “is to have our employees go on furlough, which would mean they wouldn’t have any income, but they would be able to utilize their vacation time until the government passes another emergency bill.”

The National Conference on Catechetical Leadership had to call off its annual conference in Dubuque, Iowa, even though its bylaws mandate an annual meeting. “We didn’t realize how much the Spirit would force us to look at who we are and how we do things,” said executive director Margaret Matijasevic, noting that was part of the conference’s theme. “It forced us to do that quicker than we thought.”

The future requires a longer-range look than merely rescheduling a meeting, according to Matijasevic.

“What other options we move into, it would be completely shifting our business model,” she said. “We really have no measurement of engagement or buy-in for anything that we consider moving into. There will be some loss, some loss of our identity as an organization, which we’ve already been looking at” as a result of a leadership crisis in the church, she added.

Membership dues are one source of revenue for many national Catholic organizations. For the NCCL, it lost members who were laid off when diocesan and parish revenues were reduced following a fresh wave of revelations of clerical sexual abuse; Matijasevic told Catholic News Service more could be let go if contributions wither during the pandemic. Another revenue source is convention and conference fees. NCCL’s convention is over before it began; strike two.

“The other main revenue stream for many Catholic organizations is their investments. That becomes a point of crisis for some of us, as it is for many dioceses,” Matijasevic said. “Most nonprofits are using that as their supplemental reserve.”

She added, “Now you’re in the crisis point where you’re losing your main business model, which is based on the parish business model — and the same thing is happening with many national organizations that have mimicked that model.” And if reserves are compromised because of investments in a tailspin, “that’s going got hit us tremendously,” Matijasevic said.

“We had no concept that COVID-19 would be coming down the pike and force us to refocus who we really are,” she added. The challenge comes in “how to be pastoral in that, but taking a good hard look at how we do business,” Matijasevic said. “We’d better rethink it.”