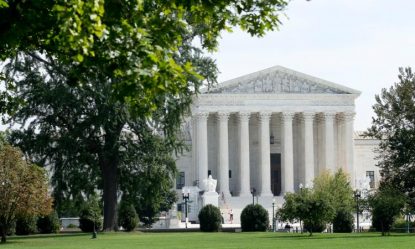 The U.S. Supreme Court in Washington is seen in this 2017 file photo. The court announced April 13, 2020, it will conduct 10 oral arguments by teleconference in May. Among the arguments it will hear are cases involving the Little Sisters of the Poor and California Catholic schools. (CNS photo/Tyler Orsburn)

WASHINGTON (CNS) — For the first time in its history, the Supreme Court announced April 13 it will conduct 10 oral arguments by teleconference in May. Among the arguments it will hear are cases involving the Little Sisters of the Poor and California Catholic schools.

The court also will also arguments in a case on access to President Donald Trump’s financial records.

Specific dates have not been announced for these cases, but the court said the arguments will take place between May 4-6 and May 11-13.

In announcing the decision to proceed with some of the arguments already postponed due to the stay-at-home guidelines in place with the coronavirus, the court said in a news release that it was “keeping with public health guidance in response to COVID-19” and that “the justices and counsel will all participate remotely.”

“The court anticipates providing a live audio feed of these arguments to news media,” the release said.

The last time the justices met publicly was March 9. They have issued opinions on the court’s website and met by teleconference calls.

The court had initially been scheduled to hear arguments April 29 in the case Little Sisters of the Poor v. Commonwealth of Pennsylvania. The sisters were returning to the high court because of state challenges to the Trump administration’s decision to allow religious employers to opt out of the Affordable Health Care’s contraceptive mandate.

The sisters are represented by Becket, a nonprofit religious liberty law firm, which also is representing Catholic schools in a case that was initially scheduled for April 1 oral arguments before it was postponed.

The combined cases, Our Lady of Guadalupe School v. Morrissey-Berru and St. James School v. Biel, center on two California Catholic schools that were sued by the teachers they had fired who claimed they had been victims of job discrimination. The schools have stressed that they should be able to choose who teaches the faith to their students.

Mark Rienzi, Becket president, said in an April 13 statement emailed to Catholic News Service that the firm was glad the court “recognized the importance of these cases by setting them for argument this term despite the unique circumstances caused by the COVID-19 pandemic.”

He said the justices’ plan to hear these cases by teleconference will “keep everyone safe while ensuring that the wheels of justice continue to turn.”

PREVIOUS: ‘Our faith needs to kick in’ amid pandemic crisis, Cardinal Dolan says

NEXT: Cars line up for blocks as Minnesota bishops give Easter blessing