Amid pandemic, politicians must put country over party, pope says 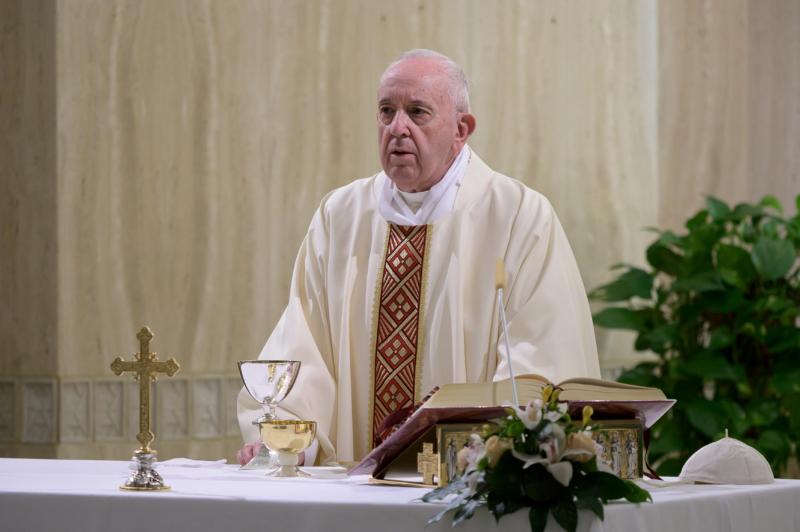 Pope Francis celebrates Mass in the chapel of his Vatican residence, the Domus Sanctae Marthae, April 20, 2020. The pope offered the Mass for politicians and prayed that political parties "may seek together the good of the country and not the good of their own party" during the COVID-19 pandemic. (CNS photo/Vatican Media)

VATICAN CITY (CNS) — Pope Francis began his morning Mass by praying for political leaders and calling on them to put the welfare of their people above their party’s interests during the coronavirus pandemic.

“We pray today for the men and women who have a vocation to politics; politics is a high form of charity,” he said April 20, adding a prayer “for the political parties of various countries so that, in this moment of pandemic, they may seek together the good of the country and not the good of their own party.”

In his homily at the Mass, the pope reflected on the day’s Gospel reading from St. John in which Nicodemus, a Pharisee, tells Jesus that he believes he is “a teacher who has come from God for no one can do these signs that you are doing unless God is with him.”

Jesus’ response that “unless one is born from above, he cannot see the Kingdom of God,” confuses Nicodemus who took the response literally, the pope explained.

Yet, Jesus’ answer is a call for Nicodemus to “be born of Spirit,” which is unpredictable like the wind but makes a person free, he said.

“A person who lets himself or herself to be carried from one side to another by the Holy Spirit — this is the freedom of the Spirit,” the pope said. “Whoever does this is a docile person, and here we are talking about docility to the Spirit.”

While obeying the Ten Commandments is important, it is not what defines a good Christian, he added. A good Christian allows “the Spirit to enter you and take you where he wants you.”

Pope Francis also spoke about the day’s first reading in which Peter and John visited the Christian community following their release from interrogation by the chief priests and elders.

Although the community was frightened by what they were told, he added, “they did not take precautionary measures” but instead prayed and allowed “the Spirit to tell them what to do.”

“They raised their voices to God saying, ‘Lord!’ — this beautiful prayer in a dark moment, a moment when they have to make decisions and don’t know what to do,” he said. “They want to be born of the Spirit; they open their hearts to the Spirit that he would be the one to tell them” what to do.

“How does one prepare one to be born again?” Pope Francis asked. “Through prayer! Prayer is what opens the door to the Spirit and gives us this freedom, this frankness, this courage of the Holy Spirit. You will never know where it will take you, but it is the Spirit.”