As lockdowns end, pope prays for obedience, prudence in behavior 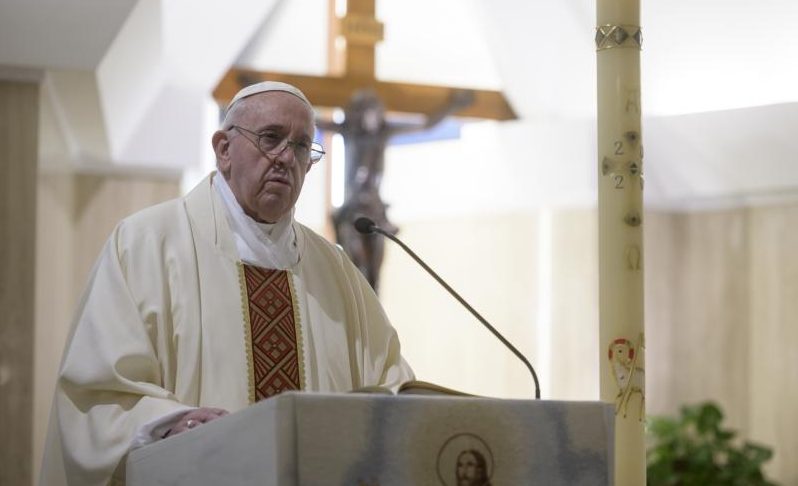 Pope Francis gives his homily during Mass April 28, 2020, in the chapel of his Vatican residence, the Domus Sanctae Marthae. (CNS photo/Vatican Media)

And, in his homily at the Mass April 28, he prayed that people would be prudent in their judgment of others, refraining from gossip and not believing lies and “fake news” about entire categories of people.

“At this time, when we are beginning to receive instructions for coming out of quarantine, we pray that the Lord would give his people — all of us — the grace of prudence and obedience to the instructions so that the pandemic does not return,” he said at the beginning of the Mass in the chapel of the Domus Sanctae Marthae.

The pope’s comments came two days after the Italian bishops expressed concern that the Italian government’s plan for easing the pandemic lockdown in stages through June 1 had not made provision for the resumption of public Masses. The prime minister promised to study the issue to see if there were ways to do so safely.

In his homily, Pope Francis focused on the account from the Acts of the Apostles about the martyrdom of St. Stephen.

The story is “brutally” simple, the pope said. “The doctors of the law could not tolerate the clarity of his doctrine and, as soon as he proclaimed it, they went to ask if people would say that they had heard Stephen blaspheme against God, against the law. And after that, they pounce on him and stone him. That simple.”

The dynamic is not new, he said. The Old Testament recounts similar stories about attacks on Susanna and Naboth and about Haman’s persecution of the Israelites.

The stories are filled with “false news, lies that fire up the people and make them demand justice. It’s a lynching, a real lynching,” the pope said.

Often the lies are taken a step further, he said. In biblical times and still today, those making the false accusations and whipping up the mob then turn to a judge to get an official stamp of approval for unjust judgments, like when the chief priests went to Pilate to get him to condemn Jesus.

The same thing happened to Asia Bibi in Pakistan, the pope said. She spent eight years on death row after a conviction in 2010 based on insubstantial evidence. She had been accused of blasphemy in a dispute over a cup of water with a Muslim co-worker on a farm.

On a whole other level, he said, the same process of stirring up hatred and creating an “avalanche” of lies led to the Shoah, the slaughter of 6 million Jews by the Nazis during World War II.

“The Shoah was a case of this kind,” he said. “An opinion against a people was created” and repeated so often that it seemed “normal.” People responded by saying, “Yes, yes, they should be killed,” he said.

“May the Lord help us to be just in our judgments and to not start or follow this massive condemnation that gossiping provokes,” he prayed.