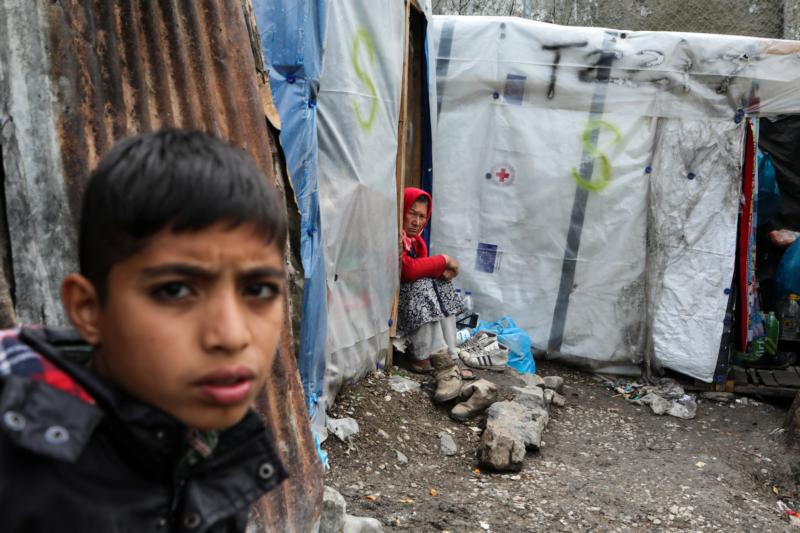 A migrant woman and child are seen outside their tent in a makeshift camp on the island of Lesbos, Greece, April 2, 2020, during the COVID-19 pandemic. (CNS photo/Elias Marcou, Reuters)

VATICAN CITY (CNS) — Pope Francis and his COVID-19 response commission want to see religious, economic and social life resume, but they question the wisdom of hoping for a return to a “normal” that left so many people struggling.

“Either we are going to be remembered as the most irresponsible generation in the history of the planet, or this crisis will provide a window of opportunity to become the generation that regenerates a healthy society with healthy people, with healthy institutions and with a healthy planet,” said Father Augusto Zampini, recently named adjunct secretary of the Dicastery for Promoting Integral Human Development.

“Going back to business as usual,” he said, means continuing to support an economy based on consumption and the accumulation of wealth, which results in “unhealthy people, unhealthy institutions and a very sick planet.”

Pope Francis is hoping for something different, which is why he formed the COVID-19 response commission in early April.

Led by Cardinal Peter Turkson, president of the integral human development dicastery, the commission has five task forces looking at everything from the immediate needs of the church in the world’s poorest nations to opportunities to lobby governments and international organizations for policies that would create an economy that is stronger for everyone and better for the planet.

The commission involves about 40 or 50 “core members,” Father Zampini said, but each of them is working with a network of Catholic aid and relief agencies, bishops’ conferences, academics, researchers and think tanks.

Over the course of more than 100 years, popes and theologians have developed an articulated body of Catholic social teaching. The teaching applies Gospel values to economic, political and social activity. It highlights the sacredness of life and the dignity of the human person, the need for solidarity and social safety nets, the importance of labor and the rights of workers, safeguarding the environment and a vision of the economy that is based on creating well-being for all and not wealth for just a few.

That teaching is at the heart of the reflection of the second task force, Father Zampini’s group, which is working with the Pontifical Academy of Sciences and the Pontifical Academy for Life studying the pandemic itself and “reflecting on the post-COVID-19 world, particularly in the spheres of the environment, the economy, labor, health care, politics, communications and security.”

The group has been working and meeting virtually for four weeks already, the priest said April 28. They began with health care in the world’s poorest countries, and Caritas Internationalis has approved eight projects for funding.

They have had long discussions on “food security” and the need to protect small farms, promote local sourcing and find other alternatives to disrupted transportation routes.

And they have focused on the foreign debt of the world’s poorest countries, joining the plea of Pope Francis and a wide variety of leaders in calling for debt relief — either through the suspension of payments or an outright forgiveness of debt.

But, he noted, in response to the coronavirus, over the course of a few short weeks governments around the world ordered an almost complete shutdown of social and economic life; they knew the dire impact it would have on their gross domestic products, but they decided the life and health of their people were more important.

“How many times have we heard, ‘No, we have to be realistic,'” Father Zampini said, but the lockdowns and their effectiveness have shown that “radical change is possible” and that it does not have to be gradual.

The other lesson the pandemic is driving home is that there is no safety in selfishness, he said. Temporary travel bans have slowed the spread of the coronavirus, but as long as it is present in one nation, all nations are at risk.

But Father Zampini has his own take on the “we’re all in this together” refrain.

An accurate analogy, he said, is “we are all in the same storm, but we’re in different boats.”

The priest said he and anyone else with a home, an income and food are on a “big boat,” and while they may get a bit seasick and be forced to change their daily routine during the storm, “you don’t fear that you’re going to die.”

“But other people are in tiny little boats,” he said, some with small motors, some with oars and some just completely at the whim of the giant waves.

The elderly, the immuno-compromised, day laborers, migrants and refugees, people in abusive relationships and the extremely poor “are desperate, not only because of the virus, but because of the social situation,” he said. Not only are they worried about the future, they struggle to survive during a lockdown.

While people on the big boats are saying, “Oh, I’m bored” with being in lockdown, he said, “some people wish that they could be bored.”

PREVIOUS: ‘No duty’ to boycott vaccine made from abortion, ethicist says