Peru urged to guard needs of indigenous during pandemic 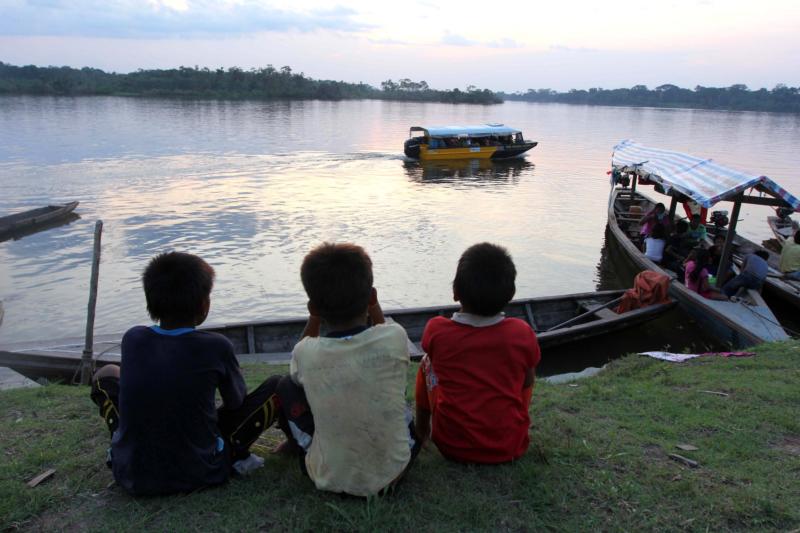 Kukama boys watch boats on the Amazon's Maranon River near Dos de Mayo in Peru's Loreto region. As the 2020 COVID-19 pandemic increasingly exposes fault lines between the rich and poor, the eight bishops of Peru's Amazonian region have urged the government to pay particular attention to the needs of indigenous people. (CNS photo/Barbara Fraser)

LIMA, Peru (CNS) — As the COVID-19 pandemic increasingly exposes fault lines between the rich and poor, the eight bishops of Peru’s Amazonian region have urged the government to pay particular attention to the needs of indigenous people.

“Social inequalities leave the weakest unprotected, making them more vulnerable to COVID-19,” the bishops wrote in an April 22 statement. “These deficiencies are exacerbated when they are suffered by the indigenous people of our Amazonia, the population that is most defenseless in the face of this pandemic.”

The message came as some 450 Shipibo people from Peru’s central Amazonian Ucayali region began walking northward from towns on Peru’s southern coast, where they had been doing seasonal farm labor. Their goal is to reach their home communities hundreds of miles away on the other side of the Andes Mountains.

Peru has been on lockdown since March 16, with residents throughout the country allowed out only to buy food or medicine or for medical emergencies.

But many Peruvians work in very low-paying day labor, living on what they earn from day to day.

The government provided vouchers of about $200 to more than 1 million people during the first month of the quarantine, but that still left millions without assistance.

“We recognize the great effort that the government is making to grant assistance to the neediest population,” the bishops wrote. “Nevertheless, we see that many poor people have not benefited because they are not included” on official government lists.

Those include people who migrated from the Amazon region or the Andean highlands to Lima and other coastal cities during the Southern Hemisphere summer for temporary work so they could buy clothes and school supplies for the school year, which began in March.

With the country on lockdown and domestic travel halted, they had no way to return home. When they could no longer work because of the quarantine, many could no longer afford food or were evicted from the rooms they were renting.

In mid-April, hundreds of people left Lima, carrying packs and small children and walking along the coastal highway or the road leading to the central Andes.

“We urge the regional governments of the Amazon to place special emphasis on helping (migrants) return to their communities,” the bishops wrote.

The government has scrambled to provide transportation, but is focusing on people who were caught in Lima by the quarantine and have made no provisions for migrants like the Shipibo farm workers, Bishop Martin Quijano of Pucallpa, the capital of the Ucayali region, told Catholic News Service.

“There is no transportation or other assistance for them,” he said, adding that government officials in Ucayali seemed “nervous” about the problems caused by the pandemic. People who return to their home regions should remain in quarantine for 14 days before going to their homes, but quarantine facilities are lacking.

In various parts of the country, the number of COVID-19 cases has exceeded the capacity of hospitals and health centers and patients must sleep in wheelchairs in corridors or lie on mats on the floor.

The bishops noted that indigenous people who have migrated from rural villages to Amazonian cities are at greatest risk.

“They live in crowded conditions on the peripheries of cities and are victims of exclusion by the government,” the bishops wrote.

The houses often lack sewer service and running water, problems “that are made more evident by this pandemic,” they wrote.

In rural parts of the Amazon, some indigenous communities have barred outsiders from entering in an effort to keep the pandemic at bay. In others, families are leaving the main part of their communities and taking refuge in the forest, planning to hunt, gather forest plants and tend small gardens for food until the pandemic passes.

Some semi-nomadic groups living in the heavily forested region along the border between Peru and Brazil have done that for generations. They are at particular risk because, while no one is immune to COVID-19, they also lack resistance to illnesses such as flu or the common cold.

“We are especially concerned by the extreme vulnerability of indigenous people in voluntary isolation and initial contact, because if this pandemic reached their territories, it would have disastrous consequences that would jeopardize their very survival,” the bishops wrote.

The plight of these vulnerable populations has worried many in the church, including Pope Francis. On April 25, the pope called Archbishop Leonardo Steiner of Manaus and expressed “his concern for the indigenous, the rural population who live along the rivers and the poor.” Pope Francis asked what the church was doing to help these people and expressed his solidarity to the people of the Amazon region.

“The pope, at the end, thanked us once again (for our actions), said that he prays for all of us and that he sends a special blessing to the Amazon. We are deeply grateful to Pope Francis for his paternal-ecclesial gesture,” said the archbishop.

Amazonas state is one of the most affected by the COVID-19 pandemic in Brazil, with 304 confirmed deaths and 3,833 infections as of April 25. Manaus made international headlines after reports showed the city has needed to open mass graves to bury an increasing number of dead.

Although the territories the indigenous inhabit are officially protected, chance encounters occur. A man fishing near his community in a remote part of Peru’s southern Madre de Dios region was killed in mid-April by an arrow shot by a member of an isolated group.

Loggers also sometimes work in or near areas set aside for isolated groups. A logger working near an area where indigenous organizations have requested protection for semi-nomadic groups was diagnosed as having COVID-19, leading to concern about the disease spreading into remote areas.

The bishops called for the government to work with indigenous and grassroots organizations to provide food, personal hygiene and cleaning products and to devise an emergency health strategy appropriate for indigenous and rural Amazonians, taking into account the region’s cultural diversity and indigenous knowledge.

“May Mary, the mother of life, infect us with the hope,” they wrote, “so that together we can survive this test.”

PREVIOUS: Vietnamese pray to Our Lady of La Vang via livestream Mass

NEXT: Mexican bishops announce ‘families without hunger’ plan during pandemic