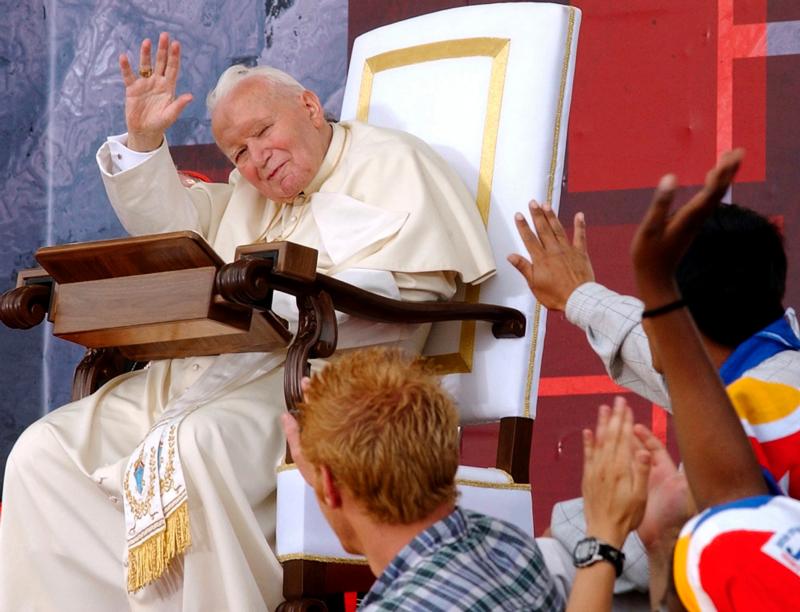 In one of former papal photographer Arturo Mari’s famous photos, he shows Pope John Paul II celebrating his final international World Youth Day in Toronto in 2002. April 2, 2020, is the 15th anniversary of the pope’s death in 2005. (CNS photo/Arturo Mari)

He had a philosopher’s intellect, a pilgrim’s spiritual intensity and an actor’s flair for the dramatic, making him one of the most forceful moral leaders of the modern age.

An estimated 4 million people paid their respects over several days to the pope who had led the universal church for more than 26 years. His funeral April 8 was broadcast around the world and drew more than a million people, including kings, queens, presidents and prime ministers, and representatives of many faiths.

Seeming to respond to the “Santo subito!” (“Sainthood now!”) banners that were held aloft during his funeral in St. Peter’s Square, his successors — retired Pope Benedict XVI and Pope Francis — respectively beatified and canonized him, after waiving the normal five-year waiting period for the introduction of his sainthood cause.

The first non-Italian pope in 455 years, St. John Paul became a spiritual protagonist in two global transitions: the fall of European communism, which began in his native Poland in 1989, and the passage to the third millennium of Christianity.

Whether at home or on the road, he aimed to be the church’s most active evangelizer, trying to open every corner of human society to Christian values.

In fact, he laid out his vision of the church’s future and called for a “new sense of mission” to bring Gospel values into every area of social and economic life with a landmark document, the apostolic letter “Novo Millennio Ineunte” (“At the Beginning of the New Millennium”).

His social justice encyclicals also made a huge impact, addressing the moral dimensions of human labor, the widening gap between rich and poor and the shortcomings of the free-market system. At the pope’s request, the Vatican published an exhaustive compendium of social teachings in 2004.

Within the church, the pope was just as vigorous and no less controversial. He disciplined dissenting theologians, excommunicated self-styled “traditionalists,” and upheld church teaching against artificial birth control. At the same time, he pushed Catholic social teaching into relatively new areas such as bioethics, international economics, racism and ecology.

He led the church through soul-searching events during the Great Jubilee of the Year 2000, fulfilling a dream of his pontificate. His long-awaited pilgrimage to the Holy Land that year took him to the roots of the faith and dramatically illustrated the church’s improved relations with Jews. He also presided over an unprecedented public apology for the sins of Christians during darker chapters of church history, such as the Inquisition and the Crusades.

The pope approved a universal catechism as one remedy for doctrinal ambiguity. He also pushed church positions further into the public forum. In the 1990s, he urged the world’s bishops to step up their fight against abortion and euthanasia, saying the practices amounted to a modern-day “slaughter of the innocents.” His sharpened critique of these and other “anti-family” policies helped make him Time magazine’s choice for Man of the Year in 1994.

In his later years, the pope moved with difficulty, tired easily and was less expressive, all symptoms of the nervous system disorder of Parkinson’s disease. By the time he celebrated his 25th anniversary in October 2003, aides had to wheel him on a chair and read his speeches for him. Yet he pushed himself to the limits of his physical capabilities, convinced that such suffering was itself a form of spiritual leadership.

With the third-longest pontificate in church history, St. John Paul died at the age of 84 on the vigil of Divine Mercy Sunday. Divine Mercy Sunday had special significance for the pope, who made it a church-wide feast day to be celebrated a week after Easter.

Pope Benedict beatified him on Divine Mercy Sunday, May 1, 2011, and Pope Francis canonized him on the same feast day, April 27, 2014. 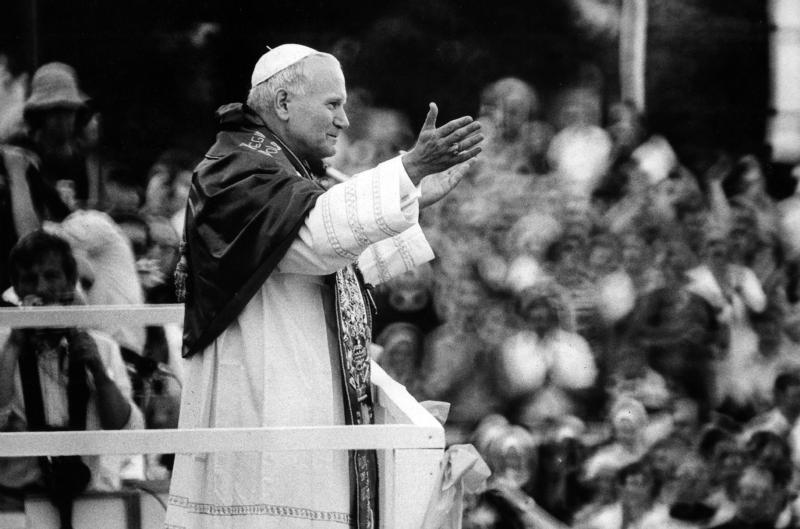 St. John Paul II greets throngs of Poles waiting for a glimpse of their native son at the monastery of Jasna Gora in Czestochowa during his 1979 trip to Poland. April 2, 2020, is the 15th anniversary of the pope’s death in 2005. (CNS photo/Chris Niedenthal)

PREVIOUS: Latin America’s bishops call for consecration to Our Lady of Guadalupe

NEXT: St. John Paul showed how to face suffering by embracing God, Mary