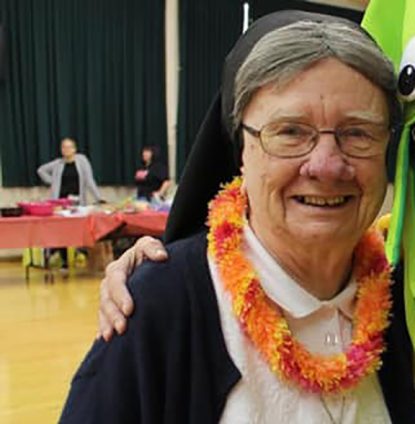 A Northeast Philadelphia parish is mourning the loss of its school’s vice principal, who succumbed to COVID-19 after a brief hospitalization.

IHM Sister Irene Loretta Cassady of St. Matthew Parish School “passed from this world to eternal life late this morning,” according to pastor Father Patrick Welsh, who announced the sister’s death in a May 7 video message posted to the parish’s Facebook page.

For several days, parents, teachers and students had rallied in support of the beloved school leader, who had mentored several fellow teachers and administrators over the course of her 65-year career.

In an Easter video message recorded for the school’s children, Sister Irene had “said with certainty that she knew God had a plan for us during this time,” said Father Welsh.

Sister Irene’s last video message will be uploaded to the parish’s Facebook page by tomorrow, while the parish’s bells were tolled at 7 pm this evening in her honor.

Although the observance was to begin with a single “mournful toll,” Father Welsh said, it would “conclude with all of the bells ringing, a joyful toll.”

“I think Sister Irene would have wanted it that way,” he said.

(Watch a video from Father Patrick Welsh, pastor of St. Matthew Parish in Philadelphia, on the passing of IHM Sister Irene Loretta Cassady, vice principal of the parish’s school.)

Speaking to CatholicPhilly.com by phone, Father Welsh said that the parish’s students “adored” Sister Irene, who often “ran interference” on their behalf in disciplinary matters.

“I can be like a dad wagging my finger, and she was just like the mom, calming me down,” he recalled.

She also brought a comic twist to the school’s morning announcements, which she occasionally handled in the principal’s absence.

“It was like must-see TV, just classic,” said Father Welsh. “You never knew what she was going to do.”

Amid the pandemic, she continued to “send math work to the kids” through the mail, he added.

Father Welsh also advised that there is a possibility that Sister Irene’s funeral Mass, details for which are as yet unavailable, may be livestreamed.

In the meantime, parishioners and school families are “certainly very saddened,” he said, but also confident that their friend and educator is with the Lord she diligently served.

“These are people of faith, and they know her, and what she believed,” said Father Welsh. “And she lived that.”