At Catholic colleges, no pomp but a lot of circumstance this year 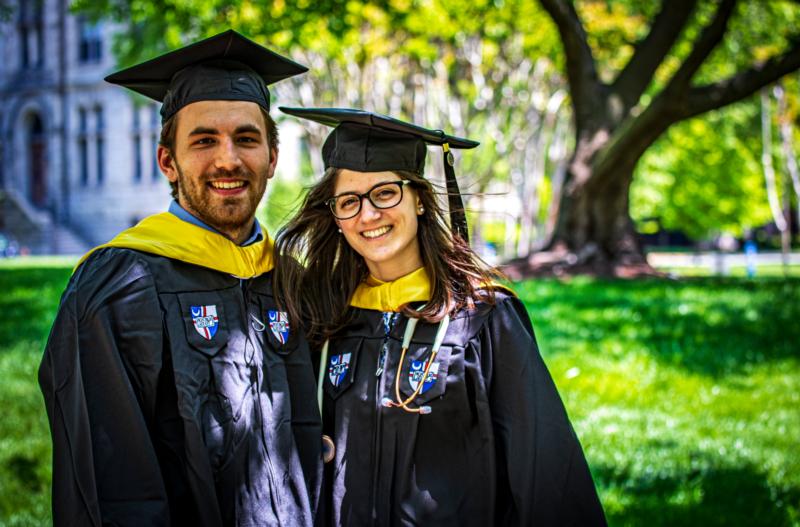 Nicholas Trotto, 22, of Glendora, N.J., and Sara Affleck, 22, of Huntingdon Valley, Pa., both soon to be graduates of The Catholic University of America, donned their cap and gowns and posed for commencement photos on the school's Washington campus May 13, 2020. Like other Catholic colleges throughout the U.S., CUA plans to hold a virtual graduation through an online platform May 16, 2020, amid the COVID-19 pandemic. (CNS photo/Chaz Muth)

WASHINGTON (CNS) — Graduation ceremonies, the hallowed traditions of colleges and universities around the country, are as upended — but also marked with creativity — as school lectures and seminars have been since mid-March.

The milestone events, taking place throughout the month of May, have moved from stadiums or arenas to the now ubiquitous teleconference formats with graduates linking to these ceremonies from their homes either by themselves or with families and friends and often with one tradition still in place: wearing the graduation cap and gown.

Many schools have promised to also honor their graduates publicly at a later date, but as with everything else in this pandemic, no specific dates can be given. Schools also have taken extra steps to highlight graduates with videos posted on school websites or pages online where people can post congratulatory messages.

“It was not the graduation we all expected, but it was a delightful celebration,” said Jean Mitchell, a parishioner at the Madeline Parish in Portland, Oregon, and grandmother of Olivia Mitchell, a 2020 graduate of the University of Portland, a school affiliated with the Congregation of Holy Cross.

Olivia, vice president of the university’s student government, sat in her family’s front room in Hood River, Oregon, lined with purple balloons to watch the livestreamed ceremony May 3 that included speakers, singers and each graduate’s name read aloud with a photo shown.

And across the country, during the online graduation ceremonies for Trinity Washington University May 13, a similar message of how this day was very different from expectations didn’t even need to be said; it was obvious by the setting alone with graduates and faculty members aligned in squares on the computer screen.

At the university’s first ceremony for the College of Arts and Sciences, the emphasis was not on how different the ceremony was, once all the unmuting of students occurred, but on the hard work and resiliency these students have shown throughout the year and especially in recent months. The graduates, who were also given a chance to speak, emphasized the challenges they faced throughout their time in school; they also thanked their friends and the school community and expressed optimism about moving forward.

One student, sitting with her parents for the ceremony in front of a congratulations banner, said she was the first in her family to get a college degree and noted that her college education shaped her in ways she would never have imagined.

Another thanked the school leaders “for their support for the undocumented community.” Trinity Washington University has 13 “Dreamers” this year — students who are participants in the 2012 program Deferred Action for Childhood Arrivals, or DACA, which enables qualified adults who arrived in the U.S. as children without legal documentation to work or attend college without the threat of deportation.

The virtual graduations didn’t avoid mention of the pandemic that prevented usual graduation ceremonies since crowds are not allowed with current restrictions to curb the disease’s spread.

Holy Cross Father Jim Gallagher, head of campus ministry at the University of Portland, started the ceremony with a prayer that acknowledged the world’s beauty and complexity but also the current “struggle, hardship, inequity and tragedy.” In this unusual time, he said, it is possible to thank God for “gifts we received along the way.”

A poignant highlight of the school’s ceremony was when the university’s dean of the School of Nursing announced that 175 graduates were now ready to enter the workforce.

During the May 10 online commencement services for Assumption College in Worcester, Massachusetts — livestreamed from the university’s chapel — the school’s president, Francesco Cesareo, acknowledged the unprecedented challenges faced by the class of 2020.

“You have had to confront adversity and the unexpected,” he told them, adding they should be proud of how they adapted and showed “resilience, strength and ability to overcome challenging times.” He said their education taught them to “view bad things in life as a challenge to be overcome rather than a crisis to be endured.”

In April, when many college leaders realized typical graduation ceremonies would not be feasible, they reached out to their school communities with apologies and an acknowledgement the situation was both unusual and very unpredictable.

When John Garvey, president of The Catholic University of America in Washington, announced changed graduation plans in April, he said the “class of 2020 will always be remembered with a certain irony. Exceptionally clear vision is 20/20. We say hindsight is 20/20 to imply that you should have seen something coming. Yet here we are, months from your graduation, and nothing is clear, and nobody saw the coronavirus coming.”

The university is livestreaming its graduation ceremony May 16 and hopes to have a public ceremony at a later date.

School leaders are pointing out that the lessons these graduates learned this year won’t be forgotten, but they also require a response.

Trinity Washington University’s president, Patricia McGuire, summed this up May 13 by telling graduates that the education they received demands they “break free from the emotional and intellectual quarantine to step forward as leaders with the courage and fortitude to take our families and communities, places of work and social institutions to new and safer places for the future.”

“We are not just receivers of the new social compacts of the post-pandemic world, ” she told the group watching her on their computer screens. “We are the creators of the ideas, the methods and solutions for how we will emerge from the crisis in a way that makes our communities and institutions stronger, more forward-thinking, more resilient and more equitable for all to participate in the new economy that will also come after this catastrophe.”

After she declared they were graduates of the university, the students applauded, teachers urged them to at least virtually celebrate and no one, it seemed, wanted to “leave the meeting.”

Contributing to this report was Ed Langlois, managing editor of the Catholic Sentinel, newspaper of the Archdiocese of Portland.

NEXT: Urgency in pandemic response can apply to addressing climate change