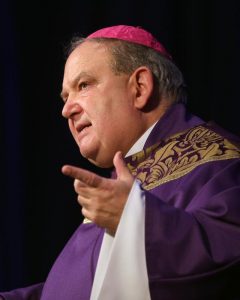 Archbishop Bernard A. Hebda of St. Paul and Minneapolis is seen Nov. 12, 2019. Catholic churches in Minnesota reopened for the public celebration of Mass May 27, 2020, but not before the state’s bishops took a bold stance to assert that churches were as important as bars, restaurants and hair salons. (CNS photo/Bob Roller)

CLEVELAND (CNS) — Catholic churches in Minnesota reopened for the public celebration of Mass May 27, but not before the state’s bishops took a bold stance to assert that churches were as important as bars, restaurants and hair salons.

The bishops reasoned they, and no one else, should ultimately determine when Mass and the celebration of the sacraments could resume.

So May 20 when Archbishop Bernard A. Hebda of St. Paul and Minneapolis wrote to Minnesota Gov. Tim Walz telling him that public Masses would resume, the governor took notice.

The letter followed weeks of dialogue between church leaders and the governor in an effort to reach consensus on reopening houses of worship. It raised concerns that the churches were being discriminated against in the governor’s May 13 plan to reopen the state by placing churches at the back of the line for consideration.

Within days, Walz and the bishops agreed that Masses could restart May 27. Walz announced May 23 a revised plan to allow religious services to resume as long as the gatherings do not exceed 25% of a building’s capacity and social distancing was practiced.

“Decisions about reopening were being made that prioritized economic considerations and material well-being ahead of spiritual well-being,” Jason Adkins, executive director of the Minnesota Catholic Conference, which represents the state’s bishops on public policy matters, wrote in an email to Catholic News Service.

“They (state officials) also exhibited a lack of due consideration given to what communities of faith contribute to the well-being of our state. That prompted a sense among some Christian clergy that we needed to be pro-active in offering our own plan for responsible reopening and move it forward,” Adkins said.

“The bishops instead decided to open our doors to the community just like other commercial actors were planning and allowed to do (malls, retail shops, outdoor bars, casinos), and if Gov. Walz or other public officials wanted to stop us, they would look unreasonable and discriminatory. The church was merely seeking equal treatment in the reopening process,” Adkins wrote.

Attorney Diana Verm of Becket, a nonprofit religious liberty law firm based in Washington, worked with the bishops in the negotiations. She told CNS the bishops were within their rights to reopen churches and that their decision to press Walz to act was appropriate.

She said she hoped Minnesota’s example could be a model for other states where churches are being treated “unequally” in comparison with businesses and other entities that are opening rapidly. “It’s hard to justify treating churches differently,” she said.

Such a situation under the coronavirus pandemic highlights the question of balancing the right to worship as enshrined in the First Amendment and the responsibility of government officials to protect the public from undue harm.

Some churches, however, none of them Catholic, have decided to challenge still-in-place closure orders through the courts.

Tom Brejcha, president and chief counsel at the Thomas More Society, said the lawsuits are necessary because governors have overstepped their bounds and have declined to ensure people’s religious freedom.

“The critical thing (under some governors’ orders) is the churches are singled out for discriminatory treatment,” Brejcha told CNS.

Discriminatory treatment was the subject of a May 19 letter from the U.S. Justice Department to California Gov. Gavin Newsom. It challenged the “unequal treatment of faith communities” in the state’s coronavirus reopening plan. Assistant Attorney General Eric Dreiband warned that continued restrictions on worship services threatened believers’ civil rights to practice their religion.

“Simply put, there is no pandemic exception to the U.S. Constitution and its Bill of Rights,” Dreiband wrote.

On May 25, Newsom announced new guidance allowing houses of worship to safely reopen. The guidelines require attendance to be capped at 25% of a building’s capacity or at 100 people, whichever is lower. The policy takes effect for the first 21 days of a county public health department’s approval of the resumption of religious services within their jurisdiction.

Questions about the reopening of churches and guidance for that process remain in a vacuum, leaving individual states to resolve them. There are no formal standards from the Centers for Disease Control and Prevention on how churches can reopen.

A page on the CDC website only offers “interim guidance” for houses of worship. While the information presented outlines commonsense steps — social distancing, the need to regularly sanitize facilities and the importance of using face masks in public, monitoring of staff and volunteers — the guidance maintains its interim characterization.

It does not appear that formal guidance for reopening houses of worship amid the pandemic is coming any time soon after a more definitive plan was put on hold May 19 following disagreement between the CDC and the White House, which has resisted placing any limits on religious institutions, The Washington Post reported.

That leaves dioceses to develop their own reopening plans in conjunction with local and state public health officials. Those efforts are moving forward at different paces and are largely dependent on the path of the disease in any one community.

In the Archdiocese of Los Angeles, for example, churches can begin to open to the public the first week of June only for personal prayer if they implement approved safety guidelines, including adhering to strict sanitary and social-distancing measures. They could be allowed to offer daily Mass to the public as soon as June 3 under such guidelines. The earliest date these churches could have Sunday Mass would be June 7, the feast of the Most Holy Trinity.

The Baltimore Archdiocese reiterated in a May 22 statement that churches would reopen when it is safe to do so. While many businesses in Maryland have begun reopening under a plan from Gov. Larry Hogan, the archdiocese has decided to await guidance from local, state and federal public health officials before resuming in-person Masses, said Mary Ellen Russell, an archdiocesan spokeswoman.

“I think we fully recognize the incredible hunger that many of our parishioners have of the sacraments, and want to answer that as soon as we possibly and safely can,” she told CNS.

Many other dioceses around the country, though, have begun celebrating daily Mass publicly in anticipation of being ready for regular weekend Masses — with limits on attendance and social distancing in place — in time for the feast of Pentecost May 30-31.

One Texas Catholic parish may have opened a bit early as that state began to emerge from its lockdown in early May.

Holy Ghost Parish in Houston resumed Masses May 2 as part of Texas Gov. Greg Abbott’s plan to reopen the state from coronavirus restrictions in phases.

The church closed again after five of the Redemptorist priests assigned to the parish tested positive for COVID-19, the illness caused by the virus. One priest, Father Donnell Kirchner, 79, died of pneumonia May 13. Health officials were determining whether he contracted the virus before he died.

A posting on the parish website dated May 25 said five of the priests were in self-imposed quarantine after testing positive for the virus May 14. None of the priests have experienced symptoms related to the illness, the posting said.

Despite the lawsuits, a recent survey revealed that prohibitions and limits on in-person religious services during the pandemic don’t seem to bother Americans.

Kraig Beyerlein, director of the Center for the Study of Religion and Society at the University of Notre Dame, and three other researchers surveyed 1,002 adults on their views of the shutdowns and whether they believed religious freedom principles were being violated by government-imposed restrictions on houses of worship.

Nearly two-thirds of respondents — 66% — said they did not believe religious freedom was violated by government-imposed prohibitions on in-person religious services in the survey conducted April 30-May 4 for the University of Chicago Divinity School and The Associated Press-NORC Center for Public Affairs Research.

The survey also found that 82% of respondents said they felt that government restrictions on religious services, such as limiting attendance and imposing social distancing, did not violate religious practice.

“I think we were a little bit surprised in part maybe because of what you hear in the media. That was the whole point of the survey. What do average Americans think about these issues and not a couple of media stories” Beyerlein said.

The survey also found that 9% of people said they think there should be no restriction on worship even during a pandemic.

“The majority of the American people don’t see a conflict between religious freedom and protecting public health,” Beyerlein said. “The lawsuits seem to be a minority position in the U.S., at least according to our data.”

The survey has an error of margin of plus or minus 4.2 percentage points.