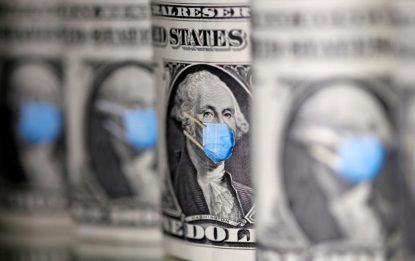 U.S. dollars are seen with face masks during the coronavirus pandemic in this illustration photo. Dioceses are helping parishes tap revenue streams while Masses are canceled because of the health crisis. (CNS photo/Dado Ruvic, Reuters)

WASHINGTON (CNS) — With Sunday Mass offertory collections virtually nonexistent during the coronavirus pandemic, dioceses are helping their parishes tap into revenue sources to help keep one crisis from becoming a second crisis.

One such revenue source is the Paycheck Protection Program loans from the federal Small Business Administration. Nearly $700 billion in loans were made available in two separate laws passed since mid-March, when the World Health Organization declared the coronavirus a pandemic and a national emergency was declared by the White House.

The latest indication is that about 8,000 of the United States’ 17,000 parishes have successfully applied for loans, according to Patrick Markey, executive director of the Diocesan Fiscal Management Conference.

Parishes have had about an 80% success rate in applying for a PPP loan, Markey told Catholic News Service in a May 4 phone interview from DFMC headquarters in Phoenix. “The CFOs I’ve talked to, or bishops have said, that in some cases it’s been a lifesaver — or in some cases, extremely helpful,” he added.

Markey said that, in some cases, parishes did not have the wherewithal to complete the loan application. But diocesan staff, once equipped with parish financial records, were able to fill out the application for the pastor’s signature.

“We looked at our parishes. We realized that a number of our parishes don’t have any online giving,” said Aad de Lange, chief finance officer and business manager for the Archdiocese of Galveston-Houston, Texas.

The archdiocese configured its website so that any visitor to it could make a donation. People “basically could donate to the website, you can go to a dropdown menu to see who you want to donate to. The money comes to the archdiocese and we drop it into the account of the parish. It’s pretty simple but it works,” de Lange told CNS.

“I would say 30 to 50 parishes that didn’t do anything now see money coming in — of course some more than others.”

There are also several e-giving firms that work with Catholic parishes to move parishioners to an electronic collection envelope. The Galveston-Houston Archdiocese has been picking up the costs of registering, according to de Lange.

“Fortunately what I’ve seen in the drop in collections that I’m seeing is not as big as anticipated,” he said. “The last number I’ve seen is 52%, so we’re talking 48% for the month of April, which is much better than what I would have anticipated.”

In the Archdiocese of Washington, the archdiocese has sent both email and postal reminders to Catholics in its database to give to their parish, according to Joseph Gillmer, executive director of development for the archdiocese. Some parishes have taken that step as well, he added.

The e-giving option is looking more and more attractive to pastors as parishes are nearing two months without any Sunday Masses — and Sunday offertories.

“It’s been fascinating,” Gillmer told CNS. “We had about 36 parishes out of 139 that did not have an online giving option. Now, it is 124 that do and 15 that don’t. So that is rapidly changing. We’ve been begging parishes to do this for a long time: ‘You really, really need this. You’ve got to make it as easy as possible for someone to support you.'”

He added, “We anticipate in the next four weeks, the small number remaining, that number will fall to maybe four or five. This is important now for the pandemic; otherwise, folks are going to have to remember to mail stuff to you. The average (donation) for online giving is higher, and it’s a recurring gift” with no summertime falloff due to vacations.

Gillmer said the archdiocese also has a “needy parish fund” for parishes in low-income areas of the archdiocese that are still called on to help poor neighbors. “The church is not closed,” Gillmer said, “just deployed in a creative way.”

An email solicitation for the fund has brought results. “Just three emails got us $40,000,” he said. “I expect that we will get $100,000” before the appeal concludes. “I’ve had a couple people talking to me, ‘Are you taking a cut of that?'” Gillmer laughed, before his serious reply: “No. We don’t take any processing costs.”

Gillmer said practically every U.S. diocese is looking at ways to aid their parishes. Giving them help now has put other fundraising in the back seat. Easter season, he noted, would be the time for the archdiocese to issue follow-up reminders about the annual archdiocesan appeal. That has been delayed.

“We see this as far more important,” Gillmer said. “This is absolutely critical. Parishes need help right now.” He added that those services funded by diocesan appeals were “critically important prior to the pandemic. But a lot of them are putting their actions on hold. A lot of bishops understood this immediately and started doing these things without being pushed.”

Bishops will have other daunting challenges, the DFMC’s Markey said.

Just one example: “What’s going to happen to our other institutions? Our schools, which are tuition-driven. How do we save our schools?” Given the need to keep students, families, teachers and staff safe, “we will have to spend money to make them safe,” Markey noted.

Given the dictate for social distancing, he added, “we may have to have fewer students. You have to think through these things, and when you think through these things, all those things mean money. … What about parents who have lost jobs, or have had reduced hours? How are they going to make a tuition payment? How do we retain our students? Those are big questions up there,” Markey said.

“We don’t have all the answers, but certainly we trust in God.”

NEXT: Our Lady of America apparitions not supernatural, bishops say