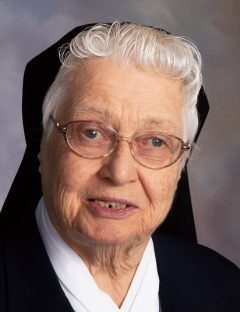 Sister Regina Cordis, I.H.M., died May 6 of natural causes in Camilla Hall, Immaculata. She was 86 and in the 66th year of her religious life.

From 1956 to 1993 Sister Regina taught children in grades five through eight in Philadelphia, Brookhaven and Hatboro. In 1993 she was a clerical assistant at St. William Parish, Philadelphia for 11 years.

In 2001, Sister Regina began serving in a variety of outreach ministries including pastoral caregiving, which involved visiting the sick and elderly, and the bereavement ministry. In 2007 she resided at Villa Maria House of Studies and served as an integral member of the Novitiate Formative Community through 2009.

Sister Regina then returned to caregiving ministries at St. Pius X Parish in Broomall until 2014 when she went to Camilla Hall to continue her ministry of service in the Apostolate of Prayer, where she served the sisters there with kindness and compassion until her death.

The funeral Mass and interment were celebrated privately May 9 at Camilla Hall with Father William E. Dean as celebrant and homilist. A memorial Mass will be celebrated at a future date.

Sister Regina is predeceased by parents, her brothers James and John and her sister Jane Lowry (Joseph). She is survived by her sisters Mary Hagerty (Stanley), Josephine Stott (Vic) and her sister-in-law Patricia, along with nieces and nephews, grandnieces, grandnephews and her local community at Camilla Hall and the congregation of I.H.M. Sisters.

NEXT: Pastor of St. John Cantius Parish dies at 67 from COVID-19