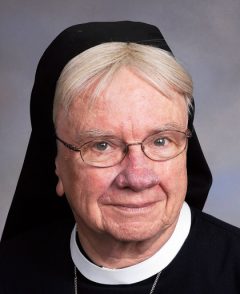 Sister Irene Loretta Cassady, I.H.M., died May 7 in Nazareth Hospital, Philadelphia from complications due to the COVID-19 virus.

At age 86, she was an active vice principal of St. Matthew School in Philadelphia, and was in the 68th year of her religious life.

(See how the parish mourned her death and celebrated the memory of her life, here.)

Barbara Virginia Cassady was the daughter of parents Irene (Buczkowski) and John Francis Cassady of St. Joan of Arc Parish in Philadelphia. She attended the parish school and graduated from Little Flower High School in 1952.

She entered the Sisters Servants of the Immaculate Heart of Mary on Sept. 8, 1952, received her I.H.M. habit on March 9, 1953 and her religious name, Sister Irene Loretta. She pronounced her first vows on March 9, 1955.

Later, while in the community, she graduated from Immaculata College with an A.B. in math and from Villanova University with an M.A. in math.

From 1969 to 1975, she served as principal and superior at Queen of Heaven School/Convent in Erlton, N.J. From 1975 to 1988 she served as an educational community supervisor for the IHM sisters.

In 1988, delegates to the General Chapter elected Sister Irene Loretta to serve the community as third councilor on the I.H.M. Leadership Team. At the death of one of the council members, Sister Irene became the second councilor. In 1994 delegates reelected her as first councilor.

At the conclusion of her terms in office, Sister Irene served as superior/principal at St. Charles Parish in Drexel Hill for seven years and then in the same capacity at Sacred Heart Parish in Havertown for six years.