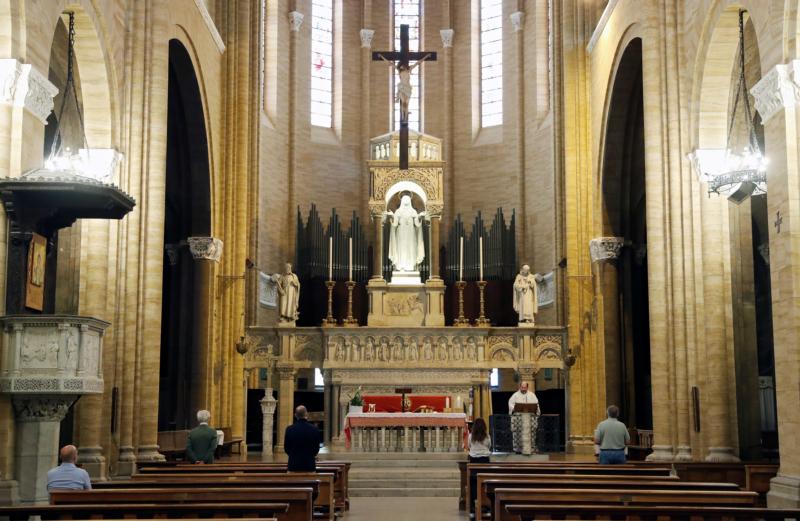 A priest celebrates Mass for a small congregation at St. Teresa of Avila Church in Rome, May 18, 2020, during the COVID-19 pandemic. (CNS photo/Remo Casilli, Reuters)

ROME (CNS) — As Italian Catholics prepared to celebrate Pentecost, the second Sunday with Masses permitted with a limited number of faithful, bishops and priests were still debating whether to continue livestreaming Masses as well.

After a 10-week ban, Masses with the faithful were allowed again beginning May 18. The number of people permitted to attend is determined by the size of the church building, the possibility of keeping people safely distanced from one another and the enforcement of measures such as everyone wearing masks.

But people who have a fever or have been in contact in the previous 14 days with someone who tested positive for COVID-19 are not allowed to attend. And the national health service still was recommending that elderly people and people with certain ailments stay home as much as possible.

Avvenire, the daily newspaper of the Italian bishops’ conference, noted a debate in Italy about whether livestreamed Masses should be “suspended, like the pope did, to encourage people to return to participating in person at the Eucharist,” or should they be continued with a congregation for those who “cannot leave home or still do not feel it is right for various and respectable reasons.”

Pope Francis’ last livestreamed Mass from the chapel of his residence was May 17, although the next day the Vatican broadcast the Mass he celebrated in St. Peter’s Basilica at the tomb of St. John Paul II to mark the 100th anniversary of the Polish pope’s birth.

Commenting on the decision to stop the live broadcasts, Andrea Tornielli, editorial director for the Dicastery for Communication, noted that many people would miss the morning celebration, “but, as Francis himself said, there is a need to return to the communal familiarity with the Lord in the sacraments (by) participating in the liturgy in person.”

Archbishop Lauro Tisi of Trent said he would continue his livestreamed Masses through June “because we cannot forget that not everyone can come in yet,” particularly the elderly and the sick.

But the livestream also is important for the people who are present in the church for the Mass, he said. Those able to attend “must not forget that a good part of the community is still at home, and they must feel united, must feel longing and understand the suffering” of a community that still is not whole.

“I worry about the risk that in this phase (of the reopening) an individualistic approach to living the sacrament will prevail without recognizing that there always must be a community moment — lived even with those who are at a distance if they are unable to attend,” Archbishop Tisi said.

Father Tonino Lasconi, a pastor in the Marche region, told Avvenire he was continuing his online Masses because families truly gathered to participate in the liturgy — not just watch it — during the lockdown. “The virtual helped us live through a delicate moment, but it was not unreal. It was living reality in a different way.”

But Father Dino Pirri, a pastor in Grottammare, worried that parishes rushing to get something online actually increased division among Catholics, “multiplying links without reflection” and creating a vast menu of “take-away” liturgies for each Catholic to pick and choose from.

Bishop Pietro Maria Fragnelli of Trapani halted his online Masses once the public could return to the liturgies, although he did so thanking on Facebook everyone who had been present with him the previous 10 weeks.

“It’s always difficult for a pastor to say ‘no,’ especially when you see how the communications media had a unique value,” the bishop said, “but at the Mass for the Ascension (May 21), I had the joy — after 80 days — of meeting the Christian community in flesh and bones again.”

Father Alessandro Palermo, a pastor in Marsala, also was stopping the livestreams. “It’s one thing to celebrate face-to-face and another to do so knowing that there are people on the other side of the screen listening to you and watching.”

Even if the number of people allowed into the church at one time is limited, he said, people can come to weekday Masses. “Let’s celebrate Mass without telephones and cameras; let the people come back,” he told Avvenire.

NEXT: Italian founder of ecumenical community told to leave