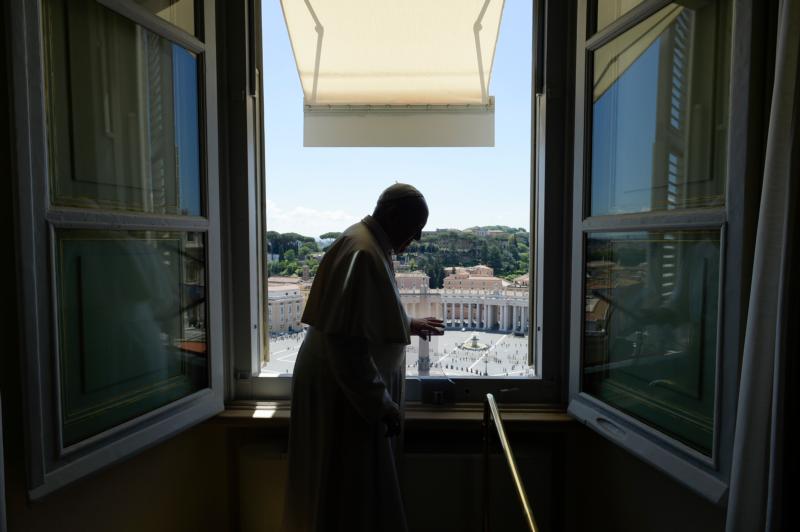 Pope Francis finishes leading the "Regina Coeli" from the window of his studio overlooking St. Peter's Square at the Vatican May 31, 2020. The pope led the Sunday prayer from his window for the first time in three months after the square was reopened. The pope had been delivering the weekly prayer virtually due to lockdown measures. (CNS photo/Vatican Media)

VATICAN CITY (CNS) — As pain, fear and anger fueled riots across the United States, Pope Francis wrote to the priests of the Diocese of Rome, urging them to learn from the suffering of the coronavirus and start building new communities of care for one another.

“Dear brothers,” he wrote, “as a priestly community we are called to announce and prophesy the future, like the sentinel announcing the dawn that brings a new day: Either it will be something new, or it will be much, much worse.”

Pope Francis said he wanted to write the letter, released by the Vatican May 30, the eve of Pentecost, because he had not been able to celebrate the Holy Week chrism Mass with the priests of his diocese.

The letter made no mention of what was happening in the United States, but it did trace an outline of attitudes and actions Christians should have in facing the aftermath of the epidemic and forging a new way of relating to others.

Pope Francis also said he had heard from many priests about the suffering and challenges they faced as they watched parishioners die from the coronavirus or work to the point of exhaustion in health care and other essential services, yet the lockdown meant they could not celebrate Mass with their people or, in most cases, visit face to face with people who were hurting.

Yet, the fact that Easter occurred during the lockdown should make people think, he said. For Catholics, “the Resurrection is not only a historical event of the past to be remembered and celebrated; it is more, much more: It is the proclamation of the salvation of a new time … the future that the Lord calls us to build.”

“Faith allows us a realistic and creative imagination, capable of abandoning the logic of repetition, replacement or preservation,” he said. “It invites us to establish an ever-new time: the time of the Lord.”

The coronavirus, “an invisible, silent, expansive and viral presence” put the whole world in crisis, the pope wrote. In response, Christians should let the “discreet, respectful and non-invasive” presence of the Holy Spirit “call us again and teach us not to be afraid to face reality.”

“If an impalpable presence has been able to disrupt and overturn the priorities and seemingly irremovable global agendas that so suffocate and devastate our communities and our sister earth,” he said, “let us not fear that it is the presence of the Risen One that traces our path, opens horizons and gives us the courage to live this historic and unique moment.”

As he often has done, the pope reminded priests that when Jesus appeared to the disciples after the resurrection, he still bore the wounds of his crucifixion.

The wounds, he said, are a sign of the “harsh and unjust” treatment Jesus endured and should encourage Christians “not to turn our backs on the harsh and difficult reality of our brothers and sisters.”

Pope Francis prayed that the risen Lord would teach them “to accompany, heal and dress the wounds of our people” with boldness, courage, concern and joy.

They should reach out, he said, “with the reconciling embrace of the father who knows forgiveness; with the piety, gentleness and tenderness of Mary of Bethany; (and) with the meekness, patience and intelligence of the Lord’s missionary disciples.”

Pope Francis urged the priests to learn from the faith of their people in a way that would “shape and temper our shepherd hearts with meekness and compassion, with the humility and magnanimity of active, supportive, patient and courageous resistance, which does not remain indifferent, but denies and unmasks all skepticism and fatalism.”

“The Resurrection is the announcement that things can change,” he insisted. And believing in the Resurrection should “lead us creatively to the places where hope and life are fighting, where suffering and pain become a context favorable to corruption and speculation, where aggression and violence seem to be the only way out.”

NEXT: Pandemic an opportunity for service to others, pope says